The Indian agriculture acts of 2020, often referred to as the Farm Acts are three acts initiated by the Parliament of India in September 2020. After having been approved by the Lok Sabha and the Rajya Sabha, the President of India gave his assent to the bills on 27 September 2020. In this article, you can read all about the farm acts of 2020, which are in the news very often. This is a part of the UPSC Syllabus under current affairs, economy, agriculture and polity.

In November 2021, the Prime Minister in an address to the nation announced that the three farm laws would be repealed in the wake of the unending protests by some of the farmers. The government will bring in a single bill in Parliament to repeal the three acts. All boards and offices that were constituted for implementing the provisions of the laws would also cease operations and any decision made by the boards would be null and void (some states had tried to operationalise the laws during the brief six-month period). 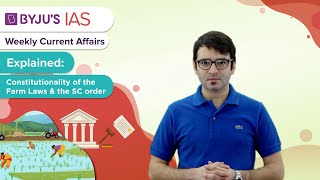 The following are the three acts passed and their salient provisions.

The Farmers’ Produce Trade and Commerce (Promotion and Facilitation) Act, 2020:

Arguments in Favour of the Farm Acts

The Farmers' Produce Trade and Commerce (Promotion and Facilitation) Act, 2020

Addressing the lacunae of APMC acts:

One India, one agricultural market:

Arguments against the Farm Acts

Some of the farmer organizations and others have called the acts corporate-friendly and anti-farmer and have expressed the fear that the new acts may hurt the farmers’ interests. The bills have faced strong protests mainly from Punjab farmers and from opposition parties.

The Farmers' Produce Trade and Commerce (Promotion and Facilitation) Act, 2020:

Against the spirit of federalism:

Fears with respect to MSP system:

The constitutional validity of the acts:

The Farmers’ Produce Trade and Commerce (Promotion and Facilitation) Act, 2020:

These Farm Acts, their effects and the significance of repealing them are important for the upcoming UPSC exam.

What are the 3 farm laws?

The three farm laws are: The Farmers’ Produce Trade and Commerce (Promotion and Facilitation) Act, The Essential Commodities (Amendment) Act and The Farmers (Empowerment and Protection) Agreement on Price Assurance and Farm Services Act.

Under which list the subject of agriculture falls in the constitution?

Agriculture falls in the state list under the Constitution of India. However, the existence of Entry 33 in the concurrent list gives both the Centre and states the power to control production, supply and distribution of products in trade and commerce related to agriculture.