Foreign direct investment (FDI) is an investment made by a company or an individual in one country into business interests located in another country. FDI is an important driver of economic growth. This is an important topic for the Indian economy segment of the UPSC syllabus.

Any investment from an individual or firm that is located in a foreign country into a country is called Foreign Direct Investment.

The investment climate in India has improved tremendously since 1991 when the government opened up the economy and initiated the LPG strategies. 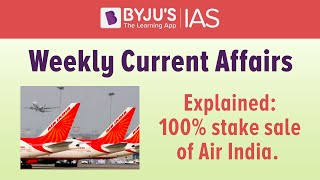 There are three routes through which FDI flows into India. They are described in the following table:

In the automatic route, the foreign entity does not require the prior approval of the government or the RBI.

Under the government route, the foreign entity should compulsorily take the approval of the government. It should file an application through the Foreign Investment Facilitation Portal, which facilitates single-window clearance. This application is then forwarded to the respective ministry or department, which then approves or rejects the application after consultation with the DPIIT.

Sectors where FDI is prohibited

There are some sectors where any FDI is completely prohibited. They are:

According to the new FDI policy, an entity of a country, which shares a land border with India or where the beneficial owner of investment into India is situated in or is a citizen of any such country, can invest only under the Government route.

A transfer of ownership in an FDI deal that benefits any country that shares a border with India will also need government approval.

Investors from countries not covered by the new policy only have to inform the RBI after a transaction rather than asking for prior permission from the relevant government department.

FDI brings in many advantages to the country. Some of them are discussed below.

However, there are also some disadvantages associated with foreign direct investment. Some of them are:

Regulatory Framework for FDI in India

In India, there are several laws regulating FDI inflows. They are:

As of July 2020, the Foreign Direct Investment in India totalled up to 3269 million.

Which country has the highest FDI in India?

In which sector is Foreign Direct Investment prohibited?

Which country has the highest FDI in the world?

The United States remained the largest recipient of FDI, attracting 1 billion in inflows, followed by China and Singapore.