Agriculture in India is an important topic from the civil services examination’s point of view. It comes under UPSC Mains GS 3. This article talks about various issues regarding Indian Agriculture. It will aspirants of the IAS Exam and other competitive examinations.

Learn about crops-related topics from the links below:

Potential: Facts about Agriculture in India

The Productivity of Agriculture in India 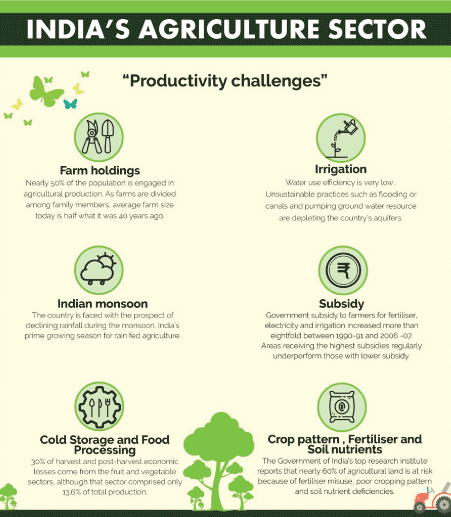 Poor penetration of forward and backward linkages in Agriculture

India has poor rural roads affecting the timely supply of inputs and timely transfer of outputs from farms. In other areas regional floods, poor seed quality and inefficient farming practices, lack of cold storage, and harvest spoilage cause over 30% of farmer’s produce going to waste, lack of organized retail, and competing buyers thereby limiting Indian farmer’s ability to sell the surplus and commercial crops.

Read about PM FME Scheme that is initiated to developed micro-food processing enterprises.

In 2012, the National Crime Records Bureau of India reported 13,754 farmer suicides. Farmer suicides account for 11.2% of all suicides in India. Activists and scholars have offered several conflicting reasons for farmer suicides, such as

Learn more about Farmer Suicides in India by referring to the linked article.

The farm credit system in Indian agriculture evolved over decades has been instrumental in enhancing the production and marketing of farm produce and stimulating capital formation in agriculture.

Credit for Indian agriculture has to expand at a faster rate than before because of the need to step-up agricultural growth to generate surplus for exports, and also because of change in the product mix towards animal husbandry, aquaculture, fish farming, horticulture and floriculture, medicinal plants, which will necessitate larger investments.

Why is it important?

Read in detail about Farm Loan Waiver in the linked article.

According to Parshuram Ray, director of the New Delhi-based Centre for Environment and Food Security, the loan waiver was “an electoral sop that involves a lot of statistical juggleries and very little of real hope for Indian farmers.”

An important feature of the program which has been heavily criticized is that it covers only formal sources of credit and excludes any kind of informal loan. Thus, while it benefitted wealthy and large-scale farmers who had access to institutional credit (about 23% of the total number of farmers), small and marginal farmers, who borrow the majority of their funds from private moneylenders, would not benefit from the scheme.

Another criticism of this scheme was that it might cripple the agricultural credit system.

Doubling the real income of farmers till 2022-23 over the base year of 2015-16 requires annual growth of 10.41 percent in farmer’s income. This implies that the on-going and previously achieved rate of growth in farm income has to be sharply accelerated. Therefore, strong measures will be needed to harness all possible sources of growth in farmers’ income within as well as outside the agriculture sector.

The major sources of growth operating within the agriculture sector are:

The sources outside agriculture include:

Read the Gist of Kurukshetra – October 2019 on Agricultural Reforms in the linked article.

The index ranks states based on their initiatives taken in implementing the provision of seven farm sector reforms. These reforms have been proposed under the model APMC Act, joining the e-NAM initiative, special treatment to fruits and vegetables for marketing, and level of taxes in mandis. States are ranked based on scores on the scale ranging from 0 to 100. The minimum score of 0 implies no reforms at all and a score of 100 means the state is friendliest to farmers. The index identifies three major parameters. They are:

Read about e-NAM in the linked article. 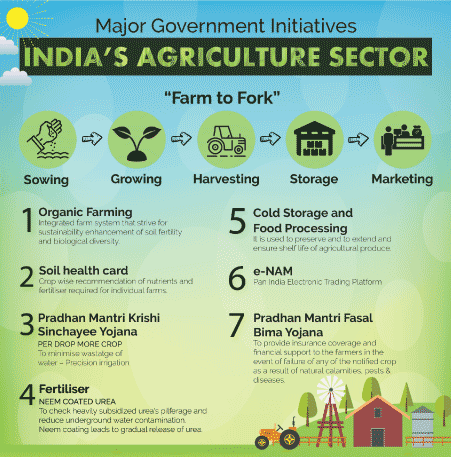 The primary objectives of PMKSY are:

Read in detail about Pradhan Mantri Krishi Sinchayee Yojana in the linked article.

The Department of Agriculture & Cooperation formulated a  Central Sector Scheme for the Promotion of National Agriculture Market through  Agri-Tech Infrastructure Fund (ATIF)  through the provision of the common e-platform.

Read the objectives of National Agriculture Market (NAM) in the linked article.

Paramparagat Krishi Vikas Yojana is an elaborated component of Soil Health Management (SHM) of major project National Mission of Sustainable Agriculture (NMSA). Under PKVY Organic farming is promoted through the adoption of the organic village by cluster approach and PGS certification.

The new Crop Insurance Scheme is in line with the One Nation – One Scheme theme.  It incorporates the best features of all previous schemes and at the same time, all previous shortcomings/weaknesses have been removed. There a few
Mechanisation

Mechanization has the potential to change many agricultural output challenges as it will lead to higher productivity and economic contribution. Yet, it has been inaccessible to farmers for a long time, largely due to economic reasons. With small land ownership and constant fragmentation, small and marginal farmers find it almost impossible to own a tractor. To make agriculture economically viable ICAR started many initiatives.

Know in detail about the Mega Food Park Scheme in the linked article.

India is the largest producer of fruits and the second-largest producer of vegetables in the world. Despite that per capita availability of fruits and vegetables is quite low because of post-harvest losses which account for about 25% to 30% of production. The Task Force on cold-chain development in India had suggested in its report to establish a National Centre for Cold-chain Development (NCCD) in India as an autonomous center for excellence to be established as a registered society to work in close collaboration with industry and other stakeholders to promote and develop integrated cold-chain in India for perishable F&V and other perishable allied Agri – commodities to reduce wastages and improve the gains to farmers and consumers substantially.

Food processing levels are quite low in India at 3% when compared to 30-70% in developed countries and wastage of agriculture produce is as high as 40%. National Food Processing Mission was launched to address these problems and create the potential for higher revenues. The objectives of the program are:

Promote Primary processing centers close to the farms and link them with Clusters through the hub and spoke models.

Facilitate exports of high-value products like Cheese, Peanut butter, etc. and encourage such facilities through subsidies.

But the performance of this scheme, on the whole, has left us much to be desired with warehouses, processing facilities have not been developed.

In the absence of APMC reforms, contract farming and private procurement are virtually absent.

Taking note of increasing incidents of leasing in and out of the land and suboptimal use of land with a lesser number of cultivators, NITI Aayog has formulated a Model Agricultural Land Leasing Act, 2016 to both recognize the rights of the tenant and safeguard the interest of landowners. A dedicated cell for land reforms was also set up in NITI.

The campaign to provide soil health cards with nutrient information of soil would help the farmers to educate about the most viable and appropriate cropping pattern suiting the climatic conditions in the region. Shortage of infrastructure like soil testing labs is hindrances but it‘s a move in the right direction.

Read about Soil Health Card Scheme in the linked article.

From the last two years, the MSP has tried to address the issues of higher MSP in cereal and lower in Pulses and oilseed. The recent move to increase pulses MSP by 7% in the move towards the Crop-neutral MSP regime.

Get more information on Agricultural Revolutions in India from the linked article.

R&D is the future

The recent initiatives taken by the Government are steps taken in the right direction. The agreements signed between India and Israel further underscore the fact of how water management and judicious usage of limited resources is vital for a thriving agricultural sector.

FAQ about Issues In News Agriculture In India

What are the main problems of agriculture in India?

How can we improve agriculture in India?