Rajya Sabha TV programs like ‘The Big Picture’, ‘In Depth’ and ‘India’s World’ are informative programs that are important for UPSC preparation. In this article, you can read about the discussions held in the ‘Big Picture’ episode on “India- Sri Lanka Relation” for the IAS exam. 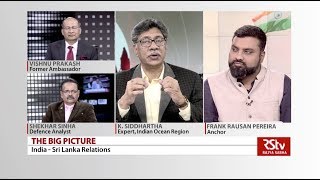 How important is Sri Lanka for India to achieve its objectives?

What is the relevance of the Indian Ocean Rim Association (IORA)?

India shares a common cultural and security space with neighbouring countries in the South Asian region, especially Sri Lanka. As a prominent Asian nation with critical national interests in South Asia, India has a special responsibility to ensure peace and stability in its closest neighborhood. India is trying to reach out to Sri Lanka in an asymmetric manner. It should stay invested in Sri Lanka while the two countries recognize the legitimacy of each other’s concerns and operate in a way that is mutually beneficial.