NCERT notes on important topics for the UPSC civil services exam. These notes will also be useful for other competitive exams like banking PO, SSC, state civil services exams and so on. This article talks about the Vakatakas of ancient India.

The Satavahanas in peninsular India were succeeded by the Vakatakas (local power) who ruled the Deccan for more than two and a half centuries. The Vakatakas were the contemporaries of the Guptas in northern India. In the Puranas, the Vakatakas are referred to as the Vindhyakas. The Vakatakas belonged to the Vishnuvriddha gotra of the Brahmanas and performed numerous Vedic sacrifices. A large number of copperplate land grant charters issued by the Vakatakas to the Brahmans have helped in reconstructing their history. They were Brahmins and promoted Brahmanism, however, they also patronised Buddhism. Culturally, the Vakataka kingdom became a channel for transmitting Brahmanical ideas and social institutions to the south. The Vakatakas entered into matrimonial alliances with the Guptas, the Nagas of Padmavati, the Kadambas of Karnataka and the Vishnukundins of Andhra. The Vakatakas patronised art, culture and literature. Their legacy in terms of public works and monuments have made significant contributions to Indian culture.

Under the patronage of the Vakataka king, Harisena, the rock-cut Buddhist Viharas and Chaityas of the Ajanta caves (World Heritage Site) were built. Ajanta cave numbers ⅩⅥ, ⅩⅦ, ⅩⅨ are the best examples of Vakataka excellence in the field of painting, in particular the painting titled Mahabhinishkramana. Vakataka kings, Pravarasena Ⅱ (author of the Setubandhakavya) and Sarvasena (author of Harivijaya) were exemplary poets in Prakrit. During their rule, Vaidharbhariti was a style developed in Sanskrit which was praised by poets of the likes of Kalidasa, Dandin and Banabhatta.

Also read about the Gupta Empire in the linked article. 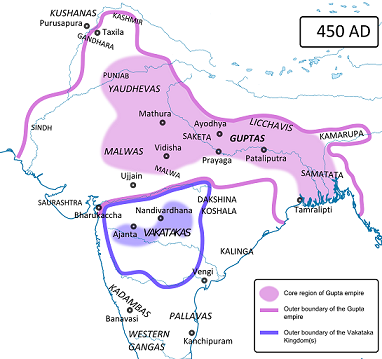 The Vakataka kingdom extended from the southern extremities of Malwa and Gujarat in the north to the Tungabhadra River in the south, and from the Arabian Sea in the west to the edges of Chhattisgarh in the east.

This branch ruled over Pravarapura (in present Wardha, Maharashtra), Mansar and Nandivardhan in the present Nagpur district.

This branch ruled over the territory between the Sahyadri Range and the Godavari River with its capital at Vatsagulma (present Washim, Maharashtra). Its founder was Sarvasena, the son of Pravarasena Ⅰ.

With the death of Harisena, the rule of the Vakatakas ended and the Nalas, the Kadambas, the Kalachuris and Yashodharman of Malwa occupied their territory.