The Red Panda (Ailurus fulgens) is a carnivore native to the eastern Himalayas and southwestern China. Despite its name it is not related to the giant panda.

The red panda is the only living member of the genus Ailurus and the family Ailuridae.

This article will further give details about the Red Panda within the context of the IAS Exam.

Characteristics of the Red Panda

The red panda is easily recognised by its characteristic reddish-brown fur on the upper parts and blackish fur on the lower part. Its skull is roundish with medium-sized upright ears, its nose is black, and its eyes are blackish.

Its teeth are robust. Its long, bushy tail with six alternating transverse ochre rings provide balance and excellent camouflage in a habitat with moss- and lichen-covered trees. The legs are black and short with thick fur on the soles of the paws. 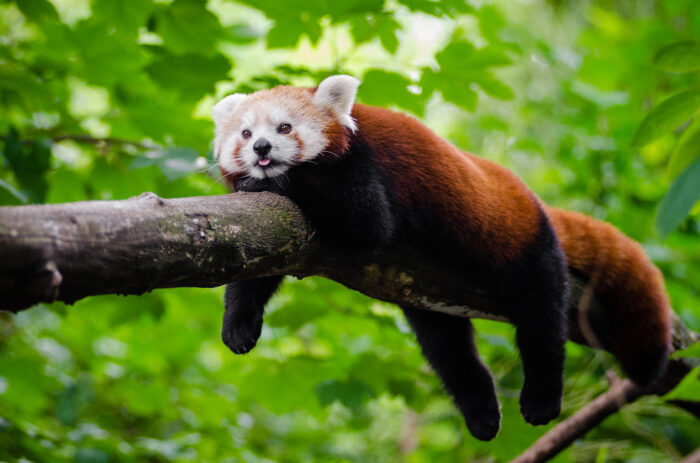 Further characteristics of the Fishing Cat is given in the table below:

Characteristics of the Red Panda

Behaviour and Habitat of the Red Panda

The Red Panda is native to the temperate forest of the Himalayas and ranges from the foothills of western Nepal to China in the east. Its easternmost. It is found in mountain ranges of Tibet, Sikkim, Assam Bhutan and south-western China.

The Red Panda is territorial and solitary except during mating season. It is both nocturnal and crepuscular as in being active during twilight hours, sleeping on tree branches or in tree hollows during the day and increasing its activity in the late afternoon and early evening hours.

It sleeps stretched out on a branch with legs dangling when it is hot, and curled up with its tail over the face when it is cold. It is very heat-sensitive, with an optimal “well-being” temperature between 17 and 25 °C.

Red pandas are excellent climbers and forage from trees. Their diet consists of mainly mambos but may also eat small mammals, birds, eggs, flowers and berries. Just like the giant panda they cannot digest cellulose and hence must consume large volumes of bamboo as they are easily digestible.

A red panda’s life span ranges between eight and 10 years, but individuals have been known to reach 15 year.

Conservation Status of the Red Panda

The red panda has been listed as endangered on the IUCN Red List since 2008 because the global population is estimated at about 10,000 individuals, with a decreasing population trend;

Due to its shy and secretive nature, and its largely nocturnal habits, observation of red pandas is difficult. Therefore, population figures in the wild are determined by population density estimates and not direct counts. It is protected in all range countries, and hunting is illegal.

A 40% decrease in red panda populations has been reported in China over the last 50 years, and populations in western Himalayan areas are considered to be lower.

An estimated 14,500 Red Pandas are left in the wilds of Nepal, India, Bhutan, Myanmar and China

Deforestation can inhibit the spread of red pandas and exacerbate the natural population subdivision by topography and ecology, leading to severe fragmentation of the remaining wild population.

India has 20 protected areas with known or possible red panda populations in Sikkim, Arunachal Pradesh, and West Bengal such as Khangchendzonga, Namdapha and Singalila National Parks, and a coordinated conservation policy for the red panda.