The Sir Creek dispute between India and her neighbour Pakistan is a long-standing border dispute with origins in pre-independence India. Despite the issue not taking centre stage amidst the larger canvas of India-Pakistan relations, it is an important one for various factors. In this article, you can read all about the origins and course of the dispute, along with the way forward. This is an important topic in the UPSC exam International Relations segment.

Sir Creek is a 96 km strip of water in the marshes of the Rann of Kutch in Gujarat. It is a disputed region between India and Pakistan. The creek roughly separates the Kutch region in India and Pakistan’s Sindh province. Sir Creek opens up into the Arabian Sea. It was originally named Ban Ganga and was named Sir Creek during colonial times after a British official.

What is the dispute? 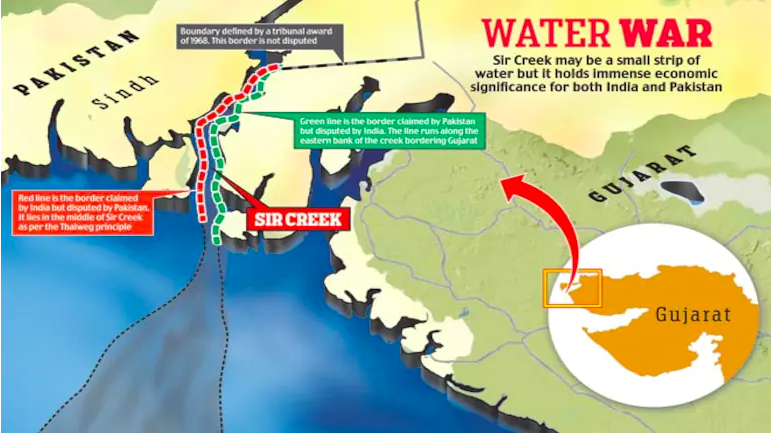 Origins of the Sir Creek Issue

The dispute originated in 1908 when the ruler of Kutch and the government of Sindh sparred over the collection of firewood from the creek area.

Why is Sir Creek Important?

Sir Creek is a strategically important region and Indian and Pakistani troops had clashed in the Rann of Kutch in the 1965 war. It is an important fishing ground and is one of the largest fishing sources in Asia. Another reason for its significance is the possible presence of oil and gas reserves under the sea in that area. It is currently unexplored because of the ongoing border dispute. The area is also of great ecological importance with it being home to flamingoes and other species of migratory birds in the winters.

After the 1965 war, the then British PM Harold Wilson intervened and both India and Pakistan set up a tribunal to resolve the dispute.

It is important to find a resolution to the long-standing issue that is acceptable to all parties. Many innocent fishermen are caught and arrested by the other country when they accidentally stray across the perceived border. It would be to the benefit of both countries if this issue, considered a low-hanging fruit in the basket of disputes between the two countries, is amicably resolved.