In this article, you can read about several issues concerned with India’s relations with its neighbour Pakistan.

The India Pakistan relations are one of the most complex associations that India shares with any of its neighbouring countries. In spite of the many contentious issues, India and Pakistan have made major strides in reducing the “trust deficit” over the past few years.

India desires peaceful, friendly and cooperative relations with Pakistan, which requires an environment free from violence and terror. The two countries share linguistic, cultural, geographical and economic links but due to political and historical reasons, the two share a complex relation.

From the IAS Exam perspective, the relation between India and Pakistan is an important topic and aspirants must be aware of the latest bilateral development between the two countries.

In February 2021, India and Pakistan issued a joint statement for the first time in years, announcing that they would observe the 2003 ceasefire along the Line of Control (LoC). The countries have agreed to a strict observance of all agreements, understandings and cease firing along the Line of Control (LoC) and all other sectors with effect from the midnight of February 24-25, 2021. In the interest of achieving mutually beneficial and sustainable peace along the borders, the two Directors General of Military Operations agreed to address each other’s core issues and concerns which have the propensity to disturb peace and lead to violence. 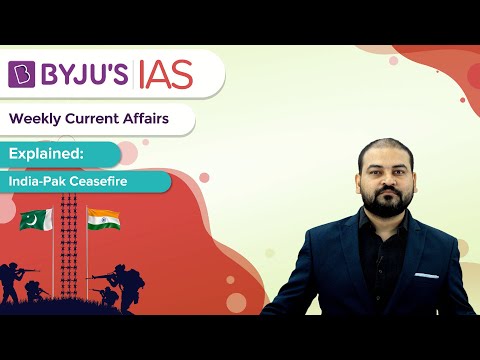 A Brief Background of India-Pakistan Relations

Aspirants can also get details about the Indian-International relations in the links given below:

Conflict Zones between India and Pakistan

There have been a few constant factors which have led to the complex bilateral ties between the two countries. Discussed below are these factors as per the latest developments released by the Government authorities, as of February 2020:

Cross border terrorism is one of the biggest factors for the disrupted relations between India and Pakistan.

The figures for India Pakistan bilateral trade in the last 6 years is as follows:

The trade agreement has also faced a downfall when it comes to the relations between India and Pakistan. In 2019, after the Pulwama terror attack, India hiked customs duty on exports from Pakistan to 200% and subsequently, Pakistan suspended bilateral trade with India on August 7, 2019.

There are two major routes via which trade is commenced between the two countries:

In the two days meeting both sides discussed Pakal Dul Hydroelectric Power Project (HEP), Lower Kalnai HEP and reciprocal tours of Inspection to both sides of the Indus basin. Subsequently, a delegation led by PCIW inspected Pakal Dul, Lower Kalnai, Ratle and other hydropower projects in the Chenab Basin between January 28 and 31, 2019.

Read in detail about the Indus Water Treaty at the linked article.

Aspirants can know in detail about the Kartarpur Corridor at the linked article and know its religious and social importance.

This is one of the most sensitive issues between India and Pakistan and has been a major cause of the sour relations the two countries share.  Article 370 gave Jammu and Kashmir a special right to have its own constitution, a separate flag and have their own rules, but in August 2019,  the Article was scrapped off and J&K now abides by the Indian Constitution common for all. It was given the status of a Union Territory and this move of the Indian Government was highly objected by Pakistan due to their longing of owning Kashmir entirely.

Trade Agreement between India and Pakistan

The two countries had signed a Trade agreement which was mutually beneficial for both. Discussed below are the ten Articles of the Trade Agreement:

Article I – exchange of products shall be done based on the mutual requirement of both the countries, ensuring common advantages

Article II – With regard to the commodities/goods mentioned in Schedules ‘A’ and ‘B’ attached to this Agreement, the two Governments shall facilitate imports from and exports to each other’s territories to the extent permitted by their respective laws, regulations and procedures

Article IV – With respect to commodities/goods not included in Schedules ‘A’ and ‘B’ export or import shall also be permitted in accordance with the laws, regulations and procedures in force in either country from time to time

Article VI – There are a few exceptions for Article V

Article IX – For proper implementation of the agreement, meetings can be done every six months

Article X – The Trade Agreement between the two countries waa effective from February 1, 1957

Candidates can get the detailed UPSC Syllabus for the Prelims and Mains examination at the linked article and can start their preparation accordingly.

Also, to get the latest exam updates, preparation strategy and study material, turn to BYJU’S for assistance.

Q 1. What is the biggest cause of concern between India and Pakistan relations?

Ans. The cross border terrorism is the biggest cause of concern regarding the complex association between the two countries. Terrorism emanating from territories under Pakistan’s control remains a core concern in bilateral relations. India has consistently stressed the need for Pakistan to take credible, irreversible and verifiable action to end cross border terrorism against India and fulfil its assurances. The possession over the territory of Kashmir is another major issue.

Q 2. What was the Indus Water Treaty and between who was it signed?

Ans. The India-Pakistan boundary drawn after independence was right across the Indus basin leaving Pakistan as the lower riparian. A dispute thus arose between the two countries regarding the utilization of irrigation water from existing facilities. To find a resolution and set rules for negotiations, the Indus Water Treaty was signed between India and Pakistan on September 19, 1960, in Karachi.