India Japan Relations UPSC –  Japan and India are partners in peace, with a common interest in and complementary responsibility for promoting the security, stability and prosperity of Asia as well as in advancing international peace and equitable development. At the beginning of the 21st century, Japan and India resolved to take their bilateral relationship to a qualitatively new level. The foundation for this was laid when Mr. Yoshiro Mori, Prime Minister of Japan and Shri Atal Behari Vajpayee, Prime Minister of India agreed during the landmark visit of Mr. Mori to India in August 2000 to establish the “Global Partnership in the 21st Century”.

India-Japan relation is an important topic covered in the International Relations segment of the UPSC Mains Exam.

India’s relations with other countries are important for the international relations UPSC syllabus. In this article, you can get a few insights into the relations India has with Japan for the IAS exam.

Read in detail about the Regional Comprehensive Economic Partnership (RCEP) on the given link.

Rarely before in recent memory has Japan gone so much out of its way to welcome a foreign leader as it did when it received Prime Minister Narendra Modi. His counterpart, Shinzo Abe, broke protocol in both receiving Modi in Kyoto and spending the weekend with him in that old imperial capital. With India and Japan moving from emphasising shared values to jointly advancing shared interests, their ties already constitute Asia’s fastest-growing bilateral relationship. Abe and Modi, however, wish to turn this blossoming partnership into a defining element in Asia’s strategic landscape so that Japan and India serve as key anchors of a stable power balance.

The rationale bringing India and Japan closer together is powerful: If China, India and Japan constitute Asia’s strategic triangle – with China representing Side A (the longest side of this scalene triangle), India Side B and Japan Side C — the sum of B plus C will always be greater than A. In the absence of a Japan-India axis, the rise of a Sino-centric Asia could become inevitable. Containing China, however, is not an option. China is the largest trading partner of both Japan and India, which cannot afford to disrupt their relationship with Beijing. The key issue for India and Japan is how to address Asia’s current power disequilibrium, triggered by the rapid rise of an increasingly assertive China that is seeking to disturb the territorial and maritime status quo. An entente between Asia’s two main democracies can help restore a fair degree of equilibrium to the power balance.

Chemistry Between Abe And Modi Abe and Modi represent the best chance for establishing an enduring entente. The two are ideological soulmates, belong to the 1950s generation, share the zodiac sign of Virgo, and regard each other as friends. Indeed, like two buddies meeting after a long time, Modi and Abe greeted each other with a bear hug and glowing and beaming smiles. The Abe-Modi affinity has been fostered both by personal chemistry and hard-nosed calculations about the importance of Indo-Japanese collaboration in their plans to revitalise their countries’ economy and security and restore national pride. International relations theory assumes that interstate relations are shaped by impersonal forces, especially cold calculations of national interest. In truth, history is determined equally, if not more, by the role of personalities, including their personal strengths and foibles and their search for national security and respect.

Theory Of International Relations And Exceptions Of India-Japan

Abe sees India as the key to expanding Japan’s security options beyond its current US-centric framework, while Modi views Japan as central to the success of India’s ‘Look East’ strategy. ‘Abenomics’ and ‘Modinomics’ are both geared to the same goal – reviving laggard growth — yet they need each other’s support for success.

Whereas Tokyo sees New Delhi as important to its own economic-revival strategy, India looks at Japan as a critical source of capital and commercial technology and a key partner to help upgrade its infrastructure and manufacturing base. Abe’s reassertion of the right of collective self-defence and his relaxation of Japan’s self-imposed arms export ban have opened the path to closer military cooperation with India, including co-production of weapon systems.

India — the biggest recipient of Japanese aid — has already become one of the largest destinations for Japanese FDI among major economies. The two countries’ dissimilarities actually create opportunities to generate strong synergies through economic collaboration. Japan has a solid heavy manufacturing base, while India boasts services-led growth. India is a leader in software and Japan a leader in hardware.

India has the world’s largest youthful population, while Japan is aging more rapidly than any other major developed country. Whereas Japan has financial and technological power, India has human capital and a huge market.

The China Factor Japan clearly has an interest in a stronger, more economically robust India. Just as Japan assisted China’s economic rise through large-scale aid, investment and technology transfers for over three decades — a role obscured by the recent flare-up of disputes — it is ready to help India become an economic powerhouse on par with China, a consideration that prompted Abe to pledge a whopping $35 billion in new assistance.

China, by contrast, has little interest in aiding India’s economic ascent. Beijing boasts a booming trade with New Delhi, but that commerce bears a distinct mercantilist imprint and shows India in an unflattering light: China exports three times as much as it imports and treats India as a raw material supplier and a market for its finished goods. This asymmetry is made more glaring by China’s minuscule FDI in India. 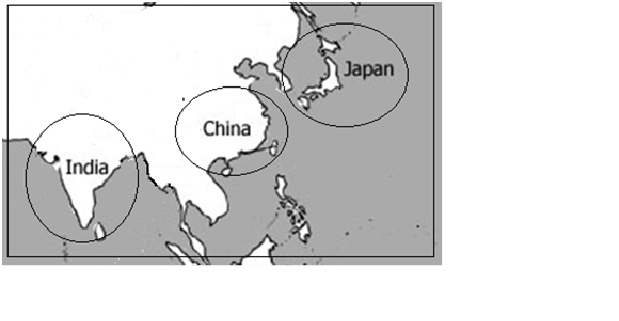 Challenges Ahead A challenge for Modi is to correct the lopsided trade and calibrate China’s market access to progress on bilateral political, territorial and water disputes, or else Beijing will fortify its leverage against India. After all, China does not shy away from making efforts to block the rise of India and Japan, including by stepping up military pressure on them and opposing the expansion of the UN Security Council’s permanent membership. After charming Nepal and Bhutan on highly successful visits, Modi’s landmark trip to Japan has not only helped to define the parameters for Asia’s new democratic alliance but also set in motion the addition of concrete strategic content to this ‘special strategic and global partnership’ — its formal name. The entente holds the potential to revive the two countries’ economic fortunes, catalyse their emergence as world powers, reshape the Asian strategic landscape and impel a tectonic geopolitical shift.

What is the economic relation between India and Japan?

Japanese companies, such as Yamaha, Sony, Toyota, and Honda have manufacturing facilities in India. With the growth of the Indian economy, India is a big market for Japanese firms. Japanese firms were some of the first firms to invest in India.

What are the infrastructure projects of Japan in India?

Japan has helped finance many infrastructure projects in India, most notably the Delhi Metro system. Indian applicants were welcomed in 2006 to the JET Programme, with one slot available in 2006 and increasing to 41 slots in 2007.