The Unification of Germany into the German Empire, dominated by Prussia with a federalist structure was announced on 18 January 1871 in the Hall of Mirrors at the Palace of Versailles in France. This event would have a major impact on European politics for decades.

Background of the Unification of Germany 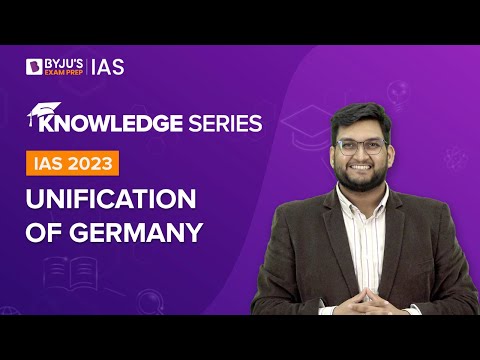 Before unification, Germany was a collection of small kingdoms that came into existence following the Treaty of Verdun in 843. These kingdoms would form the basis of the Holy Roman Empire. Yet, there was no homogenous German identity until the 19th century. This was in part due to the autonomy of the princely states and most inhabitants not ruled directly by the Emperor of the Holy Roman Empire largely identified with their prince instead of the German emperor

This system of having small states within the empire was called “practice of kleinstaaterei” or “practice of small states”. It was during the onset of the Industrial Revolution that brought about an improvement in transportation and communication, ultimately bringing far-flung regions in close contact with each other

The scenario changed upon the defeat and dissolution of the Holy Roman Empire by France during the Napoleonic Wars in 1806. Even though a German Confederation was re-established following the French defeat in 1815, a huge wave of German nationalism swept through the region at the beginning of the 19th century. This wave of nationalism gave rise to the demands of a centralized authority by the mid 19th century.

The rise of Prussia

To know what are the important events in world history from 3000 BC to 1950 AD, visit the linked article

Prussia, the easternmost state of the German Confederation was one such state. It had briefly attempted unification of the German confederation under its rule in 1848 until the combined power of other states, with support from the Austrian Empire, foiled it.

With the appointment of Otto von Bismarck as the Prime Minister of Prussia, the situation began to change.

Otto von Bismarck had a burning ambition to transform Prussia into a formidable power and avenge the humiliating loss at Austria’s hands years before. To this end, he brought major reforms into the Prussian army that made it into the most disciplined and professional fighting force in that part of the world.

The war that followed in 1866 (known as the Seven Weeks War) saw Prussia dealing a heavy blow on Austria and its German allies. So profound was the victory that it ended Austrian interference in German matters and allowed Prussia to lay the foundations of its own empire.

However, this would not be enough. Bismarck knew that only a new war with an old enemy would unite other German states, who had been traditional rivals of Prussia, to throw in their lot with the new Prussian empire. That enemy would be France

France was ruled by Napoleon III, the nephew of Napoleon Bonaparte. Unlike his uncle, Napoleon III would lack both political acumen and military skill. He would become a perfect target for Otto von Bismarck’s machinations.

Through a series of clever diplomatic manoeuvres and subtle provocations, Bismarck managed to provoke Napoleon III into declaring war against Prussia. The seemingly aggressive move by the French was enough to restrain other European powers from supporting Napoleon III. The result in the German states was a wave of anti-French sentiments.

When Bismark marched the Prussian Army towards the French border in July 1870, they were joined by armies of the other German states. The resulting war would prove devastating for France with the most notable defeat being at Sedan in September 1870. It was enough for Napoleon III to tender his resignation as emperor to the French parliament and live out the rest of his life in England. But the war with the Prussians still continued regardless.

The war would continue until the fall of Paris to the Prussian Army in January 1871. In the meantime, Bismarck had gathered the German general’s princes and Kings at Versailles and declared King William I of Prussia as the Emperor of the German Empire on January 18.  On the same day, the new Constitution of the German Confederation came into force, thereby significantly extending the federal German lands to the newly created German Empire with Prussia at its helm.

As for the French, furious and smarting under the humiliation of their own monuments being used to further the cause of their enemies, they would avenge their defeat decades later

To know more about other Government Exams, visit the linked article

Result of the German Unification

The Unification of Germany was a watershed moment in European history that would forever change its political landscape. With the arrival of a new unified German nation onto European politics, the other powers took note with mixed feelings of appreciation, awe and fear. An appreciation that a new state would change the balance of power within continental Europe, awe at the fact that motley collection of bickering German state could band together to defeat a common foe in such a short span of time and fear at the prospect of facing a new powerful enemy whose military prowess was unmatched by any European army at the time.

The new German state would for the first time write its own chapter on colonialism when it undertook expeditions to Africa and Asia. This naturally brought the German Empire into conflict with its European neighbours in the continent and elsewhere. The aggressive approach would further antagonise other nations such as Britain, France and Russia. The animosity between them would spark the fires of the first world war in 1914, which would end the German Empire through the Treaty of Versailles (whose terms were dictated by France) in 1919, ironically in the very same halls where the German Empire was first proclaimed.

How did the process of German Unification take place?

In the 1860s, Otto von Bismarck, then Minister President of Prussia, provoked three short, decisive wars against Denmark, Austria, and France, aligning the smaller German states behind Prussia in its defeat of France. In 1871 he unified Germany into a nation-state, forming the German Empire.

What was the impact of unification of Germany?

The unification of Germany fundamentally altered the delicate “balance of powers” established by the Congress of Vienna with the creation of a large, wealthy, and powerful nation-state in central Europe. Moreover, it is a useful case study for the broader concept of “nationalism” as a historical agent.

For more preparation materials they can refer to the links given in the table below: