Smog is the term derived from two words smoke and fog. It is a kind of intense air pollution. The word smog was coined in the 20th century. This article lucidly explains all the important information about smog; ranging from how it is created, harmful effects, different types, and measures that can be adapted to control Smog. 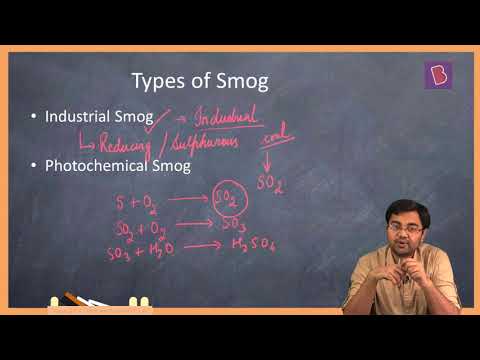 Smog is air pollution that reduces visibility. The word “smog” was coined in the early 20th century, and is a contraction (portmanteau) of the words smoke and fog to refer to smoky fog due to its opacity, and odour.

The word was then intended to refer to what was sometimes known as pea soup fog, a familiar and serious problem in London from the 19th century to the mid-20th century.

This kind of visible air pollution is composed of nitrogen oxides, sulphur oxides, ozone, smoke and other particulates. Man-made smog is derived from coal combustion emissions, vehicular emissions, industrial emissions, forest and agricultural fires and photochemical reactions of these emissions.

How is Smog created?

Smog is the result of the reaction of emissions from automobiles, factories, and industries with the sunlight and atmosphere.

Why is Smog Harmful to Health?

When smog is inhaled, it may cause the following harmful effect on humans

The causes behind the formation of the smogs are different. Hence they are classified into 2 different types.

Which is the Most Commonly Occurring Smog?

Photochemical smog is the most common occurring smog.

Sulfurous smog is the result of a high concentration of sulfur oxides in the atmosphere. This is usually caused by the burning of fossil fuels like coal.

Where Do We Find Smogs?

How Long Does it Take to Form a Smog?

The time required to form a fog is directly dependent on the temperature.

How to Control Smog?

Also read about Stubble Burning which is one of the major concerns for the smog in the national capital, Delhi.