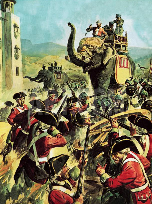 On 31 August 1751, the English East India Company’s forces led by Robert Clive captured Arcot, the capital of the Nawab of Carnatic (Arcot), Chanda Sahib. This event changed the landscape of British and French colonialism in the subcontinent. This siege was part of the Second Carnatic War. This is an important part of modern Indian history for the IAS exam.