Fifth national conference of the Ocean Society of India (OSI) 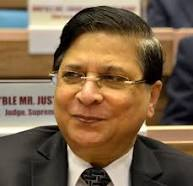 Article 124 of the Constitution of India provides for the manner of appointing judges to the Supreme Court. Though no specific provision exists in the Constitution for appointing the Chief Justice, who, as a result, is appointed like the other judges conventionally, the outgoing CJI recommends the name of the senior-most judge (i.e. by date of appointment to the Supreme Court) for appointment by the President of India, as his successor.

Seniority at the apex court is determined not by age, but by:

2. Over the years, major questions on institutions of minority education

What is a minority educational institution?

Does the Constitution provide for minority educational institutions?

3. Centre set to roll out new treatment for encephalitis Basic Information
What is encephalitis?

What are the causes of encephalitis?

What is Japanese encephalitis?

How can the disease be prevented?

Is the disease prevalent in India? How severe is it? Salient features of the guidelines issued

Significance of this move

4. Forex reserves: The problem of plenty

So how can the central bank deal with this problem of plenty?

The system would offer oil spill advisory services, high wave alerts, port warnings, forecast along the ship routes in addition to tsunami and storm surge warnings and help in search and rescue operations. Seniority at the apex court is determined not by age, but by:

Reverse tranche are part of IMF.

Influenza A (H1N1) virus is the subtype of influenza A virus that was the most common cause of human influenza in 2009. H1N1 flu is also known as swine flu caused by swine influenza virus that is endemic in pigs.

PM, CM of all states and of UT’s with legislature make the members of the council.

Prime Minister of a country “A” have border dispute with country “B” and also have infrastructural problem within the country.

Country B is called for resolving both border issue and invest in infrastructural development.

But a day before meeting Country B attacks A at border and kills 20 soldiers. What is the dilemma in this situation? What is your future course of action?

Neighbours are not chosen; friendly relationship among them is of prime importance. PM has the responsibility to defend his/her country’s all round interests.

The conflict is about the democratic opinion and national interest in long run.

Positives to invite the PM of country B

Negatives to avoid the PM of country B