The anti­ Citizenship (Amendment) Bill protests have brought demands of the Adivasis or tea tribes in Assam to the forefront.

A study tracing the growing burden of cancer in India states that most of the increase in cancer incidences are attributable to its epidemiological transition and improvement in the use of cancer diagnostics.

No evidence of cancer in Indus Valley sites

In order to promote the uptake of the Internet in rural areas, the government has promised free Wi-Fi to about 48,000 villages, which are connected through the government’s flagship Bharatnet project, for three months from January to March 2020.

Crops in Gujarat are under attack from grasshoppers known as locusts that have flown in from Pakistan. 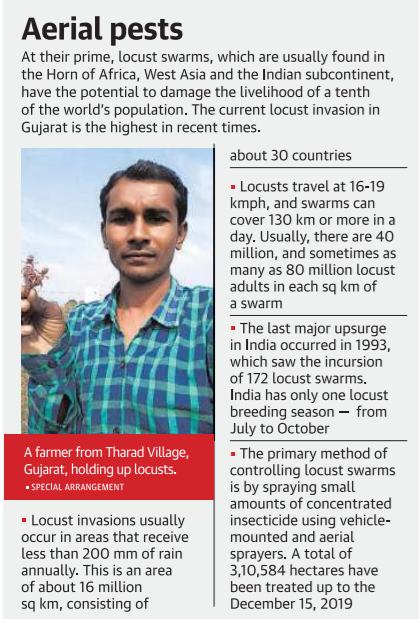 Recently, the Cabinet Committee on Security (CCS) approved the creation of a Chief of Defence Staff (CDS) who will be the single-point military adviser to the government as suggested by the Kargil Review Committee.

Government think-tank NITI Aayog Member Ramesh Chand made a case for only two slabs under the Goods and Services Tax (GST) regime as against the current multiple slabs, and said rates should be revised annually, if required.

With the passing of the Recycling of Ships Act, India aims to garner at least 60% of the global ship recycling business and emerge as a key destination for recycling warships and other ships.

The concerns of such an exercise:

3. The return of the secular

The ongoing protests against CAA & NRC have reignited the debate on secularism. Young protesters across India have brought Gandhi’s vision of the secular into the public discourse.

2. 35 civilians killed in the terrorist attack in Burkina Faso

Explanation: The Food and Agriculture Organization (FAO) is a specialized agency of the UN. In 2004, it adopted the Voluntary Guidelines to support the Progressive Realization of the Right to Adequate Food in the context of national food security, also known as the Right to Food Guidelines. Its objective is to guide states to implement the right to food. It is not legally binding, but it directed the states to oblige to their commitment under international law, by implementing access to food as a legal right.

Explanation: The Atal Bhujal Yojana is jointly funded by the World Bank and the Central government through regular budgetary support.

Explanation: Burkina Faso is a landlocked West African state and was a colony of France.