A study of inscriptions on clay tablets recovered from recent excavations at Moghalmari, a Buddhist monastic site of the early medieval period in West Bengal’s Paschim Medinipur district, have confirmed the presence of two monasteries — Mugalayikaviharika and Yajñapindikamahavihara.

The government has launched a central accident database management system that will help in analysing causes of road crashes and in devising safety interventions to reduce such accidents in the country.

How does it works?

2. SC not to review Sabarimala case, to examine ‘larger issues’

A nine-judge Bench led by Chief Justice of India Sharad A. Bobde have said that its objective was not to review the Sabarimala women entry case but examine “larger issues” of law arising from practices. 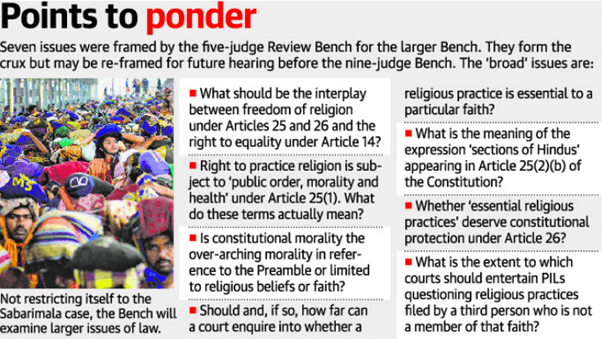 What is Retail Inflation?

2. Govt. gets cracking on GST evaders with data analytics

The Department of Revenue has identified as many as 931 cases of fraudulent GST (Goods and Services Tax) refund claims through data analytics and has now tasked the GST data analytics wing to scrutinise all past and pending refund claims filed all over the country for inverted duty structure.

Apache attack helicopters and Chinook heavy lift helicopters, which were recently inducted into the Indian Air Force (IAF), will make their debut over Rajpath during the Republic Day flypast on January 26, 2020.

1. In the name of self-defence

The killing of Soleimani:

The threat to cultural sites:

“The slow economic growth is having a visible impact on payroll creation. In FY19, India had created 89.7 lakh new payrolls, as per Employees’ Provident Fund Organisation (EPFO) data. In FY20, as per current projections, this number could be at least 15.8 lakh lower,” State Bank of India’s (SBI) group chief economic adviser has said in a report.

Indian Railways has invited interested parties to submit a Request for Qualification (RFQ) document for selection of private parties to operate 150 passenger trains on 100 routes.

176 people on board Ukrainian International Airlines died in the crash, minutes after the plane took off from Tehran airport. After days of denials, Iran said that its military had shot down the plane in a “disastrous mistake”.  Iran defended its actions stating that the plane was downed as it flew near a sensitive military base during a time of heightened tensions.

1. Lava gushes from Philippine volcano as ash spreads to Manila

A volcano near Manila spewed a massive cloud of ash that drifted across the Philippine. Authorities said there was a risk that an eruption could cause a tsunami in the lake.

Which of the given statement/ s is/are incorrect?

Both the statements are correct. Taal is one of the world’s smallest active volcanoes. It is the second most active volcano in the Philippines. It lies along the Pacific “Ring of Fire”.

The meaning of ITC can be easily understood with the words ‘input’ and ‘tax credit’. Inputs are materials or services that a manufacturer purchase in order to manufacture his product or services which is his output. Tax credit means the tax a producer was able to reduce while paying his tax on output. Input tax credit means that when a manufacturer pays the tax on his output, he can deduct the tax he previously paid on the input he purchased. Here, while paying the tax on his output, he can deduct or take credit for the tax he paid while purchasing inputs.

The Raisina Dialogue is a multilateral conference committed to addressing the most challenging issues facing the global community. Every year, global leaders in policy, business, media and civil society are hosted in New Delhi to discuss cooperation on a wide range of pertinent international policy matters. The conference is hosted by the Observer Research Foundation, an independent think tank, in collaboration with the Ministry of External Affairs of India. It is a multilateral conference held annually.

Consumer Price Index (CPI) is released by the Central Statistics Office of the Ministry of Statistics and Program Implementation.