1. In last academic year, only 22% schools had Internet

Union Education Minister has released the Report on Unified Information System for Education Plus (UDISE+) 2019-20 for School Education in India. 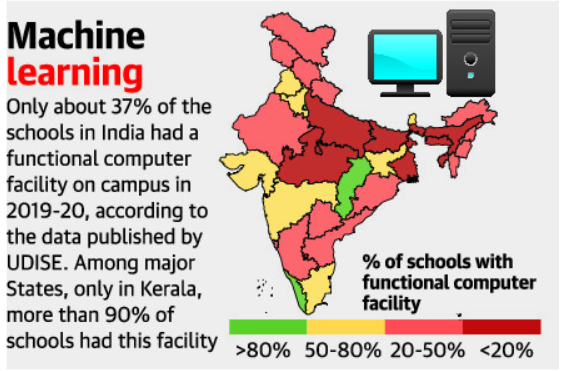 Nine European countries have given recognition to the Covishield vaccine produced by the Serum Institute of India (SII).

The World Health Organization (WHO) has said that any COVID-­19 vaccine it has authorised for emergency use should be recognised by countries as they open up their borders to inoculated travellers.

2. ‘Talks between Lanka and India are necessary’

Tamil Nadu Chief Minister is of the view that talks between India and Sri Lanka are necessary to find a permanent solution to the attacks on Tamil Nadu’s fishermen by the Sri Lankan Navy.

India has sought Maldivian government action on persons behind media reports and social media posts attacking the dignity of its resident diplomats.

Army Chief said that capabilities were being developed to deal with the drone threat.

This issue has been covered in  PIB Summary & Analysis for 10th June 2020.

1. What lies ahead for IBC and stressed assets resolution?

Performance over the years:

Progress of the scheme:

For detailed information on the smart cities mission, refer to:

Recommendations for the post-pandemic phase:

Social aspects of a smart city: