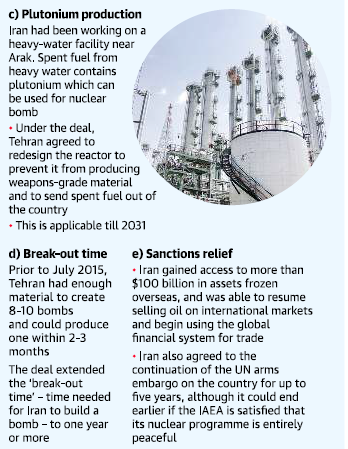 Why was this decision taken?

What about its future?

But the question is whether Europe and other powers will stick together to respect the mandate of an international agreement, or buckle under American pressure. If they do cave in, West Asia will be a lot more dangerous.

2. Effect on India after USA withdrawal from Iran Nuclear Deal

President Donald Trump’s decision to withdraw the US from the Joint Comprehensive Plan of Action (JCPOA) with Iran is likely to set off a period of uncertainty in West Asian geopolitics, and a churn in the global order.

New Delhi, for its part, enjoys cordial relations with all the actors involved:

It aims at mainstreaming tribal community by promoting primary level value addition to Non Timber Minor Forest Produce (MFP) at grassroots level. It also aims to promote MFPs-centric livelihood development of tribal gatherers and artisans. Through this initiative, the share of tribals in the value chain of Non-Timber Forest Produce is expected to rise from present 20% to around 60%.

Implementation: It will be implemented through Ministry of Tribal Affairs at Central Level and TRIFED as nodal agency at National Level. At State level, state nodal agency for MFPs and district collectors will play pivot role in scheme implementation at grassroot level.

It targets to reduce level of under-nutrition and other related problems by ensuring convergence of various nutrition-related schemes. It also targets stunting, under-nutrition, anaemia (among young children, women and adolescent girls) and low birth rate. It will monitor and review implementation of all such schemes and utilize existing structural arrangements of line ministries wherever available.