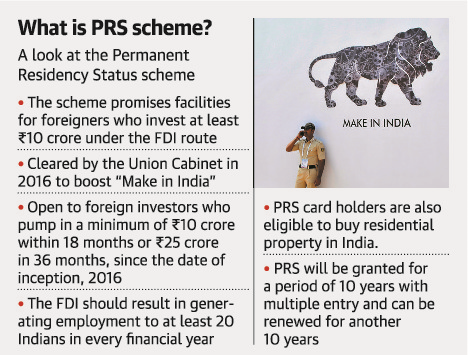 1. India gears up for AI-driven wars

1. Time to discard both dual as well as statutory audits

1. Making sense of the Wuhan reset

Permanent residency refers to a person’s visa status, i.e. the person is allowed to reside indefinitely within a country of which he or she is not a citizen. A person with such status is known as a permanent resident. Many advanced economies such as the US, UK, Canada, Germany, Australia as well as Singapore and Hong Kong have permanent residency schemes.

The permanent residency scheme in India-

The Agreement on Safeguards (“SG Agreement”) sets forth the rules for the application of safeguard measures pursuant to Article XIX of GATT 1994.

Safeguard measures are defined as “emergency” actions with respect to increased imports of particular products, where such imports have caused or threaten to cause serious injury to the importing Member’s domestic industry.

Such measures, which in broad terms take the form of suspension of concessions or obligations, can consist of quantitative import restrictions or of duty increases to higher than bound rates.

Major guiding principles of the Agreement with respect to safeguard measures are that such measures must be temporary; that they may be imposed only when imports are found to cause or threaten serious injury to a competing domestic industry; that they be applied on a non-selective (i.e., most-favoured-nation, or “MFN”, basis; that they be progressively liberalized while in effect; and that the Member imposing them must pay compensation to the Members whose trade is affected.