Prime Minister Narendra Modi is in Singapore for a two-day visit during which he will attend the East Asia Summit, an ASEAN-India informal meet, the Regional Comprehensive Economic Partnership (RCEP) summit and hold a meeting with US vice president Mike Pence.

The Law Ministry had raised the lack of a sovereign guarantee as a key “problem” associated with the Rafale deal during inter-ministerial consultations before the Inter Government Agreement (IGA) was signed on September 23, 2016.

Despite the apprehension that the cyclonic storm Gaja would come in the way of Indian Space Research Organisation – ISRO’s latest launch of latest communication satellite GSAT-29, it had a perfect launch. The feat was pulled off to perfection. 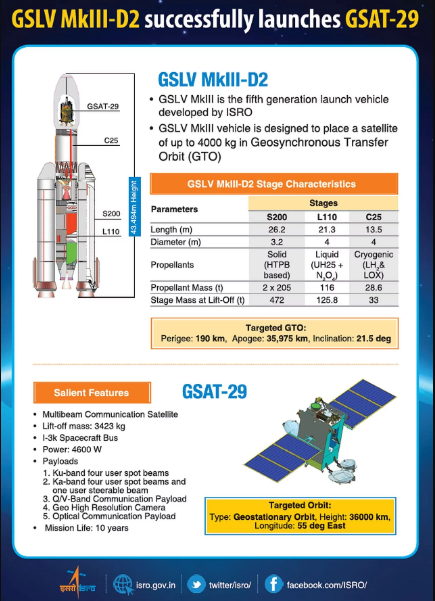 1. A question of writ

A Note on Sabarimala:

Observation made by Justice D.Y. Chandrachud:

“Issues of deep religious sentiments should not be ordinarily be interfered by the court. The Sabarimala shrine and the deity is protected by Article 25 of the Constitution of India and the religious practices cannot be solely tested on the basis of Article 14… Notions of rationality cannot be invoked in matters of religion… What constitutes essential religious practice is for the religious community to decide, not for the court. India is a diverse country. Constitutional morality would allow all to practise their beliefs. The court should not interfere unless if there is any aggrieved person from that section or religion.”

A Look at the Asia Bibi case:

The Seriousness of  Tiger-Human conflict:

A look at some important statistics: Out of 553 tiger deaths from 2012 to 2017, 22.1% were due to poaching, 15.4% were seizures, and 62.4% were attributed to natural causes and causes not attributable to poaching, according to information from the Rajya Sabha.

This article, i.e. “Full Disclosure” connects to a larger issue which has been featuring in the news for quite some time now. The issue here to be read by students in detail is the series of defaults by the IL&FS holding company and group outfits beginning in August, 2018 which set off a market-wide contagion.

We have dealt with this issue extensively over the past few weeks now. However, since another update has featured in the Hindu, we have recapped some of the points that would lend a sense of continuity with the topic especially for first-time readers of this news.

Students are advised to go through this article as it has a relevance from the perspective of the GS-3 Paper (Indian Economy).

How did this crisis take place?

To compound matters, IL&FS’s borrowings were all repayable in the short to medium-term of roughly 8-10 years.

The chokepoint for IL&FS came from the fact that its projects were stalling and not being completed due to various reasons. These reasons ranged from:

Further, with returns from these projects not coming in, IL&FS was forced to borrow more. Lenders pulled the plug leading to trouble for IL&FS.

It is important to note that assets and receivables were exaggerated in the financial statements and the top managers took home large pay-outs and continued to pay dividends to shareholders despite the financial situation. An investigation has been ordered by the Serious Fraud Investigation Office.

A Look at Certain Specifics:

It is important to note that while all fund houses have an internal valuation policy for debt instruments, it typically gets triggered only after a security is downgraded by rating agencies such as CRISIL and ICRA.

Why is the rescue important?

It is important to note that a recent report by the government sent to the Ministry of Corporate Affairs (MCA) said a default by IL&FS could have significant repercussions, including widespread redemption pressures, sell-off in the debt market, liquidity crunch and 1,500 smaller NBFCs shutting shop for lack of adequate capital.

The government further said that avoiding a default would require a combination of measures of asset sales, restructuring of some liabilities and fresh infusion of funds by investors and lenders. Currently, the RBI is believed to be looking at strengthening the regulatory framework to avoid asset liability mismatches by NBFCs.

A Look at the Current State of Affairs:

Who’m does the board comprise of?

How did the situation concerning NBFCs Precipitate?

3. No plans to give India MFN status: Pakistan

Pakistan has “no immediate plans” to grant ‘Most Favoured Nation’ (MFN) status to India, said Abdul Razak Dawood, a senior aide to Prime Minister Imran Khan on Tuesday. India has already granted this status to all World Trade Organization (WTO) members, including Pakistan.

Call money is mainly used by the banks to meet their temporary requirement of cash. They borrow and lend money from each other normally on a daily basis. It is repayable on demand and its maturity period varies in between one day to a fortnight. If it’s one day it is call money if it’s more than a day its Notice money. No collateral required. The rate of interest paid on call money loan is known as call rate.

The Geosynchronous Satellite Launch Vehicle Mark III is a launch vehicle developed by ISRO. GSLV Mk III is India’s most powerful launch vehicle yet built and it is powered by cryogenic engines. It can lift satellites weighing 4 tonnes to space; double the weight the current GSLV Mk II can lift. It will enable ISRO to launch communication spacecraft to geostationary orbits of 36000 km.

Multiple aims of INC were declared during the first session, including promotion of friendly relations between nationalist political workers throughout India, development of feeling of national unity etc. Around 400 delegates to the congress were elected in 1886. A British committee of the INC was founded in 1889 in Britain, which started a journal called India in 1890.

CERN is the world’s largest nuclear and particle physics laboratory and best known as operator of the Large Hadron Collider, which found the elusive Higgs boson in 2012. At CERN physicists and engineers are probing the fundamental structure of the universe. It is based in Geneva on the French-Swiss border. It has 22 member states and four associate member states and other associate members transitioning to full member status. India was inducted as an ‘Observer’ at CERN in 2004. India became an associate member of the CERN in 2016. The latest upgrade allows Indian companies to bid for lucrative engineering contracts and Indians can apply for staff positions at the organisation.