Two committees comprising legal luminaries have been constituted by the Home Ministry to amend various sections of the IPC.

What is the Indian Penal Code?

What is the need for amendment?

Diplomatic sources have said that, with the recent improvement in relations, India and Maldives will take forward several pending measures to promote defence cooperation.

Why is Maldives important to India?

2. Rohingya agree to move to Bay of Bengal island

Despite the fears that it is prone to flooding, it is said that thousands of Rohingya living in Bangladesh refugee camps have agreed to move to Bhashan Char island in the Bay of Bengal.

The National Tiger Conservation Authority (NTCA) has red-flagged the Madhya Pradesh government’s move to increase tourism activities inside the State’s tiger reserves in violation of the existing guidelines and asked it to take corrective steps.

2. Anthrax scare at Assam’s Pobitora sanctuary after death of 2 buffaloes

Veterinarians have confirmed anthrax as the cause of death of two Asiatic water buffaloes in central Assam’s Pobitora Wildlife Sanctuary.

Army chief Gen. Bipin Rawat has announced that the Army has taken retaliatory action against four terror camps along the Line of Control (LoC) in Jammu & Kashmir. It has destroyed at least three of those terror camps. 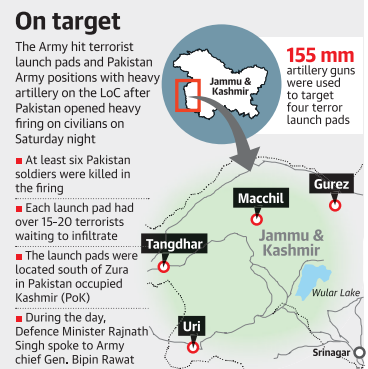 After the current action by the Indian Army, Pakistan could try and avenge it. Pakistan must pay heed to the advice of the Financial Action Task Force (FATF) and not provide any support to terrorists or cause disruption and violence across the LoC. It is in the best interest of both the neighbours to resolve all the issues amicably.

1. After Mamallapuram, the reality of asymmetry

Mamallapuram hosted the second informal summit between India and China. The informal summits are gaining increasing importance in India-China bilateral relations, marking a “new era” in bilateral relations. However, the informal summits are more of a holding operation aimed at keeping the bilateral relations intact in the face of serious differences between the two neighbours. It was the Doklam stand-off which was defused by Wuhan summit (2018); at Mamallapuram, “differences” over Jammu and Kashmir and over Indian military exercises in Arunachal Pradesh were prevented from becoming “disputes”. There is a marked difference between India and China’s bargaining power at the high tables of diplomacy and India needs to address this to be able to emerge a truly global power in a possible China dominated global order.

Attempts prior to informal summits:

There was a positive push to the bilateral relations given China’s acceptance of Sikkim being a part of India and also accommodative of India’s bid to UNSC.

There has been a considerable change in the global order since the early 2000s and this has had a profound impact on India- China relations.

The Informal summits were not expected to address or resolve any of the outstanding issues. But they conveyed the message that the leaders were keen to maintain high level and cordial engagement and dialogue, and project to the world that they are mature enough to manage differences. The practice of informal summits may be continued since they signify a positive development but India needs to take those extra measures to truly stand equal in a possibly China dominated global order in the foreseeable future.

More on this topic:

Refer the below links:

2. A time-tested way to trade away conflict

In the backdrop of tense Indo-Pak relations and the attempts for revival of normalcy in Jammu and Kashmir post the abrogation of Article 370, there is a need for cordial relationship between the two neighbours. Cross border trade and more so the cross LOC trade does appear to be a viable remedy to this.

Cross-LoC trade in its new avatar could continue to prove the value of a peace-through-trade policy, and one that has stood the test of time globally. Trade must be seen as a ray of hope to establishing peace.

The issues regarding Brexit have been covered in the following articles.

1. A case for abjuring custodial interrogation

In the recent P. Chidambaram v. Directorate of Enforcement (2019), the Supreme Court declined granting anticipatory bail during the investigation stage reasoning that such a move would hamper the investigative agency’s ability to gather evidence and ensure effective investigation and hence sent the accused to judicial custody for interrogation. With similar instance being observed in other high profile cases as well there have been questions raised on whether custodial interrogation violates the right against self-incrimination and the right to silence granted under article 20(3) of the Indian constitution.

2. Liver transplant registry off to a good start

The Constitution of India does not have any provision for criteria and procedure for appointing the CJI. Article 124(1) of the Indian Constitution says there “shall be a Supreme Court of India consisting of a Chief Justice of India”. The closest mention is in Article 126, which deals with the appointment of an acting CJI. In the absence of a constitutional provision, the procedure relies on custom and convention. The procedure to appoint the next CJI is laid out in the Memorandum of Procedure (MoP) between the government and the judiciary. Vis-à-vis the appointment of the CJI and the appointment of SC judges, the key difference is that in the former, the government cannot send the recommendation of the CJI (or the collegium) back to them for reconsideration; while in the latter, the government can do so. The Memorandum of Procedure does not have any provision for the eventuality of the government disagreeing with the incumbent CJI’s recommendation on the new one.

The UN’s 47-nation human rights group – United Nations Human Rights Council is an inter-governmental body within the United Nations system responsible for strengthening the promotion and protection of human rights around the globe and for addressing situations of human rights violations and make recommendations on them. The UNHRC was established by the UN General Assembly on March 15, 2006 to replace the UN Commission on Human Rights (UNCHR) that had been strongly criticised for allowing countries with poor human rights records to be members. The members of UNHRC are selected by the UN General Assembly on a staggered basis each year for three-year-long terms.

Imaging Infrared Spectrometer (IIRS) is one of the payloads on the Chandrayaan-2 orbiter.  IIRS is designed to measure light from the lunar surface in narrow spectral channels (bands). It has the ability to split and disperse reflected sunlight (and its emitted component) into these spectral bands. Its objective is the mapping of lunar surface over a wide wavelength range for the study of minerals, water molecules and hydroxyl present on the moon. From the reflected solar spectrum, scientists will look for signatures, including of minerals. This will help map the lunar surface composition, which in turn will help us understand the Moon’s origin and evolution in a geologic context.