The Union Cabinet approved the setting up of a High Level Committee for implementation of Clause 6 of the Assam Accord and measures envisaged in the Memorandum of Settlement, 2003 and other issues related to Bodo community.

Functions of the committee

The Bodos, an ethno-linguistic group believed to be the earliest inhabitants of Assam, are one of the Indo-Mongoloid communities belonging to the Tibeto-Burman branch of the Sino-Tibetan family. At the zenith of their thriving civilisation, they ruled vast territories encompassing almost the entirety of northeast India, parts of Nepal, Bhutan, North Bengal and Bangladesh. The Bodos are recognized as a plains tribe in the Sixth Schedule of the Indian Constitution.

A separate state(Bodoland)(within the Indian Union) be created by carving out some area of eight districts of the current State of Assam, namely Kokrajhar, Dhubri, Bongaigaon, Barpeta, Nalbari, Kamrup, Darang and Sonitpur districts. 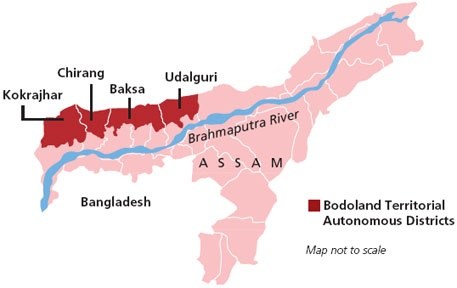 Problems in the Bodo Accord

The message by government to these groups should be that negotiations over reasonable demands can be the only option.  State’s cannot be created for politicians convenience. Any nexus between politicians and militants to gain political mileage should be rooted out, so militancy gets no leeway in the sensitive region.