CONTEXT: Union Minister of Environment, Forest and Climate Change, launched a time-bound national level strategy for pan India implementation to tackle the increasing air pollution problem across the country in a comprehensive manner in the form of National Clean Air Programme (NCAP).

“Overall objective of the NCAP is comprehensive mitigation actions for prevention, control and abatement of air pollution besides augmenting the air quality monitoring network across the country and strengthening the awareness and capacity building activities.”

WHAT IS THE CRUX OF NCAP?

Collaborative and participatory approach involving relevant Central Ministries, State Governments, local bodies and other Stakeholders with focus on all sources of pollution forms the crux of the Programme.

TARGET OF THE NCAP:

The tentative national level target of 20%–30% reduction of PM2.5 and PM10 concentration by 2024 is proposed under the NCAP taking 2017 as the base year for the comparison of concentration. 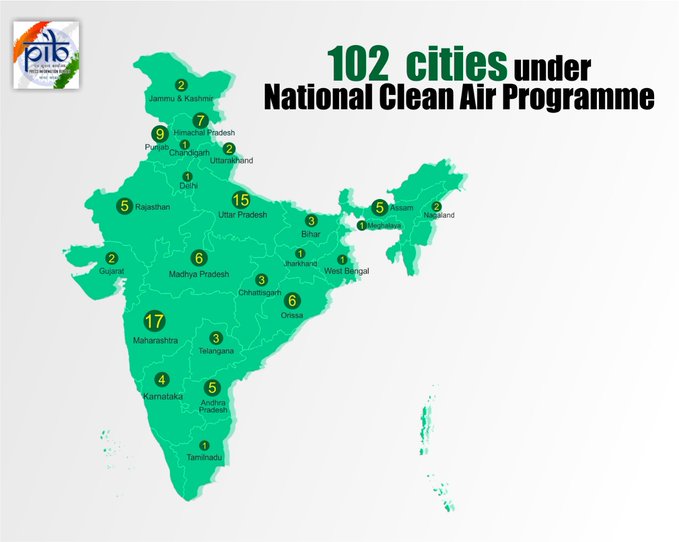 RELEVANCE AND FEATURES OF THE PROGRAMME:

CONTEXT: INDUS FOOD-II with the theme of ‘World Food Supermarket’ will be held at India Expo Mart, Greater Noida.

The event is organized jointly by Trade Promotion Council of India (TPCI) and Department of Commerce.

CONTEXT: The Sino-Indian Digital Collaboration Plaza (SIDCOP), an initiative to bring Indian IT companies and Chinese enterprises closer to each other on a single AI enabled platform was launched.

This is a partnership by National Association of Software and Services Companies (NASSCOM) with Municipal Governments of Guiyang and Dalian. A Joint Venture comprising of one Indian and Chinese company has been tasked with the running of the platform.

SIDCOP, which is a boundary-less marketplace offers this opportunity for Chinese enterprises in order to assist them in operational optimization and adopting industry best practices in business solutions. This platform could be useful to connect with top providers from India and help Chinese enterprises source the right solution providers for their projects.

REPORT OF THE COMMITTEE ON SECTION 126 OF THE REPRESENTATION OF THE PEOPLE ACT, 1951 SUBMITTED TO THE COMMISSION

CONTEXT: The Committee constituted under the chairmanship of Sr. Deputy Election Commissioner Sh. Umesh Sinha to review and suggest modifications and changes in the provisions of the Section 126 and other sections of the Representation of the People Act 1951, provisions of Model Code of Conduct and any other ECI instruction in this regard has submitted its report to the Commission.

WHAT IS SECTION 126 REPRESENTATION OF THE PEOPLE ACT 1951?

Section 126 of the Representation of the People, 1951, prohibits displaying any election matter by means, inter alia, of television or similar apparatus, during the period of 48 hours before the hour fixed for conclusion of poll in a constituency.

WHAT IS THE ISSUE RELATED TO SECTION 126?

The task of maintaining campaign silence during last 48 hours before the conclusion of polling is becoming increasingly onerous in the light of the increasing influence of digital media. So, apart from the regulation by law and ECI instructions, the resolve, proactive support and sustained effort by all stake holders which include political parties, media, civil society organizations, academia and educational institutions, the youth and citizens at large, will remain necessary to contain the evil impact

THE COMMITTEE HAD THE FOLLOWING SCOPE OF WORK:

The Committee had detailed consultations with all major stakeholders including various political parties, nominees/ representatives of the Press Council of India (PCI), the News Broadcasters Association (NBA), the Internet and Mobile Association of India (IAMAI), the Ministry of Information and Broadcasting, the Ministry of Electronics and Information Technology (MeitY) as well as representatives of several intermediaries and technology companies including Facebook, WhatsApp, YouTube, Twitter, and Google. The Committee also had several rounds of discussions and consultations with the legal and other divisions within the ECI.