Types of Bonds is an important topic with regard to Banking Awareness and the General Awareness part of the various Government exams conducted in the country.

Candidates must know questions related to the financial terms are mostly asked in the Current Affairs, General Awareness or the Banking Awareness section of all major Government exams, especially Bank and Insurance exams.

It is important to have a wide and clear idea of the financial Institutions and financial terms if you are willing to appear for any such competitive exam.

To know the detailed syllabus of Banking Awareness, aspirants can visit the linked article and start their preparation accordingly.

Through this article, aspirants will understand what is a bond, what are Government bonds, the different types of bonds and their characteristic features. Questions based on this topic may be generic or may be picked up from any current events in the financial market.

Candidates may also find a few sample questions based on Bonds and its types. This will enable candidates to understand the types of questions which may be asked from this topic.

Given below are a few related links for the reference of candidates:

Before learning about the different types of Bonds. It is important that a candidate knows what are Bonds. So starting with the basics of a bond, let us first answer a few basic questions based on bonds.

By Definition, “A Bond is a fixed income instrument that represents a loan made by an investor to a borrower.” In simpler words, bond acts as a contract between the investor and the borrower. Mostly companies and government issue bonds and investors buy those bonds as a savings and security option.

These bonds have a maturity date and when once that is attained, the issuing company needs to pay back the amount to the investor along with a part of the profit. This kind of dealing with bonds between the issuer and the investor is done by brokers. 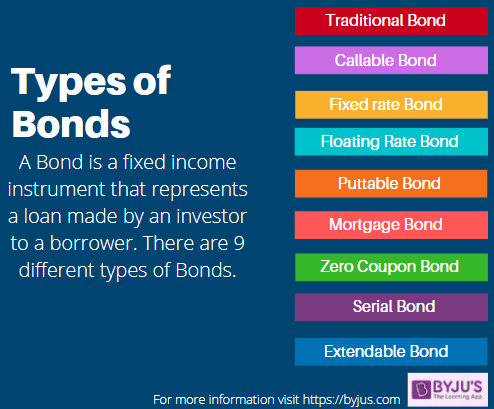 A bond issued by the Government of a country at a fixed rate of interest is called Government Bonds. These kinds of bonds are considered to be low-risk investments. Examples of Government bonds include Treasury Bills, Municipal Bonds, Zero-coupon Bonds, etc.

Aspirants must also know about the Indian Financial System and its components. To study about the same, visit the linked article.

Important Features of a Bond for Investor

When an Investor is buying bonds, there are a few things which may be given consideration before investing in them. Given below are such important points to remember while investing in any bond:

The above-mentioned things are among a few which an investor must read through while buying a bond.

The links to the detailed syllabus for the various government exams are given below:

There are various types of Bonds. A few of them have been discussed below in brief.

Some Points To Remember About Bonds

A few things to remember about the various bond types have been given below. Refer to these with respect to the upcoming government exams:

Once a candidate goes through the entire description give above about Bonds, it types and its characteristics candidates shall be further able to answer the questions given below which may be asked with respect to the same. 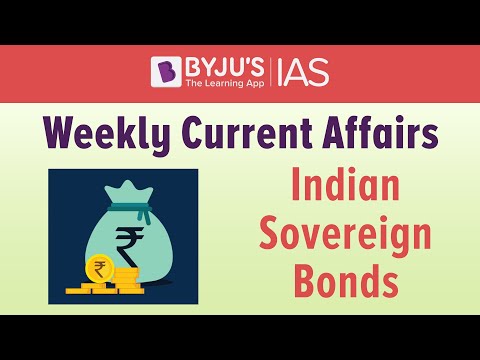 Given below a few sample questions from the topic: Bonds and Its Types, for the assistance of candidates and to help them understand the pattern in which the questions may be asked.

Q 1. What are the Bonds with the Maturity Period of 7 to 10 years are also known as?

Q 2. Which of the following bonds mean that the rate of interest for the entire duration of Bond, until it matures, remains the same?

Q 3. What is the other name for the repayment done by a Traditional Bond?

Q 4. What term is used to define the payment that an Investor gets after the maturity of the Bond?

Q.5 What is the maturity period for medium-term bonds?

More questions of the same type may be asked in the final examinations. Candidates must also stay up to date with the latest news and current affairs based on any update regarding the bond as questions from this topic may also be asked based on current events.

Candidates who intend to appear for the upcoming Government exam recruitment can get exam information along with study material, preparation tips and syllabus details at BYJU’S.