History of Banking in India

Banking in India forms the base for the economic development of the country. Major changes in the banking system and management have been seen over the years with the advancement in technology, considering the needs of people.

The History of Banking in India dates back to before India got independence in 1947 and is a key topic in terms of questions asked in various Government exams. In this article, we shall discuss in detail the evolution of the banking sector in India.

The banking sector development can be divided into three phases:

Phase II: The Nationalisation Phase which lasted from 1969 to 1991

Phase III: The Liberalisation or the Banking Sector Reforms Phase which began in 1991 and continues to flourish till date

Given below is a pictorial representation of the evolution of the Indian banking system over the years:

Candidates can get details about the functions of Banks at the linked article.

Further below in this article, we shall discuss the different phases of Bank industry evolution.

The first bank of India was the “Bank of Hindustan”, established in 1770 and located in the then Indian capital, Calcutta. However, this bank failed to work and ceased operations in 1832.

During the Pre Independence period over 600 banks had been registered in the country, but only a few managed to survive.

Following the path of Bank of Hindustan, various other banks were established in India. They were:

During the British rule in India, The East India Company had established three banks: Bank of Bengal, Bank of Bombay and Bank of Madras and called them the Presidential Banks. These three banks were later merged into one single bank in 1921, which was called the “Imperial Bank of India.”

The Imperial Bank of India was later nationalised in 1955 and was named The State Bank of India, which is currently the largest Public sector Bank.

Given below is a list of other banks which were established during the Pre-Independence period:

If we talk of the reasons as to why many major banks failed to survive during the pre-independence period, the following conclusions can be drawn:

At the time when India got independence, all the major banks of the country were led privately which was a cause of concern as the people belonging to rural areas were still dependent on money lenders for financial assistance.

With an aim to solve this problem, the then Government decided to nationalise the Banks. These banks were nationalised under the Banking Regulation Act, 1949. Whereas, the Reserve Bank of India was nationalised in 1949.

Candidates can check the list of Banking sector reforms and Acts at the linked article.

Following it was the formation of State Bank of India in 1955 and the other 14 banks were nationalised between the time duration of 1969 to 1991. These were the banks whose national deposits were more than 50 crores.

Given below is the list of these 14 Banks nationalised in 1969:

In the year 1980, another 6 banks were nationalised, taking the number to 20 banks. These banks included:

Apart from the above mentioned 20 banks, there were seven subsidiaries of SBI which were nationalised in 1959:

Note: The Regional Rural Banks in India were established in the year 1975 for the development of rural areas in India. Candidates can get the list of RRBs in India at the linked article. 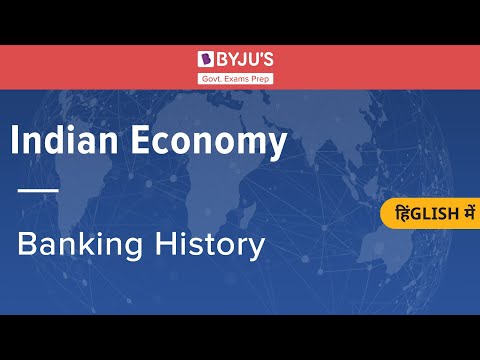 There were various reasons why the Government chose to nationalise the banks. Given below is the impact of Nationalising Banks in India:

Refer to the Government exam preparation links below:

Once the banks were established in the country, regular monitoring and regulations need to be followed to continue the profits provided by the banking sector. The last phase or the ongoing phase of the banking sector development plays a hugely significant role.

To provide stability and profitability to the Nationalised Public sector Banks, the Government decided to set up a committee under the leadership of Shri. M Narasimham to manage the various reforms in the Indian banking industry.

The other measures taken include:

Thus, the history of banking in India shows that with time and the needs of people, major developments have been brought about in the banking sector with an aim to prosper it.

The entire period of evolution of the banking industry is ongoing, and each day new changes can be seen in the banking sector for the betterment of the economic growth of the country.

Candidates who are willing to apply for the upcoming Government exams must ensure that they have proper notes and sufficient study material to prepare for the exam. For any other assistance, they can turn to BYJU’S.