Electrostatics is a branch of physics that deals with static electricity. The study of electrostatics requires the concept of electric charge. Electric charge is the inherent property of certain fundamental particles because of which particles experience a force when it is placed in an electromagnetic field. It is a scalar quantity as the charge has only magnitude and no direction. The charges can be either positive or negative. It is represented by the symbol e

2) Charge is a scalar quantity.

3) Charge will not exist without mass, while mass can exist without charge. Particles with zero rest mass like the photons or neutrino will not have any charge.

6) Electric charges only appear in discrete amounts, it is said to be quantized.

7) Charge is conserved. For an isolated charge, the total charge will remain constant, the charge is neither created nor destroyed, it is transferred from one body to another.

8) Charge is invariant. This means that the charge will not change on the body with speed.

10) The SI unit for charge is Coulomb.

11) A body can be charged by friction, induction or radiation.

Consider two point charges q1 and q2 at rest. Let d be the separation between them. According to Coulomb’s law, the force between the two charges is

Where k is the positive constant of proportionality. The value of k depends on the medium in which the charges are situated and the system of units.

If the two charges are placed in a vacuum, then the value of k is given as

ε0 is the permittivity of the free space.

Therefore, the Coulomb force acting between two point charges placed in the vacuum is

If the two charges are placed in the material medium, then

ε is the absolute permittivity of the medium.

Therefore, the Coulomb force acting between two point charges placed in the medium with the absolute permittivity ε is

The direction of the force acting between two charges depends on their nature and it is along the line joining the centre of two charges. 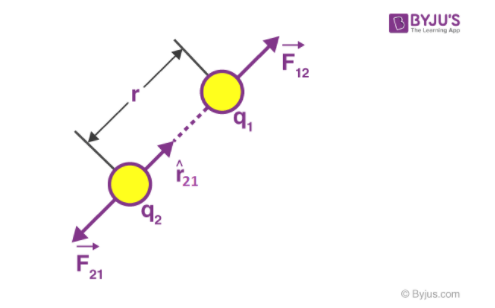 Two charged bodies will experience both electrostatic force and the gravitational force on account of their masses.

The space surrounding a charge or a system of charges in which the other charged particles experience electrical forces is called the electrostatic field or electric field.

A system consisting of two equal and opposite point charges separated by a small distance is called an electric dipole.

The dipole moment is the product of one of the charges and the vector distance from the negative to positive charge.

Dipole in an External Uniform Field If the dipole is oriented at an angle θ to a uniform electric field as shown in the figure, the charges experience equal and opposite forces. So there is no net force on the dipole. However, there is a net torque on the dipole.

The magnitude of the torque is τ =pEsin θ

An electric field line is an imaginary path along which a unit positive charge which is free to move travels.

The Gauss theorem states that for any charge distribution, the total electric flux linked with a closed surface is 1/ε0 times the total charge enclosed by the surface.

The electric flux through a surface is defined as the number of lines of force passing normally through the surface. The flux per unit area of the surface at any point in an electric field is the measure of the electric intensity at that point.

dV/dx is the rate of change of potential with distance.

The electrostatic potential energy of a system of a point charge is defined as the total amount of work done in bringing the individual charges from their state of rest at infinity to constitute the system.

A capacitor is an electrical device for storing a large quantity of charge and hence electrical energy. A capacitor in the simplest form consists of two parallel conductors of any arbitrary shape separated by a dielectric medium in between

Capacitance of the Capacitor

The capacitance of the capacitor is defined as the ratio of the magnitude of the charge on either conductor to the potential difference between the conductors forming the capacitor.

The capacitance of the capacitor depends on the

The SI unit of capacitance is Farad

Dielectrics are insulators. They do not have any free electrons and hence will not conduct any electricity. However, they greatly affect the electric field in which they are placed. The molecules of the dielectric are of two types: polar molecules and nonpolar molecules. Some of the examples of dielectrics are vacuum, mica, air, paper etc.

Capacitance of a Spherical Capacitor

If the medium between the two conductors is of relative permittivity εr, then

From the above expression, it can be understood that the capacitance of the capacitor may be increased by

Capacitance of a Parallel Plate Capacitor The parallel plate capacitor is the simplest and commonly used type of capacitor. It consists of two large identical plane parallel conductors of area A separated by a distance d.

The capacitance of a parallel plate air capacitor is

Capacitance of a Cylindrical Capacitor Energy Stored in a Charged Capacitor

The amount of work done in charging the capacitor is stored as electrostatic potential energy U in the capacitor. Therefore, the energy stored in a capacitor charged to an extent Q is

Force Between Plates Of Capacitor

The two parallel plates of the capacitor will attract each other because they are oppositely charged.

The equivalent capacitance of a number of capacitors in parallel is equal to the sum of their individual capacitances.

(2) A charge Q is divided into two parts q and Q – q. What is the value of q for the maximum force between them?

Adding and subtracting (Q/2)2 and rearranging

F≤ (KQ2/4R2) and the maximum value occurs when the second term is zero.

are mounted on insulating stands and charged. Then which one is best suited to retain the charges for a longer time?

In a spherical metal conductor, the charges are uniformly distributed over the entire surface Therefore, it retains the charges for a longer period of time. In the case of non-spherical shapes, the concentration of charge will be different in different points due to which the charges will not stay long on the surface.

(4) If a conducting medium is placed between two charges, then the electric force between them will become

(1) A capacitor of capacitance value 1 µF is charged to 30 V and the battery is then disconnected. If the remaining circuit is connected across a 2µF capacitor. the energy lost by the system is

(2) A battery is used to charge a parallel plate capacitor till the potential difference between the plates becomes equal to the electromotive force of the battery. The ratio of the energy stored in the capacitor and the work done by the battery will be

(3) A parallel plate air capacitor is connected to a battery. The quantities charge, voltage, electric field and energy associated with this capacitor are given by Q0, V0, E0 and U0 respectively. A dielectric slab is now introduced to fill the space between the plates with the battery still in connection. The corresponding quantities are now given by Q, V, E and U are related to the previous one as

(4) Potential and field strength at a certain distance from a point charge is 600 V and 200 NC -1. The distance of the point from the charge is

(5) The electric charges are distributed in a small volume. The flux of the electric field through a spherical surface of radius 10 cm surrounding the total charge is 20 Vm. The flux over a concentric sphere of radius 20 cm will be

What is the dielectric breakdown?

The phenomenon by which a dielectric will lose its insulating properties and starts behaving like a conductor is called the dielectric breakdown.

The total flux through any hypothetical surface is equal to (1/ε0) times the net charge enclosed by the surface.