Gravitation or just gravity is the force of attraction between any two bodies. All the objects in the universe attract each other with a certain amount of force, but in most of the cases, the force is too weak to be observed due to the very large distance of separation. Besides, gravity’s range is infinite, but the effect becomes weaker as objects move away.

This force of attraction was first observed by Sir Isaac Newton and was presented as Newton’s law of gravitation in the year 1680. However, gravitation can generally exist in two main instances.

1. Gravitation may be the attraction of objects by the earth

If a body (ball) is thrown upwards, it reaches a certain height and falls downwards because of the gravity of the earth.

2. Gravitation may be the attraction of objects in outer space.

Force of attraction between the other planets and the sun.

Each body in this universe attracts other bodies towards itself with a force known as Gravitational Force. Thus, gravitation is a study of the interaction between two masses. Out of the two masses, the heavier one is called source mass, and the lighter one is called test mass.

Gravitational force is a central force which depends only on the position of the test mass from the source mass and always acts along the line joining the centres of the two masses.

The core problem of gravitation has always been in understanding the interaction between the two masses and their relativistic effects.

Ptolemy has proposed the geocentric model, which failed in understanding planetary motions, led to the development of the heliocentric model by Nicholas Copernicus, whose idea is based on the rotation of a test mass around the source mass in circular orbits, although the model correctly predicts the position of planets and their motions but has failed in explaining many aspects like the occurrence of seasons which led the construction of a model based on Kepler’s laws of planetary motion.

According to Newton’s law of gravitation, “Every particle in the universe attracts every other particle with a force whose magnitude is,

As f(r) varies inversely as a square of ‘r’ it is also known as inverse square law force. The proportionality constant (G) in the above equation is known as the gravitational constant.

The dimension formula of G is [M-1L3T-2]. Also, the value of the gravitational constant,

The vector form of Newton’s law of gravitation signifies that the gravitational forces acting between the two particles form action-reaction pair. 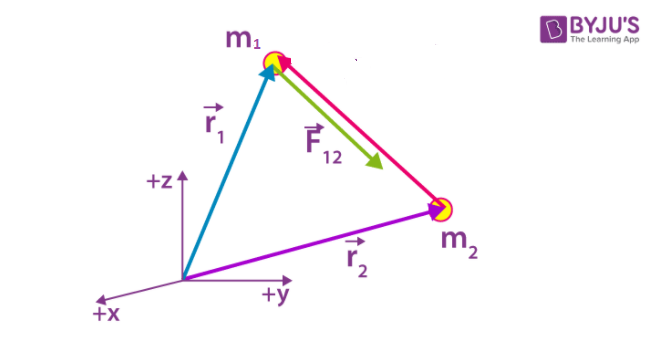 From the above figure, it can be seen that the two particles of masses and are placed at a distance.

The direction of the vector is from M1 to M2

Therefore, the force applied on M2 by M1 is

The negative sign indicates the attractive nature of the force.

Similarly, force on M1 and M2

Hence, the applied forces are equal and opposite. Hence the gravitational force follows Newton’s third law.

Mathematically it can be represented as,

Principle of Superposition of Gravitational Forces

Newton’s law of gravitation answers only the interaction between two particles if the system contains ‘n’ particles there are n(n – 1)/2 such interactions.

“The resultant gravitational force F acting on a particle due to the number of point masses is equal to the vector sum of forces exerted by the individual masses on the given particle”.

Derivation of Newton’s law of Gravitation from Kepler’s law

Suppose a test mass is revolving around a source mass in a nearly circular orbit of radius ‘r’, with a constant angular speed (ω). The centripetal force acting on the test mass for its circular motion is,

Using this in force equation we get,

⇒ F = GMm/r2, which is the equation of Newton’s law of gravitation.

1. What is the force of gravity acting on an object of mass 2000 kg at the Earth’s surface?

acceleration due to gravity

What is Gravitation? – Video Lesson 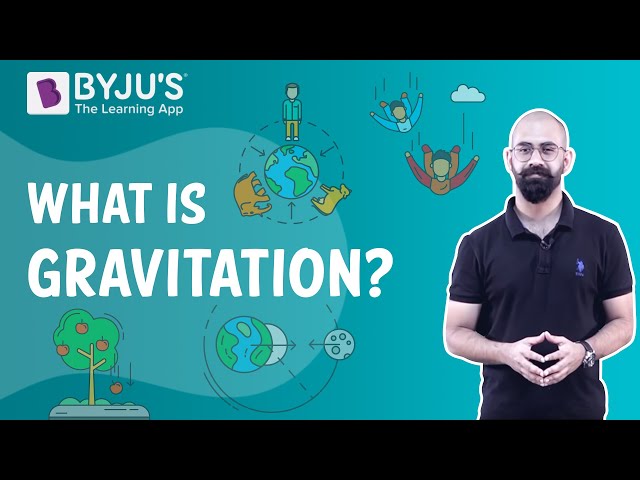 Will your weight be constant when you are travelling to Greenland from Brazil?

Can you screen the effect of gravitation by any material medium?

No. gravitational effect cannot be screened, unlike electrostatic force. Because the gravitational force does not depend on any medium.

Why are space rockets launched eastward?

Earth spins (rotates) from west to east in 24 hours. If the space rockets are launched in the same direction, the relative velocity of the rocket increases which helps it to rise without much fuel.

Why does a bouncing ball bounce higher on hills than on planes?

As the altitude increases, the acceleration due to gravity decreases. Therefore the ball bounces higher in hills than on planes.

The gravitational potential energy is negative. Why?

Why is Newton’s law of gravitation called universal law?

Newton’s law of gravitation holds good irrespective of the nature of the interacting bodies at all places and at all times.

What is the weight of the body at the centre of the Earth?

Does friction arise due to gravitation?

Friction does not arise due to gravitation. Its origin is electrical in nature.

Test your Knowledge on gravitation
Q5