Gravitation, also known as gravity, is a force that exists among all material objects in the universe. Gravity acts on objects of all sizes ranging from subatomic particles to cluster of galaxies. Sir Issac Newton studied its behaviour with his famous law of gravitation. In physics, gravitation is defined as the force that attracts every object to the centre of gravity. In general, gravitation is the force exerted by the body due to the virtue of its mass.

The Universal Law of Gravitation states:

In this article, let us learn more about the universal law of gravitation.

Henry Cavendish, with careful experiments, found the value of Gravitational Constant to be 6.67 x 10−11 m3⋅kg−1⋅s−2N. The value of ‘G’ remains constant throughout the universe.

Weight and the Gravitational Force

In the law of gravity, we noticed that the mass is a crucial quantity. We consider mass and weight to be the same, but in reality, they are related but are different. Weight is the gravitational force exerted on an object of a certain mass. The weight of an object can be obtained by multiplying the mass m of the object by the acceleration due to gravity, g, at the surface of the Earth. The measured gravitational acceleration at the Earth’s surface is found to be about 980 cm/second/second.

Question:Calculate the gravitational force of attraction between the Earth and a 70kg man if he is standing at a sea level, a distance of 6.38 x 106 m from the earth’s center

Now substituting the values in the Gravitational force formula, we get

Questions To Ponder Upon

The forces of speed and gravity are what keeps the moon in constant orbit around the earth. The Moon seems to hover around in the sky, unaffected by gravity. However, the reason the Moon stays in orbit is precise because of gravity. In this video, clearly, understand why the moon doesn’t fall into the earth 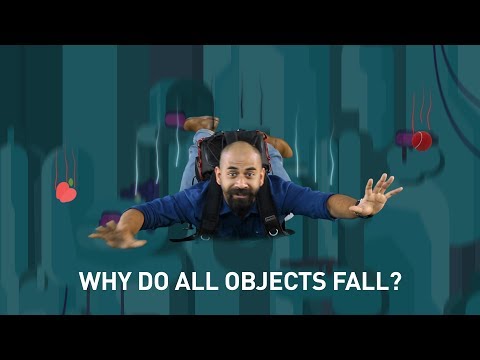 Gravity isn’t the same everywhere on earth. Gravity is slightly stronger over the places with more underground mass than places with less mass. NASA uses two spacecraft to measure the variation in the Earth’s gravity. These spacecraft are a part of Gravity Recovery and Climate Experiment (GRACE) mission. Areas in blue have weaker gravity while areas in red have slightly stronger gravity.

Stay tuned to Byju’s to know more about gravitation and much more.