In recent days, we often hear about energy. Every invention, civilization is based upon acquiring and effectively using energy. This is possible by the unique property of our Universe, that it can transfer and transform
energy, but the total amount is always the same (conserved).

One fundamental focus of physics is to investigate energy. Energy in Physics can be generally defined as a scalar quantity associated with the state or condition of one or more objects.

As per the International System of Units (SI), the unit of energy is said to be Joule (J). In addition to this, energy is also expressed in many other units which do not belong to the SI system. Some of these units include calories, ergs,  kilowatt-hours, kilocalories and British Thermal Units. However, these will need a conversion factor if we want to express them in SI units. All of these are used in certain areas of commerce and science.

In this chapter, we will mainly focus on two forms of mechanical energy: Kinetic and Potential energy.

It is associated with the state of motion of an object. The greater the kinetic energy, the faster it moves. For an object of mass m and velocity v, it is given by the expression,

It is associated with the configuration (arrangement) of the system of objects that exert forces on one another. 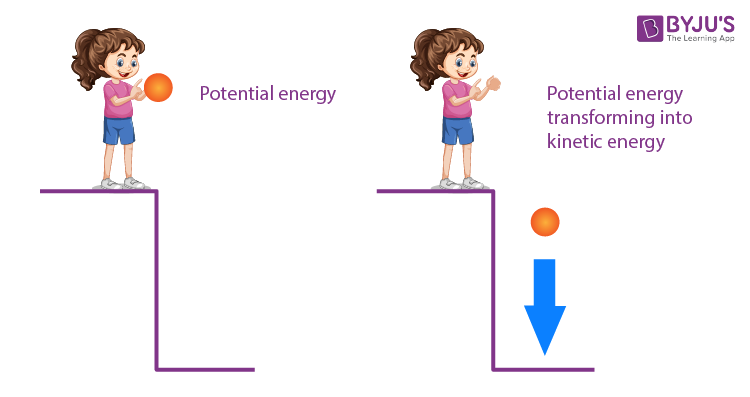 When you throw a ball down from a height h above the surface of the earth, the increase in kinetic energy of the ball is accounted for by defining gravitational potential energy. This energy is associated with the state of separation (configuration) between two objects (ball and earth) attracted by gravitational force.

Where F is the constant force and

More generally, if the force is a conservative force, then the change in potential energy is given by,

Conservative force from potential energy can be found by,

The object is said to be in equilibrium if the net force acting on is equal to zero.

Neutral equilibrium: We can move the particle slightly away from such a point and it will still remain in equilibrium (i.e., it will neither attempt to return to its initial state nor will it continue to move) 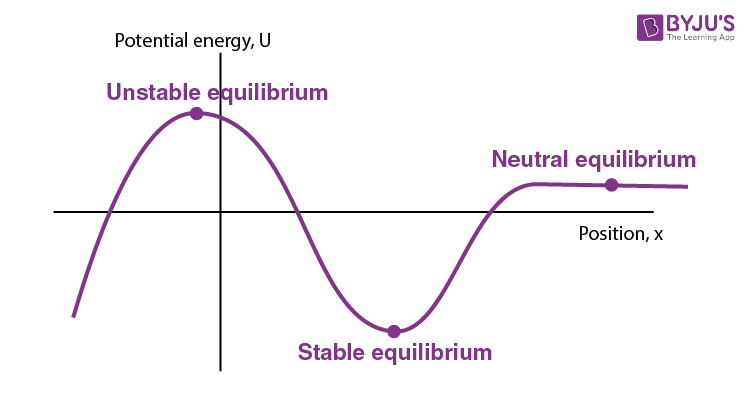 The potential energy of a conservative system is given by U = ax2– bx where a and b are positive constants.

In a conservation field

From the given equation we can see that

The work done by the gravitational force for displacing the object from height 0 to h is given by,

Let’s consider a spring-mass system with a spring of spring constant k and a block of mass, m displaced through a distance x from its equilibrium position (x=0). As the block moves from x=0 to x, the spring force, Fs=-kx does work on the block. The corresponding change in elastic potential energy is given by,

A block of mass m is attached to two unstretched springs of constant k₁ and k₂ as shown in the figure. The block is displaced towards the right through a distance of x and released. Find the speed of the block as it passes through a distance x/4 from its mean position.

This theorem states that work done by all the forces acting on a particle or body is equal to the change in its kinetic energy.

Let us take an example in which a block of mass m kept on a rough horizontal surface is acted upon by a constant force F parallel to the surface and it is displaced through x. The initial velocity and the final velocity are respectively, v0 and v.

Finally, the work done is

We now define the Kinetic energy(K) of the object:

By this definition, the work done on the object is simply equal to the change in the object’s

1. The displacement of a body in a meter is a function of time according to x = 2t4+5. The mass of the body is 2kg. What is the increase in its kinetic energy one second after the start of motion?

2. A 2kg block is placed on a frictionless horizontal surface. A force shown in the F – x graph is applied to the block horizontally. The change in kinetic energy is

If only conservative forces act on a system, then total mechanical energy of the system remains constant. i.e.

Consider the case of a simple pendulum of massive bob hanging at the end of a massless rod that is pivoted at a fixed point. If the pendulum is given a velocity from its equilibrium position, it executes a simple harmonic motion where energy is conserved at all points.

As the bob is raised from the equilibrium point, its position above the surface of the earth is increased and hence the potential energy is increased. It is accounted for the decrease in kinetic energy as the bob slows down while raising.

By conservation of mechanical energy,

2. An ideal massless spring ‘S’ can be compressed 1.0m by a 100N force. It is placed as shown at the bottom of a frictionless inclined plane which makes an angle of θ = 300 with the horizontal. A 10 kg block is released from the top of the incline and is brought to rest momentarily after compressing the spring 2.0m. Through what distance does the mass slide before coming to rest?

The mass describes a distance x before reaching the spring. Then the total distance described is (x + 2) before coming to rest.

x = 2 along the inclined surface

What is the unit of energy?

Joule is the unit of energy.

What are the two basic categories of energy?

What is the work-energy theorem, exactly?

According to the work-energy theorem, the net work done on an object by force equals its kinetic energy change.

Test your Knowledge on energy
Q5