The hybridization of SF6 is sp3d2 type. Just to describe the compound in brief, Sulphur Hexafluoride is a type of greenhouse gas which is colourless, odourless, non-toxic and non-flammable. It is also an inorganic and a non-polar gas. Normally, SF6 can be prepared by exposing or combining S8 with F2. Now we will look at how the hybridization takes place.

What is the Hybridization of Sulphur Hexafluoride?

To determine the hybridization of sulphur hexafluoride we will look at the orbitals involved and the bonds that are formed during the combination of sulphur and fluorine molecules. The orbitals involved are 3s, 3py, 3py, 3pz and 3dx2–y2 and 3dz2. During the formation of SF6, the sulphur atom which is the central atom in its ground state will have 3s23p4 configuration. In the excited state, the electron pairs in 3s and 3px orbitals get unpaired and one out of each pair is promoted to vacant 3dz2 and 3dx2-y2 orbitals. Now all these six orbitals (one 3s, three 3p and two 3d) which are half-filled get hybridized resulting in the formation of six sp3d2 hybrid orbitals. Further, the sp3d2 hybrid orbitals overlap with a 2p orbital of fluorine, and they form the S-F bond. 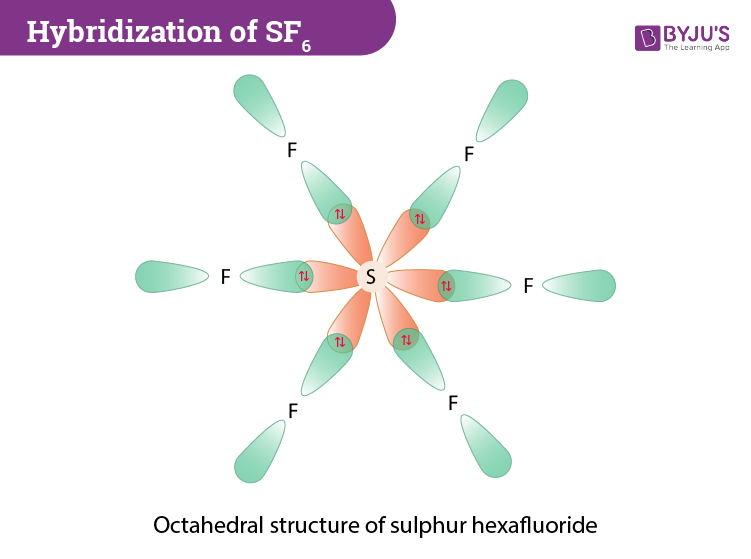 SF6 molecular geometry will be octahedral because if we look at the structure sulphur hexafluoride has a central sulphur atom around which12 electrons or 6 electron pairs are present and there are no lone pairs. The F-S-F bonds are slated to be at 90 degrees.

Test Your Knowledge On Hybridization Of Sf6!
Q5