Here we will learn how to determine the hybridization of I3-. One key thing that students have to remember is that I3− is a linear anion. It is formed by the bonding of I2 with I− ion. Here I− ion will be the donor and I2 molecule will be the acceptor where electrons are usually accommodated in the empty d orbitals. I3- ion is basically sp3d hybridized.

What is the Hybridization of Triiodide ion?

If we look at the iodine atoms there are seven valence electrons in its outer shell and two monovalent atoms are also present. Further, during the combination of Iodine with the two other Iodine atoms, the central atom gains a negative charge whose value will be taken as 1.

If we place or substitute the values according to the formula, we get

I3- Molecular Geometry And Bond Angles 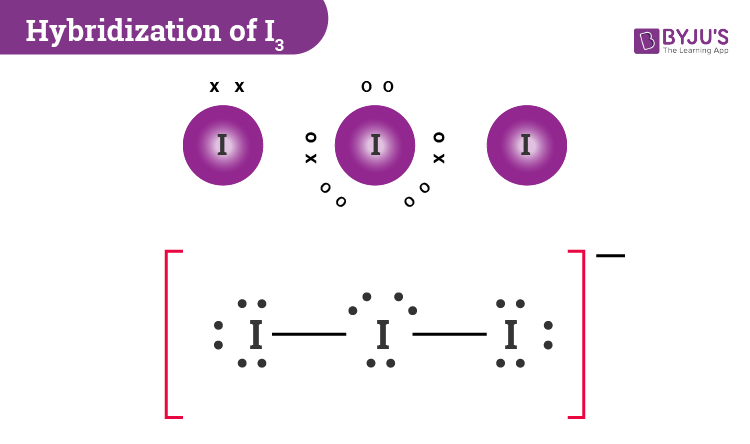 I3- molecular geometry is linear. While there are three Iodine atoms, one of the atoms has a negative charge which further gives 3 lone pairs of electrons and 2 bond pairs. Its steric number will be 5. The three lone pairs will repel each other and take up equatorial positions. The remaining two Iodine atoms are at 180o from each other.