To know about the hybridization of C2H4 (ethene or ethylene) students have to recognize or understand the number of bond and the orbitals present in the molecule. This will help in determining the hybridization type and other details. C2H4 is sp2 hybridized.

What is the Hybridization of Ethene?

Let us look at how the hybridization of ethene (ethylene) occurs. When we look at the molecules of C2H4 it has 2 CH molecules and 4 H molecules. The carbon atom consists of 6 electrons and hydrogen has 1 electron.

During the formation of CH2=CH2, the electronic configuration of carbon in its ground state (1s2 2s2 2p1 2p1) will change to an excited state and change to 1s2 2s1 2px12py1 2pz1. In the excited state, since carbon needs electrons to form bonds one of the electrons from 2s2 orbital will be shifted to the empty 2pz orbital to give 4 unpaired electrons. 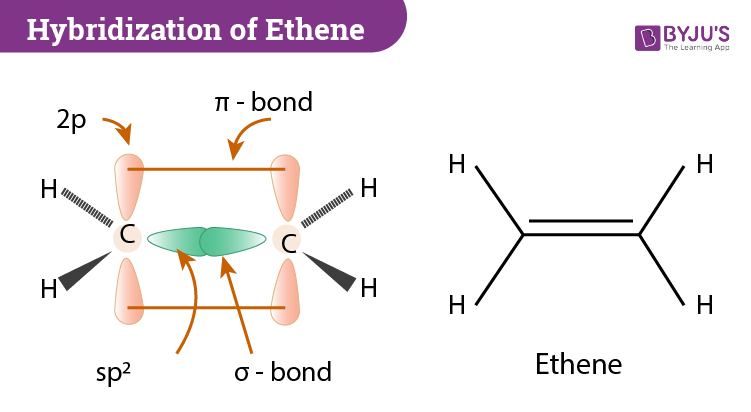 Meanwhile, out of 2s, 2px, 2py, and 2pz orbitals in carbon, only 2px, 2py, and 2s take part in hybridization. One 2pz orbital remains unchanged. This leads to the formation of three sp2 hybridized orbitals. The hybrid orbitals look like sp3 orbitals, but they are sp2 orbitals as they are fatter and shorter.

The molecular orbitals after hybridization now form different bonds between the electrons. One carbon atom overlaps the sp2 orbital of another carbon atom to form sp2 – sp2 sigma bond. The two sp2 hybrid orbitals get overlapped by two hydrogen atoms containing unpaired electrons. A pi bond is formed by the unhybridized 2pz orbitals of each carbon atom.

C2H4 molecular geometry is said to be planar in structure while the sp2 orbitals are placed at a bond angle of 120o.