The hybridization that is involved in SF4 is sp3d type. Here will learn and understand how to determine SF4 hybridization. We will discuss the steps in detail.

What is the Hybridization of Sulphur Tetrafluoride?

In order to determine the hybridization of sulphur tetrafluoride, you have to first understand its Lewis structure and the number of valence electrons that are present. The SF4 molecule consists of a total of 34 valence electrons. Here 6 will come from sulphur and each of the four fluorine atoms will have 7 electrons. 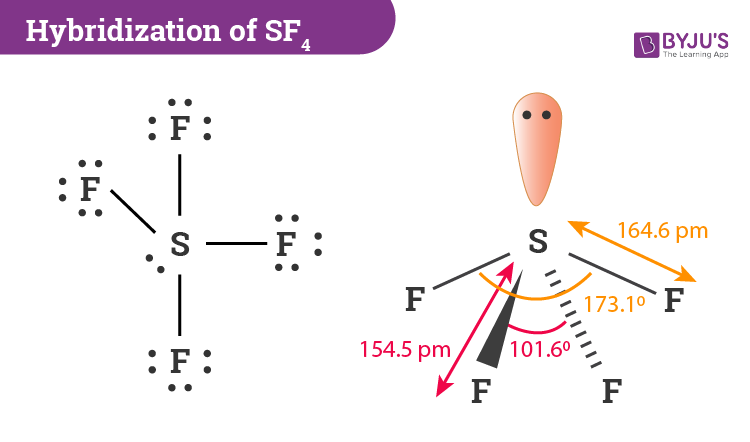 During the formation of SF4, the sulphur atom will form bonds with each of fluorine atoms where 8 of valence electrons are used. Meanwhile, the four fluorine atoms will have 3 lone pairs of electrons in its octet which will further utilize 24 valence electrons. In addition, two electrons will be kept as lone pair in the sulphur atom. Now we can determine sulphur’s hybridization by taking a count of the number of regions of electron density. When bonding takes place there is a formation of 4 single bonds in sulphur and it has 1 lone pair. Looking at this, we can say that the number of regions of electron density is 5.

The middle S atom containing the 5 valence atomic orbitals is basically hybridized to form five sp3d hybrid orbitals. In 2P-orbitals, four hybrid orbitals are overlapped and the fifth one contains a lone pair. Knowing the steric number will also help in determining the count of hybrid orbitals used by the atom. Sulphur will use five orbitals including one 3s-orbital, three 3p-orbitals and one 3d-orbital.

Test Your Knowledge On Hybridization Of Sf4!
Q5