The hybridization of benzene is said to be sp2 type. Benzene consists of 6 carbon and 6 hydrogen atoms where the central atom usually is hybridized. Here, carbon is the central atom.

Students will understand all the mechanisms involved in the occurrence of hybridization in this lesson. We will look at the details below.

What is the Hybridization of Benzene?

Before we talk about the hybridization of C6H6 let us first understand the structure of benzene. This chemical compound is made from several carbon and hydrogen atoms. However, to form benzene, the carbon atoms will need one hydrogen and two carbons to form bonds. Further, the carbon atom lacks the required number of unpaired electrons to form the bonds. At this stage its electronic configuration will be 1s2, 2s2, 2px1, 2py1. What happens next is the promotion of one 2s2 electron pair to the empty 2pz orbital. 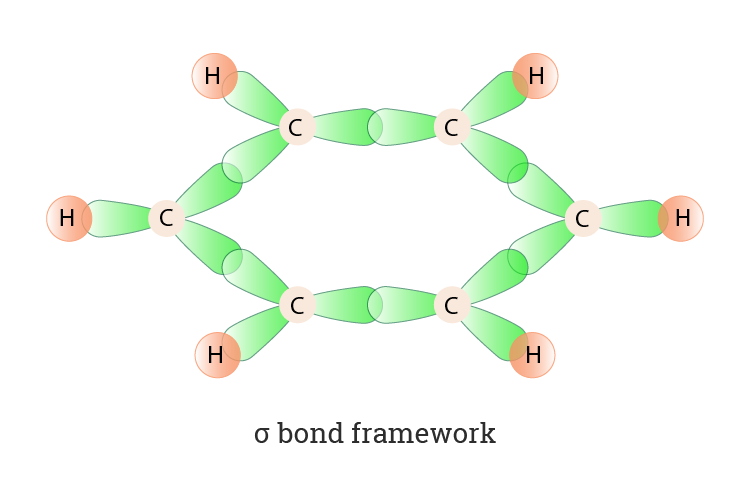 During this, the carbon atom will enter into an excited state and the electron configuration will also change to become 1s2, 2s1, 2px1, 2py1, 2pz1. Now when the electron is promoted from the 2s to the empty 2p orbital, we will get 4 unpaired electrons. These electrons will be used in the formation of the bonds. For, hybridisation to occur the outer orbitals are used. Three of the carbon orbitals are used rather than all four. In this, 1 s orbital and two p orbitals are hybridized and form three sp2 hybridized orbitals. Each of the carbon atoms will form sigma bonds with two other carbons and one hydrogen atom.