Before we get into the hybridization of BF3 lets us quickly go through and know few details about Boron trifluoride. This chemical compound is an inorganic compound which is colourless but toxic in nature when it is in the gaseous stage. It produces when reacted with moist air. In its liquid form, it is highly soluble (dihydrate) substance.

Now that we have learnt a few things when we talk about the type of hybridization for this molecule, it is sp2 hybridized. To explain it in simple terms, Boron’s atomic p orbitals and s orbitals in the outer shell usually combine to form three sp2 hybrid orbitals which are all the equivalent energy.

What is the Hybridization of Boron Trifluoride? 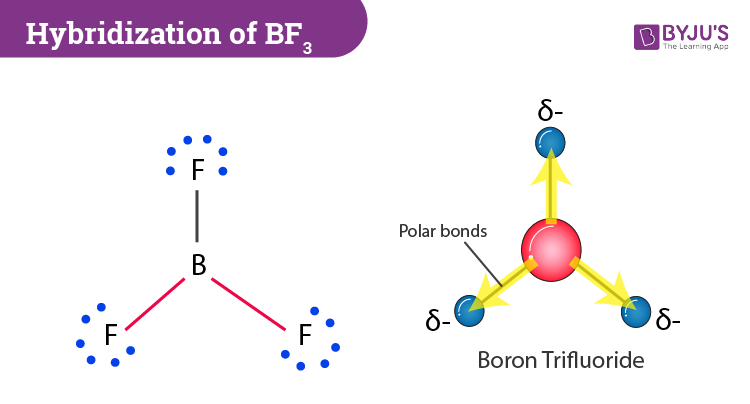 BF3 has a boron atom with three outer-shell electrons in its ground state and three fluorine atoms containing seven outer electrons. Further, if we observe closely, one boron electron is unpaired in the ground state. During the formation of this compound, the 2s orbital and two 2p orbitals hybridize. Only one of the empty p-orbital is left behind as the lone pair. In short, Boron needs 3 hybridized orbitals to make bonds with 3 atoms of F where the 2pz orbitals get overlapped with these hybridized sp2 orbitals and bonds are formed.

Normally, boron forms monomeric covalent halides which have a planar triangular geometry. This shape is mainly formed by the overlap of the orbitals between the two compounds. To be more precise, the BF3 molecular geometry is trigonal planar. It further has symmetric charge distribution on the central atom and is nonpolar.

The bond angle is 120o where all the atoms are in one plane. Each of them also makes an equilateral triangle.