What is Number System in Maths?

A number system is defined as a system of writing to express numbers. It is the mathematical notation for representing numbers of a given set by using digits or other symbols in a consistent manner. It provides a unique representation of every number and represents the arithmetic and algebraic structure of the figures. It also allows us to operate arithmetic operations like addition, subtraction and division.

Before discussing the different types of number system examples, first, let us discuss what is a number?

What is a Number?

A number is a mathematical value used for counting or measuring or labelling objects. Numbers are used to perform arithmetic calculations.  Examples of numbers are natural numbers, whole numbers, rational and irrational numbers, etc. 0 is also a number that represents a null value.

Now, let us discuss the different types of number systems with examples.

The decimal number 1457 consists of the digit 7 in the units position, 5 in the tens place, 4 in the hundreds position, and 1 in the thousands place whose value can be written as:

The base 2 number system is also known as the Binary number system wherein, only two binary digits exist, i.e., 0 and 1. Specifically, the usual base-2 is a radix of 2. The figures described under this system are known as binary numbers which are the combination of 0 and 1. For example, 110101 is a binary number.

We can convert any system into binary and vice versa. 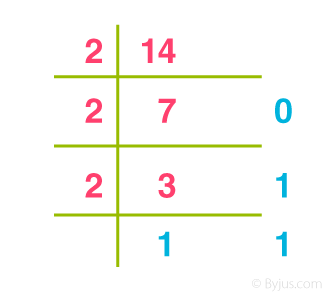 In the octal number system, the base is 8 and it uses numbers from 0 to 7 to represent numbers. Octal numbers are commonly used in computer applications. Converting an octal number to decimal is the same as decimal conversion and is explained below using an example.

In the number system chart, the base values and the digits of different number systems can be found. Below is the chart of the numeral system. 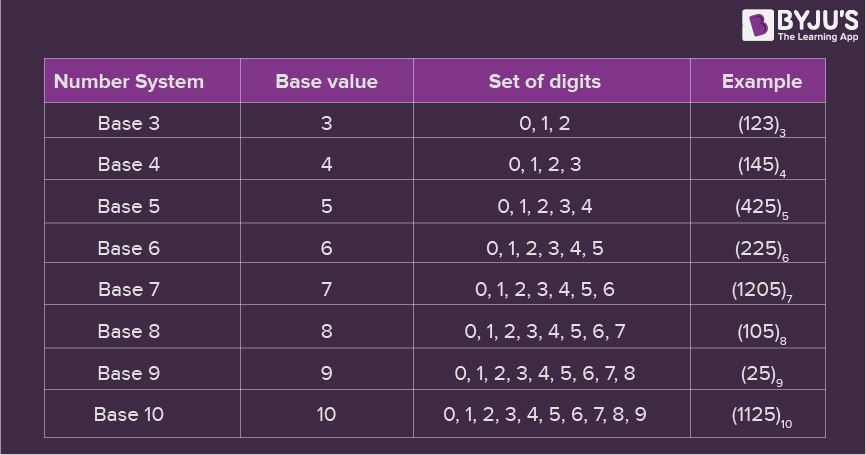 With the help of the different conversion procedures explained above, now let us discuss in brief about the conversion of one number system to the other number system by taking a random number.

The number 349 in the hexadecimal number system is 15D

Now we will convert this decimal number to the required octal number by repetitively dividing by 8.

Therefore, taking the value of the remainder from bottom to top, we get;

We can write the given binary number as:

Now as we know, in the octal number system,

Therefore, the required octal number is (25)8

We need to convert 2C16 into binary numbers first. 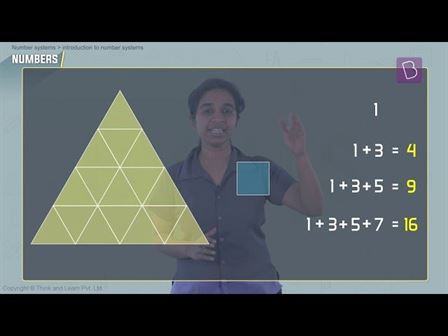 When we type any letter or word, the computer translates them into numbers since computers can understand only numbers. A computer can understand only a few symbols called digits and these symbols describe different values depending on the position they hold in the number. In general, the binary number system is used in computers. However, the octal, decimal and hexadecimal systems are also used sometimes.

What is Number System and its Types?

Why is the Number System Important?

The number system helps to represent numbers in a small symbol set. Computers, in general, use binary numbers 0 and 1 to keep the calculations simple and to keep the amount of necessary circuitry less, which results in the least amount of space, energy consumption and cost.

What is Base 1 Number System Called?

What is the equivalent binary number for the decimal number 43?

How to convert 308 into a decimal number?