Polynomial derived from the words “poly” which means “many” and the word “nomial” which means “term”. In maths, a polynomial expression consists of variables which are also known as indeterminates and coefficients. The coefficients involve the operations of subtraction, addition, non-negative integer exponents of variables and multiplication.In Mathematics, both algebraic expressions and polynomials are made up of variables and constants, including arithmetic operations.The only difference between them is that algebraic expressions contain irrational numbers in the powers.A detailed polynomials Class 9 notes are provided here along with some important questions so that students can understand the concept easily.

To prepare for class 9 exams, students will require notes to study. These notes are of great help when they have to revise chapter 2 polynomials before the exam. The note here provides a brief of the chapter so that students find it easy to have a glance at once. The key points covered in the chapter have been noted. Go through the points and solve problems based on them.
The topics and subtopics covered in class 9 polynomials chapter 2 include:

Polynomials are expressions with one or more terms with a non-zero coefficient. A polynomial can have more than one term. An algebraic expression p(x) = a0xn + a1xn-1 + a2xn-2 + … an is a polynomial where a0, a1, ………. an are real numbers and n is non-negative integer.
Examples of polynomials are:

This topic has been widely discussed in class 9 and class 10.

Polynomials in One Variable

To know more about polynomials in one variable, click here.

The zeroes of polynomials are the points, where the polynomial equal to 0 as a whole.

To know more about the zeroes of polynomials, click here.

If p(x) is any polynomial having degree greater than or equal to 1 and if it is divided by the linear polynomial x – a, then the remainder is p(a).

To know more about the Remainder Theorem, click here.

To know more about the Factor Theorem Theorem, click here.

To learn more about Algebraic Identities for class 9, Click here.

For More Information On Quadratic Polynomial, Watch The Below Video. 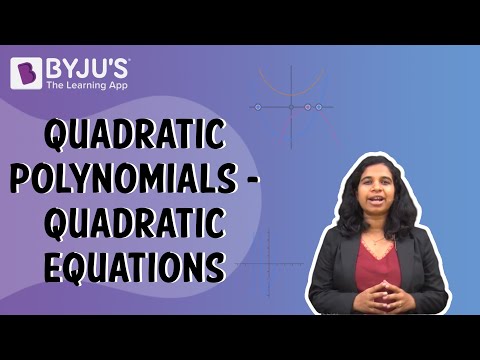 Write the coefficients of x  in each of the following:

What are the degrees of following polynomials?

Stay tuned with BYJU’S – The Learning App and get detailed notes of all concepts of Class 9 Mathematics.