Students can find the NCERT Solutions for Class 10 Geography Chapter 3 – Water Resources here. These solutions contain the answers to all exercise questions. Answers are created by subject experts and are written from an examination perspective. Referring to these solutions will help students in scoring high marks during the exam. Also, they will understand the answer writing skills through which they can express their answers in an effective way. So, go through these NCERT Solutions Class 10 and make the most of it.

Students can download the NCERT Solutions for Class 10 Geography PDF below. 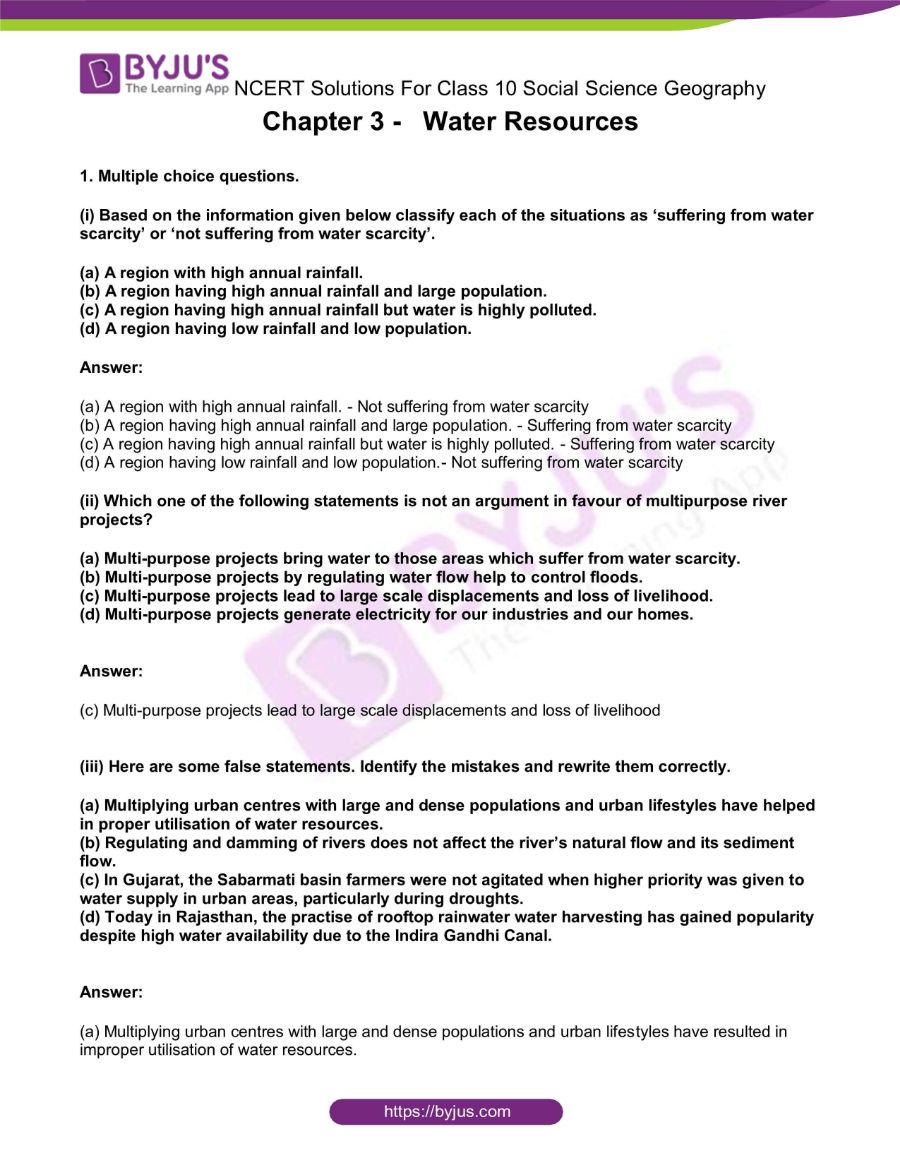 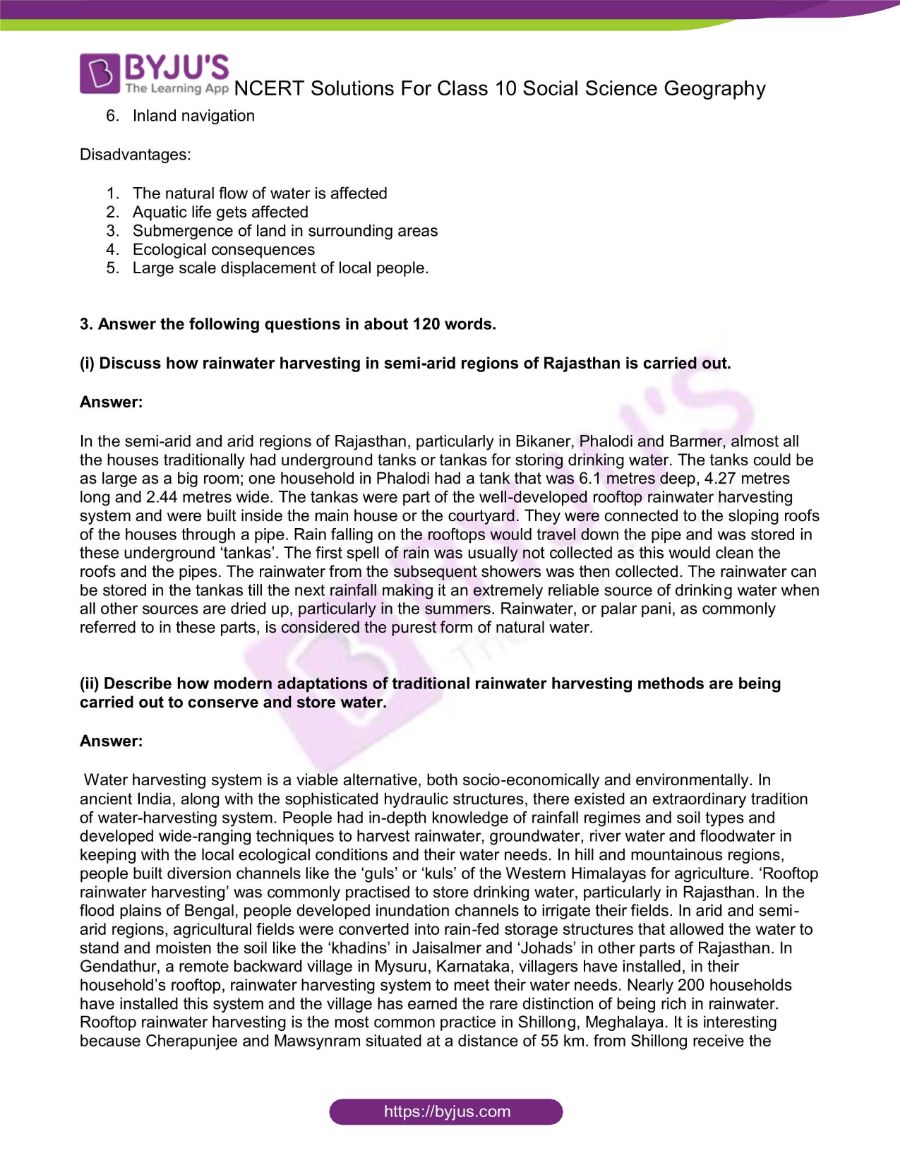 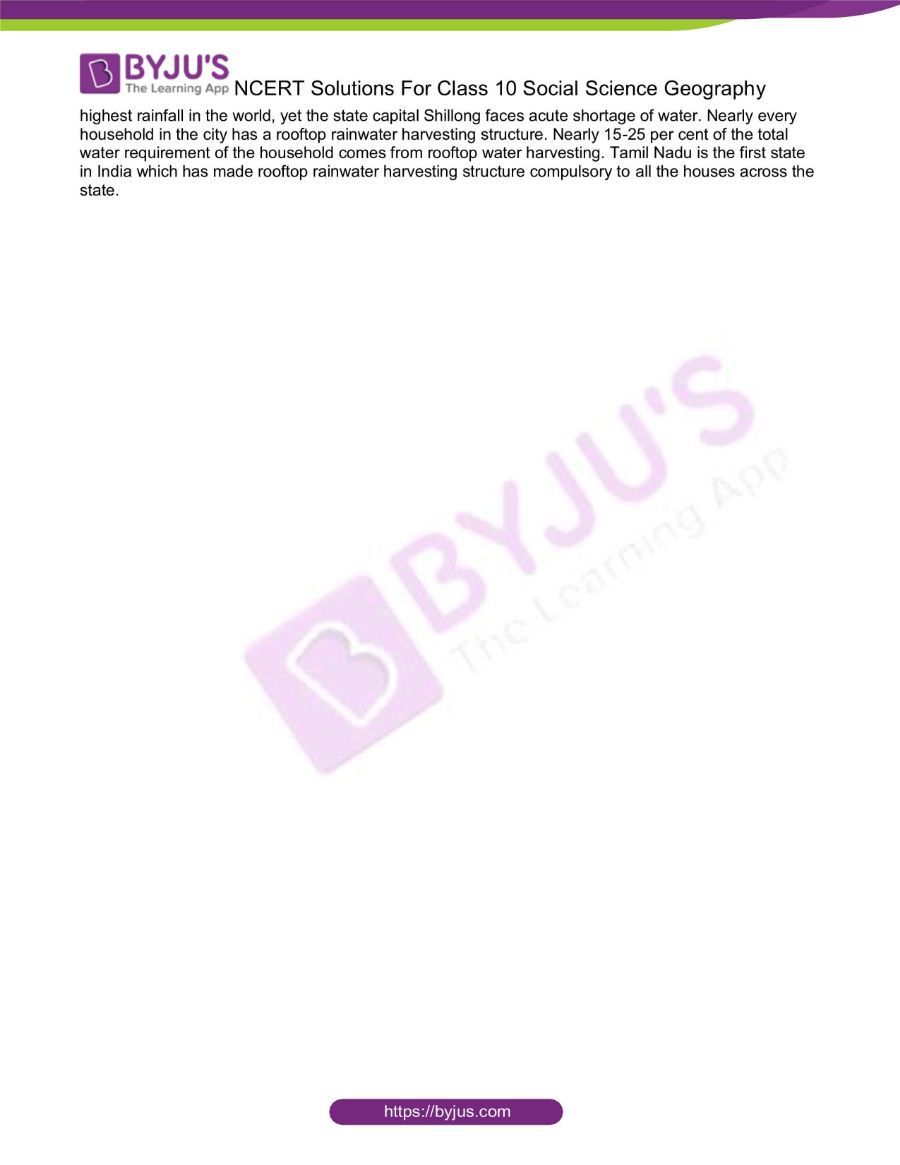 The solutions for chapter 3 of Water Resources are given below. Students should also check NCERT Solutions for Class 10 for other subjects.

(a) A region with high annual rainfall.

(b) A region having high annual rainfall and large population.

(c) A region having high annual rainfall but water is highly polluted.

(d) A region having low rainfall and low population.

(ii) Which one of the following statements is not an argument in favour of multipurpose river projects?

(a) Multi-purpose projects bring water to those areas which suffer from water scarcity.

(d) Multi-purpose projects generate electricity for our industries and our homes.

(iii) Here are some false statements. Identify the mistakes and rewrite them correctly.

(a) Multiplying urban centres with large and dense populations and urban lifestyles have helped in proper utilisation of water resources.

(b) Regulating and damming of rivers does not affect the river’s natural flow and its sediment flow.

(c) In Gujarat, the Sabarmati basin farmers were not agitated when higher priority was given to water supply in urban areas, particularly during droughts.

(d) Today in Rajasthan, the practice of rooftop rainwater water harvesting has gained popularity despite high water availability due to the Indira Gandhi Canal.

(a) Multiplying urban centres with large and dense populations and urban lifestyles have resulted in improper utilisation of water resources.

(b) Regulating and damming of rivers does affect the river’s natural flow and its sediment flow.

(c) In Gujarat, the Sabarmati basin farmers were agitated when higher priority was given to water supply in urban areas, particularly during droughts.

(d) Today in Rajasthan, the practise of rooftop rainwater water harvesting popularity has declined due to high water availability from Indira Gandhi Canal.

2. Answer the following questions in about 30 words.

(i) Explain how water becomes a renewable resource.

Water can be considered as a renewable resource since there will be rains and surface water and groundwater will get recharged continuously due to the 3 process involved in the hydrological cycle.

The 3 processes of the hydrological cycle are

(ii) What is water scarcity and what are its main causes?

Many of our cities are such examples. Thus, water scarcity may be an outcome of large and growing population and consequent greater demands for water, and unequal access to it. A large population requires more water not only for domestic use but also to produce more food. Hence, to facilitate higher food-grain production, water resources are being over-exploited to expand irrigated areas for dry-season agriculture. Irrigated agriculture is the largest consumer of water. Most farmers have their own wells and tube-wells in their farms for irrigation to increase their productivity. This has adversely affected water availability and food security of the people.

(iii) Compare the advantages and disadvantages of multi-purpose river projects.

3. Answer the following questions in about 120 words.

(i) Discuss how rainwater harvesting in semi-arid regions of Rajasthan is carried out.

In the semi-arid and arid regions of Rajasthan, particularly in Bikaner, Phalodi and Barmer, almost all the houses traditionally had underground tanks or tankas for storing drinking water. The tanks could be as large as a big room; one household in Phalodi had a tank that was 6.1 metres deep, 4.27 metres long and 2.44 metres wide. The tankas were part of the well-developed rooftop rainwater harvesting system and were built inside the main house or the courtyard. They were connected to the sloping roofs of the houses through a pipe. Rain falling on the rooftops would travel down the pipe and be stored in these underground ‘tankas’. The first spell of rain was usually not collected as this would clean the roofs and the pipes. The rainwater from the subsequent showers was then collected. The rainwater can be stored in the tankas till the next rainfall making it an extremely reliable source of drinking water when all other sources are dried up, particularly in the summers. Rainwater, or ‘palar pani’, as commonly referred to in these parts, is considered the purest form of natural water.

(ii) Describe how modern adaptations of traditional rainwater harvesting methods are being carried out to conserve and store water.

Water harvesting system is a viable alternative, both socio-economically and environmentally. In ancient India, along with the sophisticated hydraulic structures, there existed an extraordinary tradition of water-harvesting system. People had in-depth knowledge of rainfall regimes and soil types and developed wide-ranging techniques to harvest rainwater, groundwater, river water and floodwater in keeping with the local ecological conditions and their water needs. In hill and mountainous regions, people built diversion channels like the ‘guls’ or ‘kuls’ of the Western Himalayas for agriculture. ‘Rooftop rainwater harvesting’ was commonly practised to store drinking water, particularly in Rajasthan. In the flood plains of Bengal, people developed inundation channels to irrigate their fields. In arid and semi-arid regions, agricultural fields were converted into rain-fed storage structures that allowed the water to stand and moisten the soil like the ‘khadins’ in Jaisalmer and ‘Johads’ in other parts of Rajasthan. In Gendathur, a remote backward village in Mysuru, Karnataka, villagers have installed, in their household’s rooftop, rainwater harvesting system to meet their water needs. Nearly 200 households have installed this system and the village has earned the rare distinction of being rich in rainwater. Rooftop rainwater harvesting is the most common practice in Shillong, Meghalaya. It is interesting because Cherapunjee and Mawsynram situated at a distance of 55 km. from Shillong receive the highest rainfall in the world, yet the state capital Shillong faces an acute shortage of water. Nearly every household in the city has a rooftop rainwater harvesting structure. Nearly 15-25 per cent of the total water requirement of the household comes from rooftop water harvesting. Tamil Nadu is the first state in India which has made rooftop rainwater harvesting structure compulsory to all the houses across the state.

The students will get to know about the following topics: