Means of transportation and communication are called the lifelines of a national economy. Chapter 7 of Class 10 Geography mainly focuses on transportation. In this chapter, students will mainly learn about roadways, railways, pipelines, waterways, seaports and airways. In the end, the chapter also talks about communication. After finishing the chapter, students will find the exercise questions. To help them in their studies, we have provided the NCERT Solutions for Class 10 Geography Social Science Chapter 7 on Lifelines of National Economy. It contains the answers to all the exercise questions.

Students can download the NCERT Solutions for Class 10 Geography PDF below. 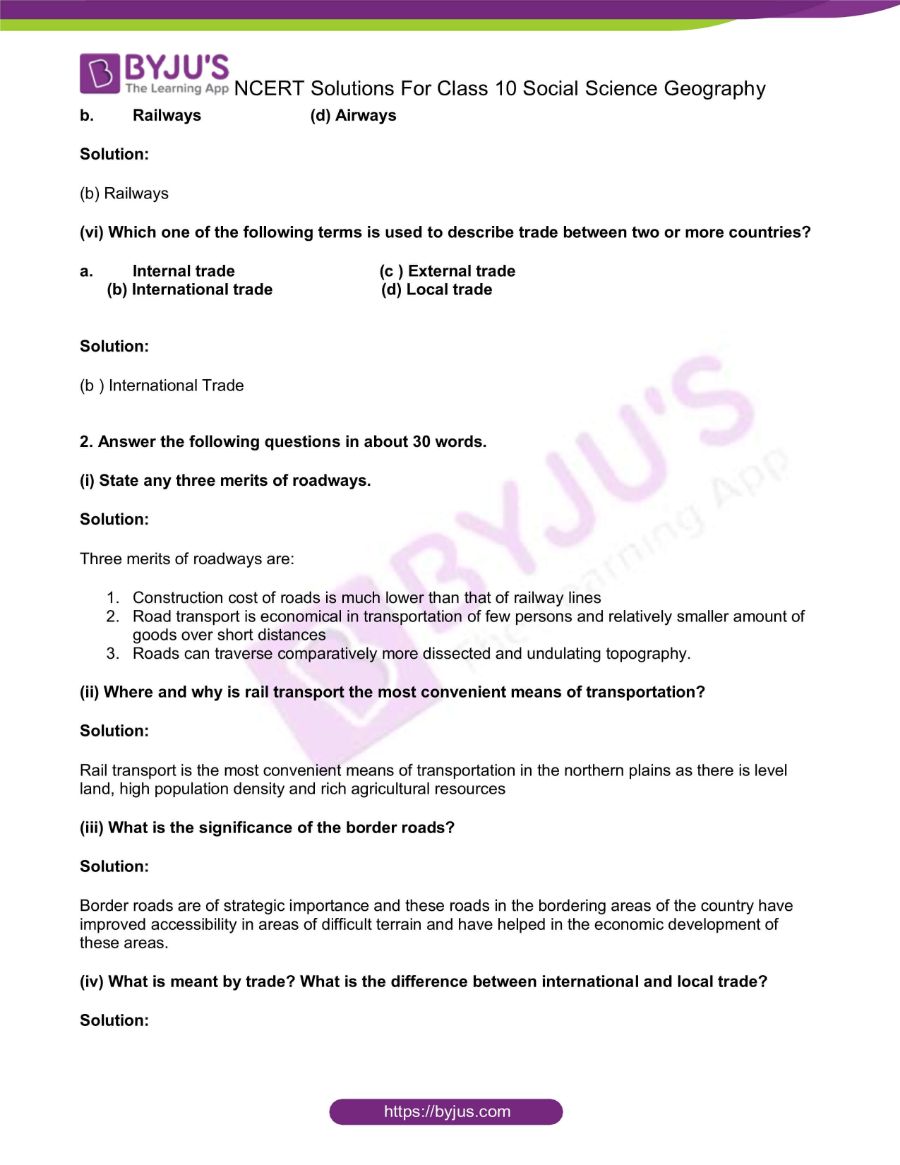 The solutions for chapter 7 of Lifelines of National Economy are given below. Students should also check NCERT Solutions for Class 10 for other subjects.

A.Which two of the following extreme locations are connected by the east-west corridor?

B. Which mode of transportation reduces trans-shipment losses and delays?

C. Which one of the following states is not connected with the H.V.J. pipeline?

D. Which one of the following ports is the deepest land-locked and well protected port along the east coast?

E. Which one of the following is the most important modes of transportation in India?

F. Which one of the following terms is used to describe trade between two or more countries?

2. Answer the following questions in about 30 words.

a.State any three merits of roadways.

Three merits of roadways are:

b. Where and why is rail transport the most convenient means of transportation?

Rail transport is the most convenient means of transportation in the northern plains as there are level stretches of land with high population density and rich agricultural resources.

c. What is the significance of the border roads?

Border roads are of strategic importance and these roads in the bordering areas of the country have improved accessibility in areas of difficult terrain and have helped in the economic development of these areas.

d. What is meant by trade? What is the difference between international and local trade?

The exchange of goods among people, states and countries are referred to as trade.

Local trade is carried out within cities, towns and villages of a country.

3. Answer the following questions in about 120 words.

a. Why are the means of transportation and communication called the lifelines of a nation and its economy?

The means of transportation and communication are called the lifelines of a nation and its economy because they are the pre-requisites for fast development. Today, India is well-linked with the rest of the world despite its vast size, diversity and linguistic and socio-cultural plurality. Railways, airways, waterways, newspapers, radio, cinema, television and internet etc. have been contributing to its socio-economic progress in many ways.

Along with trade, these different means of transport and communication have enriched our life and added substantially to growing amenities and facilities for the comforts of life.

b.Write a note on the changing nature of international trade in the last fifteen years.

International trade also depends on the relationship between the countries and other external factors like duties and tariffs on the transportation of goods. In the last fifteen years, different trade blocks have emerged which have changed how international trade was conducted previously.

The students will get to know about the following topics:

5. Tourism as a trade

Students can also visit NCERT Solutions Class 10 Social Science to get the chapterwise answers of other subjects such as History, Geography, Political Science and Economics.