In 1919, the First World War broke out in Europe, which had far-reaching consequences in the entire world. This war ignited the fight for India’s Independence. It ignited the spirit of nationalism in India due to the emergence of Satyagraha and Non-Cooperation movement.  The chapter talks about how Congress sought to develop the national movement, how different social groups participated in the movement, and how nationalism captured the imagination of people. Solving the NCERT Solutions for Class 10 History Chapter 2 will ensure a better grasp of this chapter. Students should solve these NCERT solutions regularly to make their concepts stronger, which in turn will help to fetch good marks. 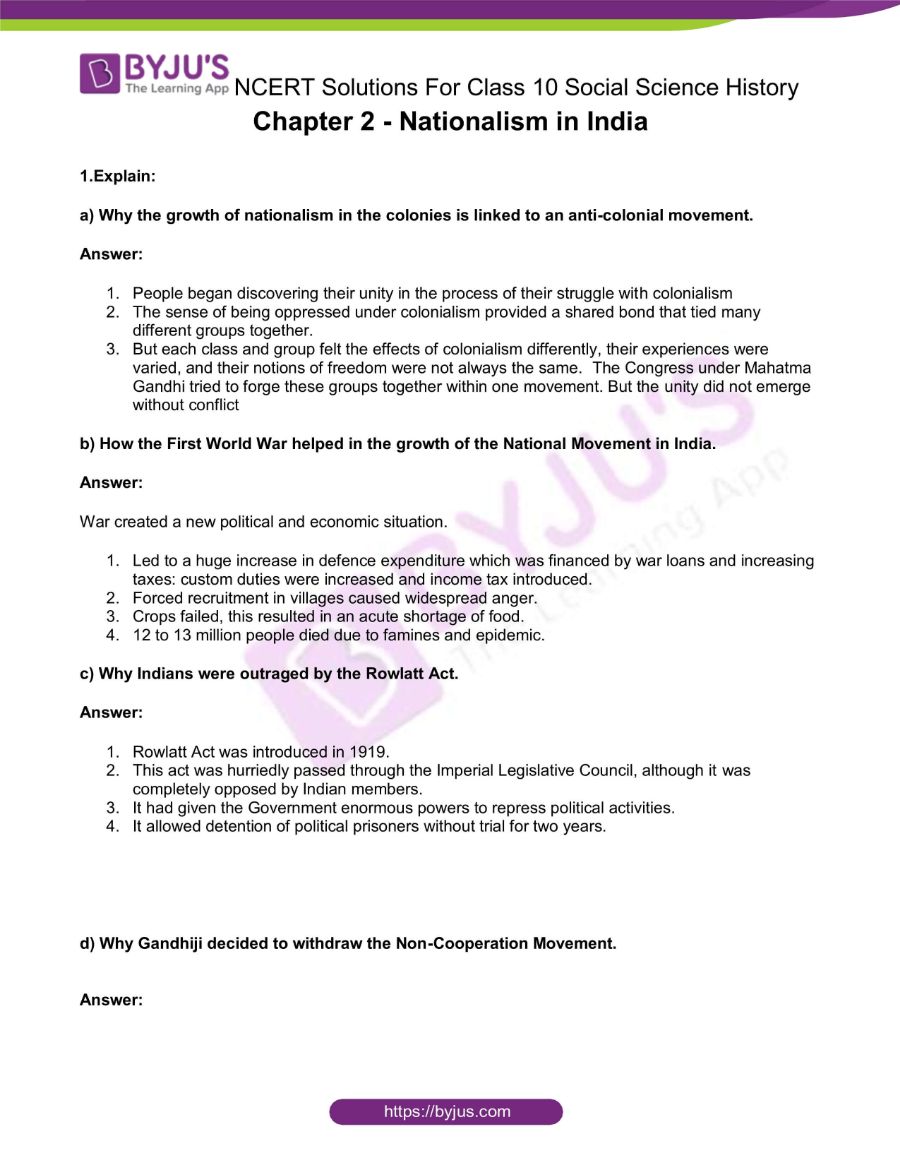 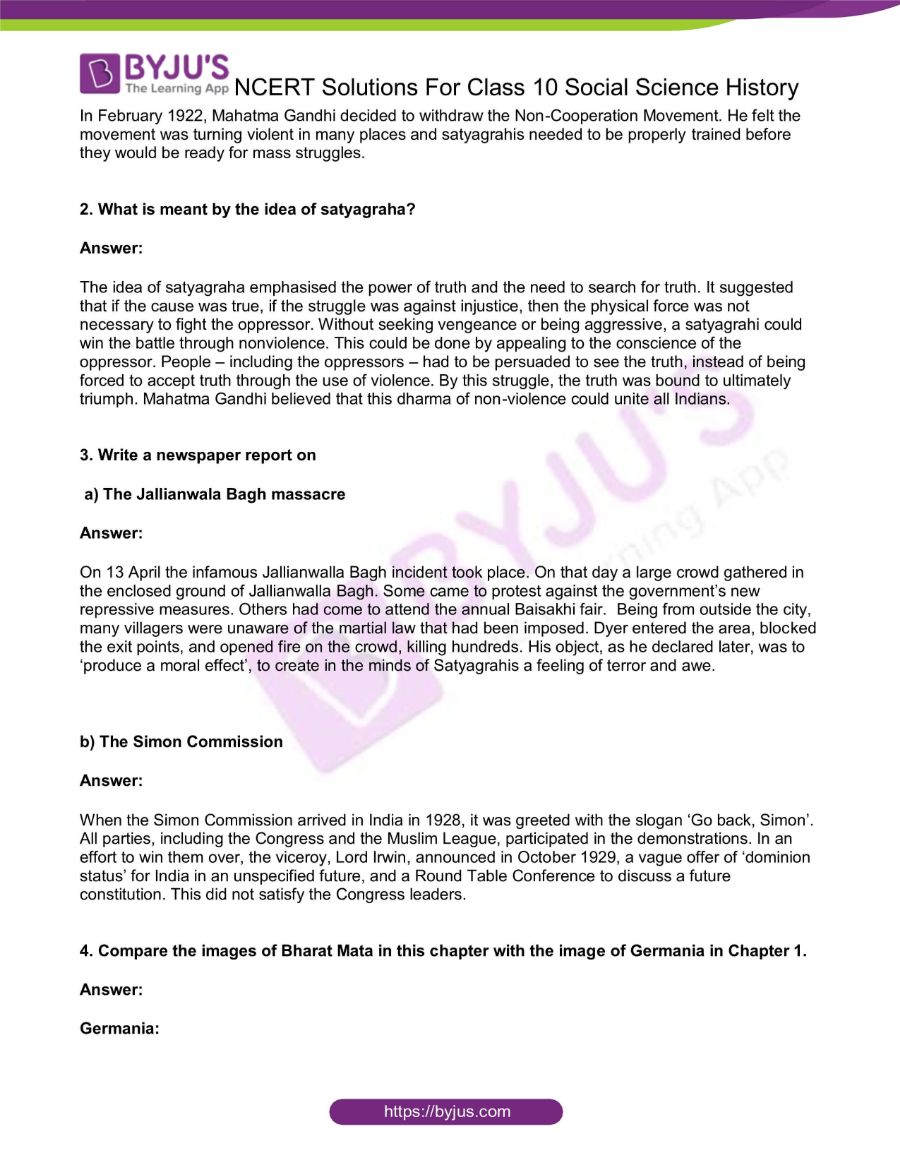 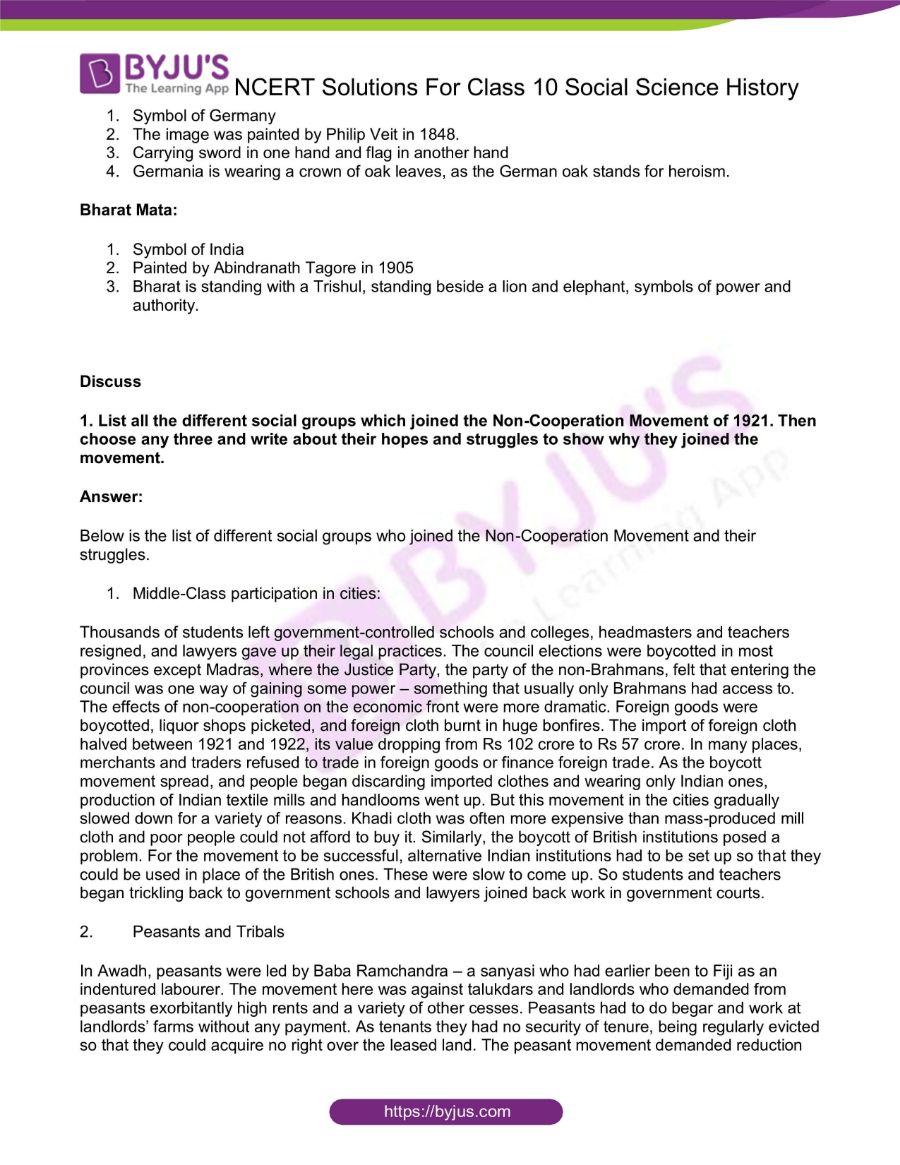 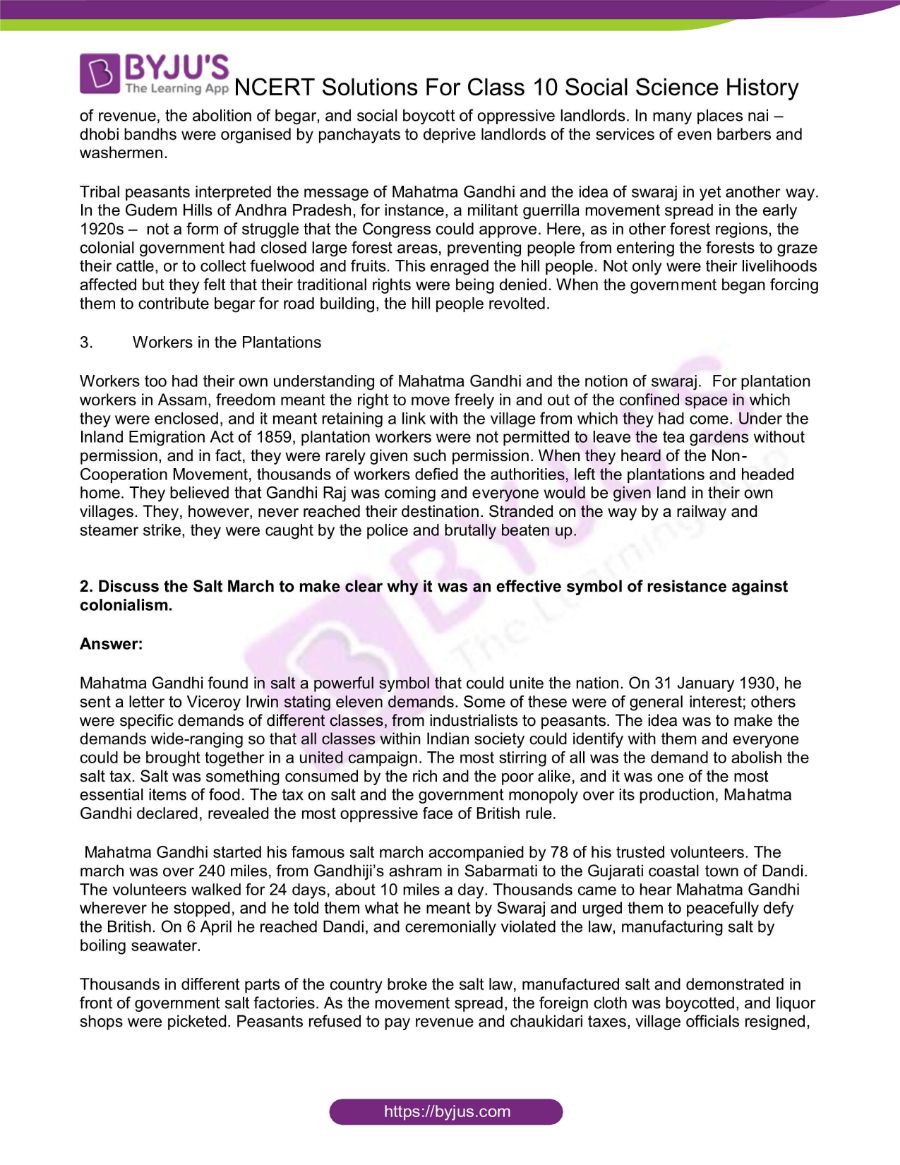 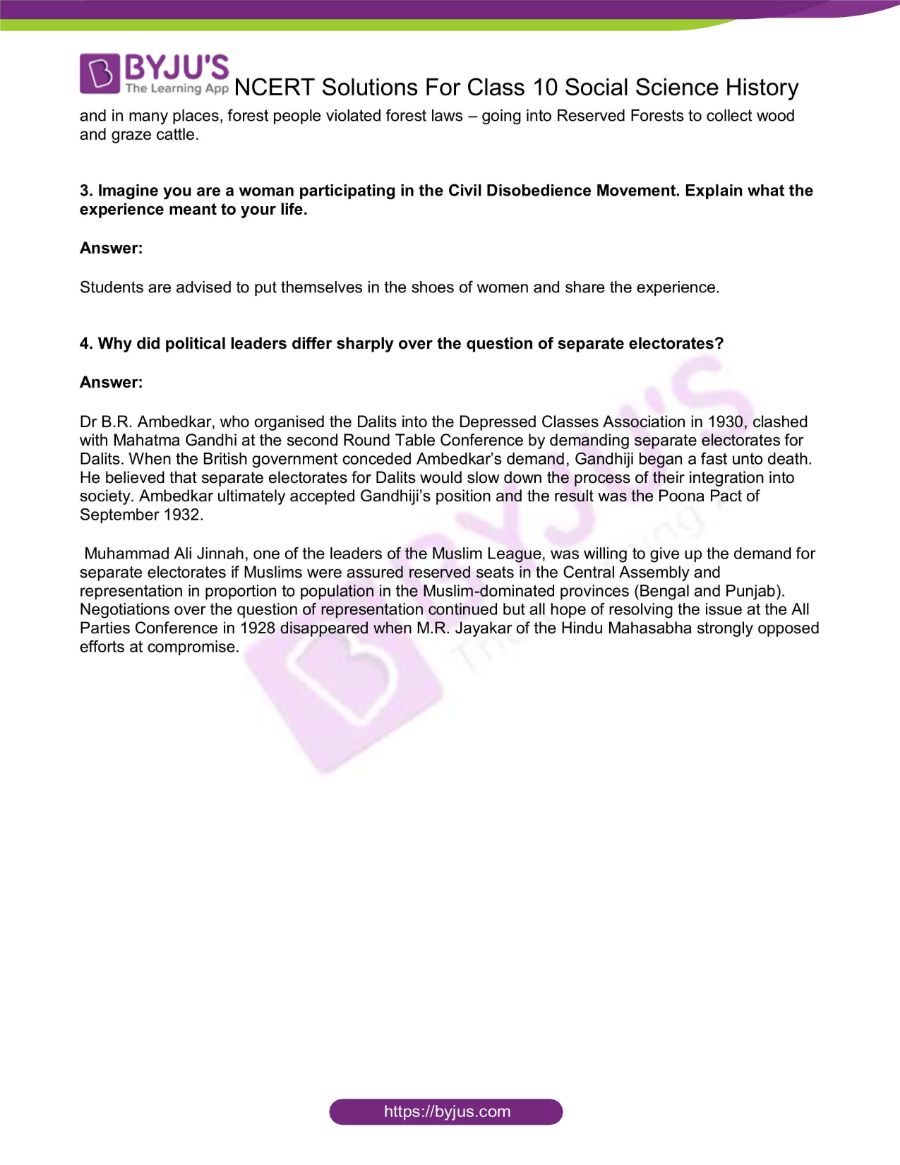 The solutions for chapter 2 of India and the Contemporary World are given below. Students should also check NCERT Solutions for Class 10 for other subjects.

a. Why the growth of nationalism in the colonies is linked to an anti-colonial movement.

b. How the First World War helped in the growth of the National Movement in India.

c. Why Indians were outraged by the Rowlatt Act.

d. Why Gandhiji decided to withdraw the Non-Cooperation Movement.

In February 1922, Mahatma Gandhi decided to withdraw the Non-Cooperation Movement. He felt the movement was turning violent in many places, and satyagrahis needed to be properly trained before they would be ready for mass struggles.

2. What is meant by the idea of satyagraha?

The idea of satyagraha emphasised the power of truth and the need to search for truth. It suggested that if the cause was true, if the struggle was against injustice, then the physical force was not necessary to fight the oppressor. Without seeking vengeance or being aggressive, a satyagrahi could win the battle through nonviolence. This could be done by appealing to the conscience of the oppressor. People – including the oppressors – had to be persuaded to see the truth, instead of being forced to accept truth through the use of violence. By this struggle, the truth was bound to triumph ultimately. Mahatma Gandhi believed that this dharma of non-violence could unite all Indians.

3. Write a newspaper report on

a) The Jallianwala Bagh massacre

On 13 April, the infamous Jallianwalla Bagh incident took place. On that day a large crowd was gathered in the enclosed ground of Jallianwalla Bagh. Some came to protest against the government’s new repressive measures. Others had come to attend the annual Baisakhi fair. Being from outside the city, many villagers were unaware of the martial law that had been imposed. Dyer entered the area, blocked the exit points, and opened fire on the crowd, killing hundreds. His objective, as he declared later, was to ‘produce a moral effect’, in the minds of Satyagrahis. A feeling of terror and awe.

b) The Simon Commission

When the Simon Commission arrived in India in 1928, it was greeted with the slogan ‘Go back, Simon’. All parties, including the Congress and the Muslim League, participated in the demonstrations. In an effort to win them over, the viceroy, Lord Irwin, announced in October 1929, a vague offer of ‘dominion status’ for India in an unspecified future, and a Round Table Conference to discuss a future constitution. This did not satisfy the Congress leaders.

4. Compare the images of Bharat Mata in this chapter with the image of Germania in Chapter 1.

1. List all the different social groups which joined the Non-Cooperation Movement of 1921. Then choose any three and write about their hopes and struggles to show why they joined the movement.

Below is the list of different social groups who joined the Non-Cooperation Movement and their struggles.

Thousands of students left government-controlled schools and colleges, headmasters and teachers resigned, and lawyers gave up their legal practices. The council elections were boycotted in most provinces except Madras, where the Justice Party, the party of the non-Brahmans, felt that entering the council was one way of gaining some power – something that usually only Brahmans had access to. The effects of non-cooperation on the economic front were more dramatic. Foreign goods were boycotted, liquor shops were picketed, and foreign cloth was burnt in huge bonfires. The import of foreign cloth halved between 1921 and 1922, its value dropping from Rs 102 crore to Rs 57 crore. In many places, merchants and traders refused to trade in foreign goods or finance foreign trade. As the boycott movement spread and people began discarding imported clothes and wearing only Indian ones, production of Indian textile mills and handlooms went up. But this movement in the cities gradually slowed down for a variety of reasons. Khadi cloth was often more expensive than mass-produced mill cloth and poor people could not afford to buy it. Similarly, the boycott of British institutions posed a problem. For the movement to be successful, alternative Indian institutions had to be set up so that they could be used in place of the British ones. These were slow to come up. So students and teachers began trickling back to government schools and lawyers joined back work in government courts.

In Awadh, peasants were led by Baba Ramchandra – a sanyasi who had earlier been to Fiji as an indentured labourer. The movement here was against talukdars and landlords who demanded exorbitantly high rents and a variety of other cesses from peasants. Peasants had to do begar and work at landlords’ farms without any payment. As tenants, they had no security of tenure, being regularly evicted so that they could acquire no right over the leased land. The peasant movement demanded reduction of revenue, the abolition of begar and social boycott of oppressive landlords. In many places ‘nai-dhobi bandhs’ were organised by panchayats to deprive landlords of the services of barbers and washermen.

Tribal peasants interpreted the message of Mahatma Gandhi and the idea of swaraj in yet another way. In the Gudem Hills of Andhra Pradesh, for instance, a militant guerrilla movement spread in the early 1920s – not a form of struggle that the Congress could approve. In other forest regions, the colonial government had closed large forest areas, preventing people from entering the forests to graze their cattle or to collect fuelwood and fruits. This enraged the hill people. Not only were their livelihoods affected, but they felt that their traditional rights were being denied. When the government began forcing them to contribute begar for road building, the hill people revolted.

Workers in the Plantations:-

Workers too had their own understanding of Mahatma Gandhi and the notion of swaraj. For plantation workers in Assam, freedom meant the right to move freely in and out of the confined space in which they were enclosed, and it meant retaining a link with the village from which they had come. Under the Inland Emigration Act of 1859, plantation workers were not permitted to leave the tea gardens without permission, and in fact, they were rarely given such permission. When they heard of the Non-Cooperation Movement, thousands of workers defied the authorities, left the plantations and headed home. They believed that Gandhi Raj was coming and everyone would be given land in their own villages. They, however, never reached their destination. Stranded on the way by a railway and steamer strike, they were caught by the police and brutally beaten up.

2. Discuss the Salt March to make clear why it was an effective symbol of resistance against colonialism.

Mahatma Gandhi found in salt a powerful symbol that could unite the nation. On 31 January 1930, he sent a letter to Viceroy Irwin stating eleven demands. Some of these were of general interest; others were specific demands of different classes, from industrialists to peasants. The idea was to make the demands wide-ranging so that all classes within Indian society could identify with them and everyone could be brought together in a united campaign. The most stirring of all was the demand to abolish the salt tax. Salt was something consumed by the rich and the poor alike, and it was one of the essential items of food. The tax on salt and the government monopoly over its production, Mahatma Gandhi declared, revealed the most oppressive face of British rule.

Mahatma Gandhi started his famous salt march accompanied by 78 of his trusted volunteers. The march was over 240 miles, from Gandhiji’s ashram in Sabarmati to the Gujarati coastal town of Dandi. The volunteers walked for 24 days, about 10 miles a day. Thousands came to hear Mahatma Gandhi wherever he stopped, and he told them what he meant by Swaraj and urged them to peacefully defy the British. On 6 April he reached Dandi, and ceremonially violated the law, manufacturing salt by boiling seawater.

Thousands in different parts of the country broke the salt law, manufactured salt and demonstrated in front of government salt factories. As the movement spread, the foreign cloth was boycotted, and liquor shops were picketed. Peasants refused to pay revenue and chowkidar taxes, village officials resigned, and in many places, forest people violated forest laws – going into Reserved Forests to collect wood and graze cattle.

3. Imagine you are a woman participating in the Civil Disobedience Movement. Explain what the experience meant to your life.

Students are advised to put themselves in the shoes of women and share the experience.

4. Why did political leaders differ sharply over the question of separate electorates?

Dr B.R. Ambedkar, who organised the Dalits into the Depressed Classes Association in 1930, clashed with Mahatma Gandhi at the second Round Table Conference by demanding separate electorates for Dalits. When the British government conceded Ambedkar’s demand, Gandhiji began a fast unto death. He believed that separate electorates for Dalits would slow down the process of their integration into society. Ambedkar ultimately accepted Gandhiji’s position, and the result was the Poona Pact of September 1932.

Muhammad Ali Jinnah was willing to give up the demand for separate electorates if Muslims were assured reserved seats in the Central Assembly and representation in proportion to population in the Muslim-dominated provinces (Bengal and Punjab). Negotiations over the question of representation continued, but all hope of resolving the issue at the All Parties Conference in 1928 disappeared when M.R. Jayakar of the Hindu Mahasabha strongly opposed efforts at compromise.

Chapter 2 of NCERT Social Science History textbook – Indian and the Contemporary World-II is titled as ‘ Nationalism in India.’ The anti-colonial movement gave to rise to the feeling of Nationalism in India. The rule of oppression under British suffocated the people, and there came the wave of revolts and struggles that Indian went through to free themselves from the clutches of colonisers. How different groups reacted to this feeling of Nationalism will be discussed in the chapter.