*According to the Revised CBSE Syllabus 2020-21, anyone out of chapter 3 or chapter 4 shall be chosen.

In Europe, the age of industrialisation marked the beginning of modernisation. Along with industrialisation, factories were set up, which generated large-scale production of goods leading to worldwide trade. New invention and innovation in technology accelerated this process. Colonies were expanded in European nations and modernization also reached there. This chapter will focus on the history of Britain, the first industrial nation, and then India, where the pattern of industrial change was conditioned by colonial rule. Students can make use of these NCERT Solutions for Class 10 History Chapter 4 while solving the textbook questions.

Individual subject experts at BYJU’S have created NCERT Solutions according to the latest CBSE guidelines. This is in fact one of the best learning guides students can use while preparing for their exams.

Chapter 4 The Age Of Industrialisation 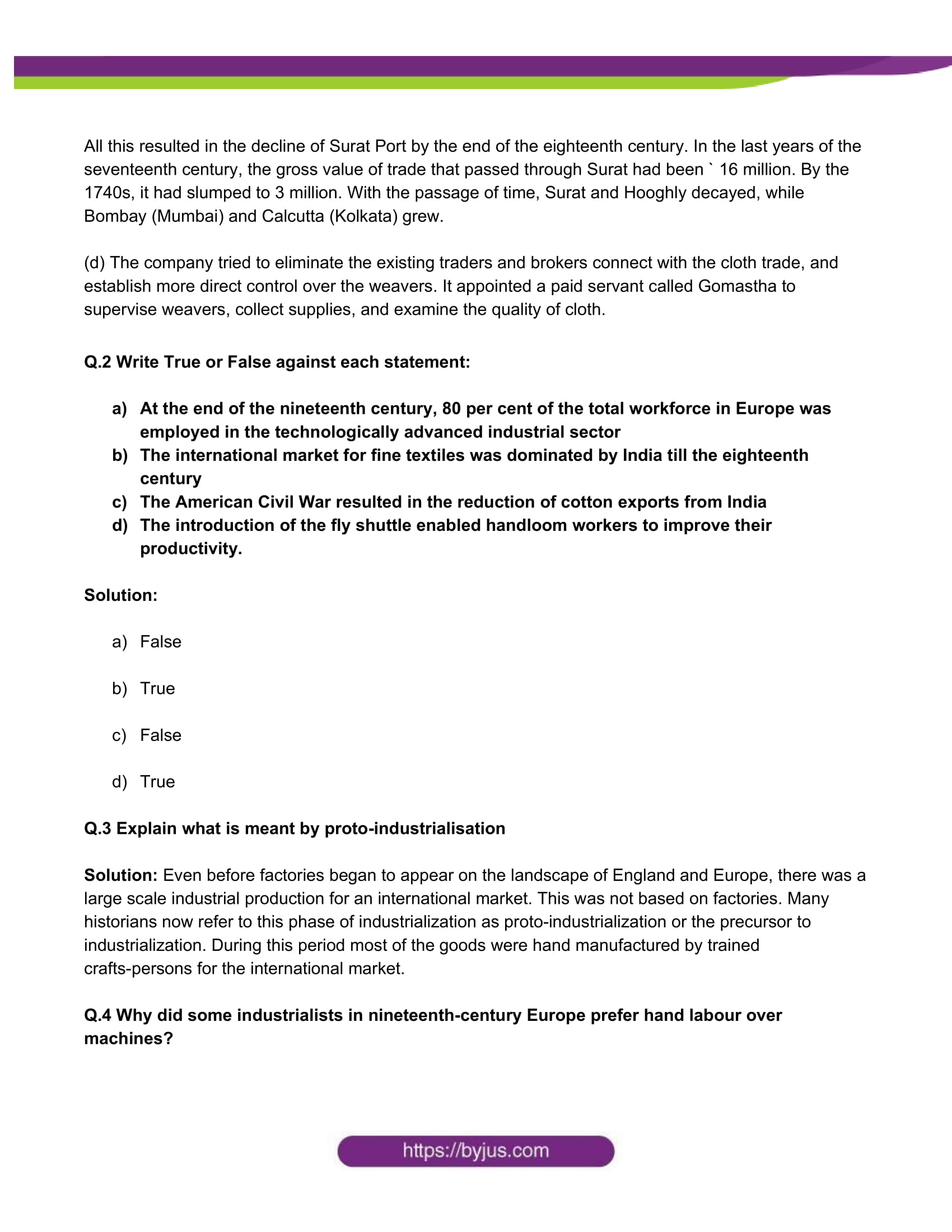 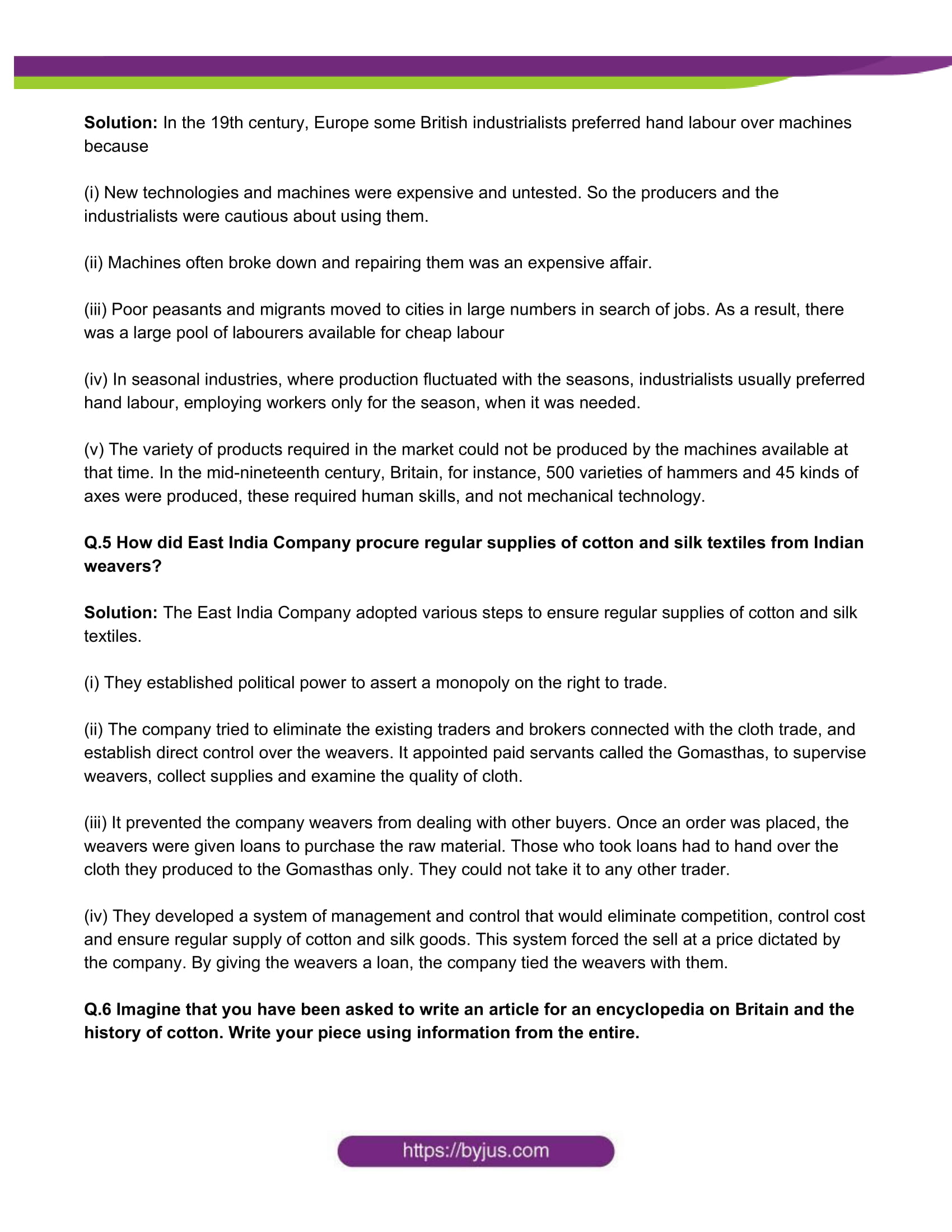 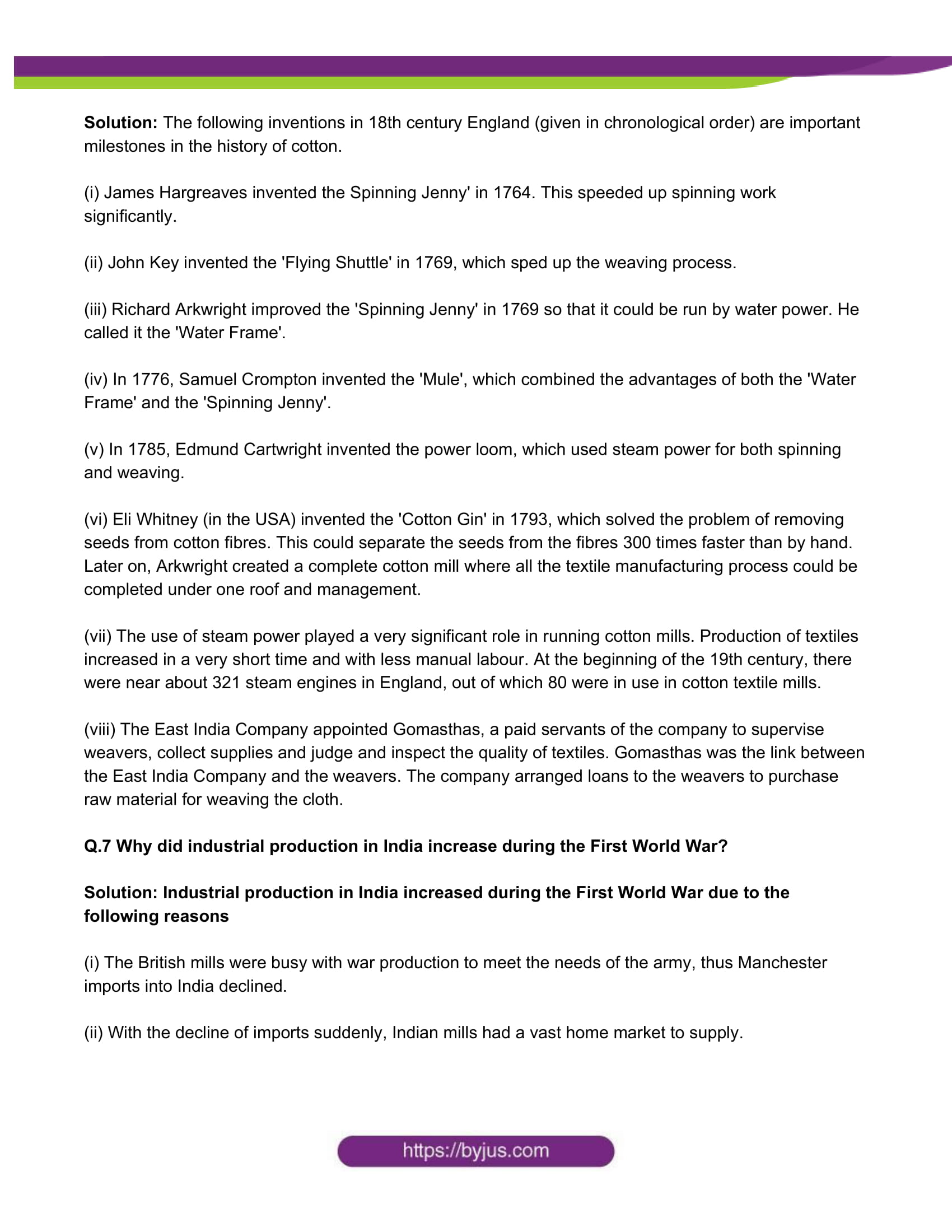 The Solutions for Chapter 4 – The Age of Industrialisation are given below. Students should also check NCERT Solutions for Class 10 for other subjects.
Page No. 102

All this resulted in the decline of Surat Port by the end of the eighteenth century. In the last years of the seventeenth century, the gross value of trade that passed through Surat had been 16 million. By the 1740s, it had slumped to 3 million. With the passage of time, Surat and Hooghly decayed, while Bombay (Mumbai) and Calcutta (Kolkata) grew.

2. Write True or False against each statement:

6. Imagine that you have been asked to write an article for an encyclopedia on Britain and the history of cotton. Write your piece using information from the entire.
Solution: The following inventions in 18th century England (given in chronological order) are important milestones in the history of cotton.

The Age of Industrialisation Summary

The NCERT Class 10 India and the Contemporary World – II Chapter 4 talks about the following topics:

1.1 The Coming Up of the Factory 1.2 The Pace of Industrial Change

3.1 The Age of Indian Textiles 3.2 What Happened to Weavers? 3.3 Manchester Comes to India

4.1 Early Entrepreneurs 4.2 Where Did the Workers Come From?

List the important topics students should learn from the Chapter 4 of NCERT Solutions for Class 10 History?

The important topics students should learn from Chapter 4 of NCERT Solutions for Class 10 History are –
1. Before the Industrial Revolution
2. Hand Labour and Steam Power
3. Industrialisation in the Colonies
4. Factories Come Up
5. The Peculiarities of Industrial Growth
6. Market for Goods.


What does the Chapter 4 of NCERT Solutions for Class 10 History brief about?

The Chapter 4 of NCERT Solutions for Class 10 History brief about industrialisation and how it marked the beginning of modernisation. Students will also understand how setting up factories produced large scale production which in turn lead to worldwide trade. The NCERT Solutions provides answers to questions regarding the history of Britain, the first industrial nation, and the pattern of industrial change conditioned by colonial rule in India. Experts at BYJU’S have created these answers according to the latest CBSE guidelines to help students ace their board exam.

Why should I download the NCERT Solutions for Class 10 History Chapter 4 from BYJU’S?

For students aspiring to secure high scores in the board exams, the NCERT Solutions from BYJU’S is the best resource for reference. It’s a one-stop solution for students to get their doubts cleared instantly as well as to learn new topics effectively. Students can obtain comprehensive knowledge on all chapters from the solutions PDF available for free at BYJU’S. While answering the textbook questions, students can cross-check their answer with this resource to understand where they lag and can improve on them for scoring high marks in the exam.