According to the Revised term-wise CBSE Syllabus 2022-23, this chapter has been removed.

Chapter 5 of NCERT Solutions for Class 10 History elaborately explains the development of print, from its beginnings in East Asia to its expansion in Europe in India. It’s hard to imagine a world without printed matter. We find printed books, journals, newspapers, official circulars, calendars, diaries, advertisements, etc. This world of print has a history in itself, which has shaped our contemporary world. It also makes students understand the impact of the spread of technology and consider how social lives and cultures changed with the coming of print. The provided solutions of Chapter 5 covers all the concepts as mentioned above. So, students are advised to go through these NCERT Solutions for Class 10 History Chapter 5 to get a thorough understanding of the chapter.

Utilizing the NCERT Solutions for Class 10 History will aid students in understanding the key facts at ease. Also, all the NCERT Solutions are in accordance with the latest CBSE guidelines and marking schemes. Download the free PDF of these solutions from the link provided below. 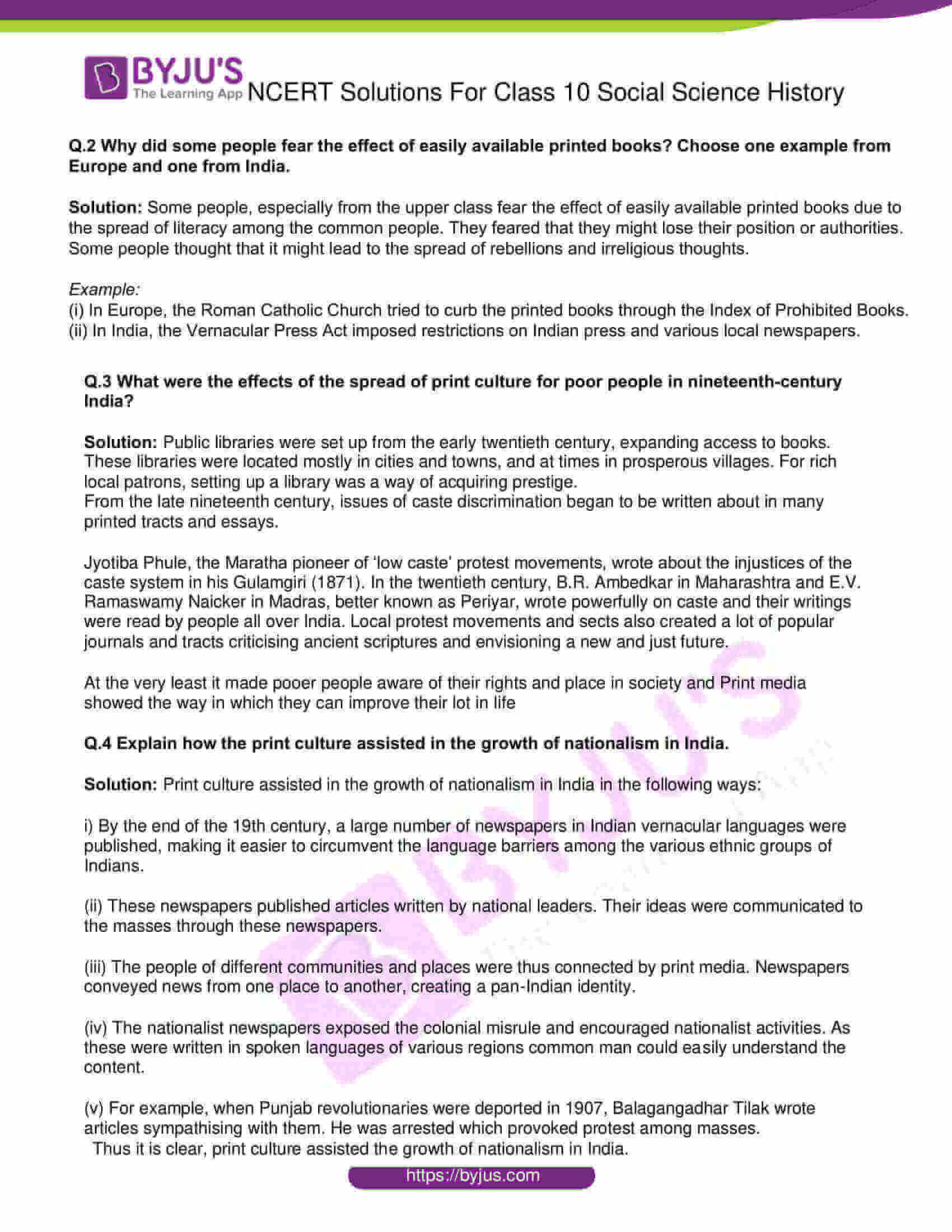 Q.1 Give reason for the following:

Solution: (a) Marco Polo, the Italian explorer, visited China and learnt the technology of woodblock printing. When he returned to Italy in 1295, he brought this knowledge back with him. Gradually this knowledge spread from Italy to other parts of Europe.

(b) In 1517, Martin Luther, the religious reformer, wrote ninety-five theses that criticised the corrupt practices of the Catholic Church and pasted these on the church door in Wittenberg. Very soon, thousands of copies of Luther’s theses were printed, spreading his ideas among people. Martin Luther was deeply moved by realizing the power of printing, which brought about the reformation movement and the eventual birth of Protestantism.

(c) Print and popular literature encouraged many distinctive interpretations of religious faiths and ideas. In the 16th century, Manocchio, a roller in Italy, began to read books available readily in his locality. He gave a new interpretation of the Bible and formulated a view of God and creation that enraged the Roman Catholic Church. As a result, Manocchio was hauled up twice and ultimately executed when the Roman Catholic Church began its inquisition.

(d) Mahatma Gandhi said these words in 1922 during the Non-cooperation Movement (1920-22). According to him, without the liberty of speech, the liberty of the press and freedom of association, no nation can even survive. If the country was to get free from foreign domination, then these liberties were quite important.

Q.2 Write short notes on what you know about:

Solution: (a) The Gutenberg Press was the first printing press of Europe. It was invented by Johannes Gutenberg of Strasbourg. He grew up in a large agricultural estate and had knowledge and experience in operating olive and wine presses. He invented the printing press around the year 1448 with the Bible being the first book to be printed.

(b) Erasmus, the Latin scholar, was not happy with the printing of books because he was afraid that this would lead to the circulation of books with rebellious ideas. He felt that although a few books may give useful information, the majority of books may just be irrelevant or illogical through which scandalous of irreligious ideas will spread, ultimately leading to incitement of rebellion.

(c) The Vernacular Press Act was passed in 1878 by the British government in India. This act provided the government with extensive rights to censor reports and editorials in the Vernacular Press. If a Vernacular Paper published any seditious material, the paper was banned, and its printing machinery was seized and destroyed.

Q.3 What did the spread of print culture in the nineteenth century India mean to:

Solution: (a) Women: Women became as important as readers and writers. Reading habits improved among them. With an increase in literacy, women took great interest in reading and writing. Many journals started emphasizing the importance of women’s education. Many magazines and books were especially published for women. The print culture gave women some amount of freedom to read and develop their own views on various issues, especially those related to women.

(b) The Poor: As the literacy rate improved in Europe as well as in India, printed material, especially for entertainment, began to reach even the poor. In England ‘penny magazines’ were carried by peddlers and sold for a penny, so that even poor people could buy them. Those who could not read could listen to the stories and folklore. These stories and folklore could be read out to them by others. Books could be hired on a nominal fee from some book owners. Even in India, very cheap small books were brought to the market in 19th century Madras towns,  which allowed poor people to have access to print culture.

(c) Reformers: Reformers used newspapers, journals and books to highlight the social evils prevailing in the society. Raja Ram Mohan Roy published the ‘Sambad Kaumudi’ to highlight the plight of widows. From the 1860s, many Bengali women writers like Kailashbashini Debi wrote books highlighting the experiences of women, about how women were imprisoned at home, kept in ignorance, forced to do hard domestic labour and were treated unjustly by the menfolk they served.

Q.1 Why did some people in the eighteenth century Europe think that culture would bring enlightenment and end despotism?

Q.2 Why did some people fear the effect of easily available printed books? Choose one example from Europe and one from India.

Solution: Some people, especially from the upper class fear the effect of easily available printed books due to the spread of literacy among the common people. They feared that they might lose their position or authorities. Some people thought that it might lead to the spread of rebellions and irreligious thoughts.

Example:
(i) In Europe, the Roman Catholic Church tried to curb the printed books through the Index of Prohibited Books.
(ii) In India, the Vernacular Press Act imposed restrictions on Indian press and various local newspapers.

Q.3 What were the effects of the spread of print culture for poor people in nineteenth-century India?

Solution: Public libraries were set up from the early twentieth century, expanding access to books. These libraries were located mostly in cities and towns and at times in prosperous villages. For rich local patrons, setting up a library was a way of acquiring prestige.

From the late nineteenth century, issues of caste discrimination were written about in many printed tracts and essays.

Jyotiba Phule, the Maratha pioneer of ‘low caste’ protest movements, wrote about the injustices of the caste system in his Gulamgiri (1871). In the twentieth century, B.R. Ambedkar in Maharashtra and E.V. Ramaswamy Naicker in Madras (better known as Periyar) wrote powerfully on caste, and their writings were read by people all over India. Local protest movements and sects also created a lot of popular journals and tracts, criticising ancient scriptures and envisioning a new and just future.

At the very least, it made pooer people aware of their rights and their place in society and Print media showed the way in which they can improve their lot in life.

Q.4 Explain how the print culture assisted in the growth of nationalism in India.

Solution: Print culture assisted in the growth of nationalism in India in the following ways:

Thus it is clear that print culture assisted the growth of nationalism in India.

The NCERT Solutions for Class 10 Social Studies – History India and the Contemporary World – II Chapter 5 talks about the following topics:

2.1 Gutenberg and the Printing Press

3.2 Religious Debates and the Fear of Print

4.1 Tremble, therefore, tyrants of the world!

4.2 Print Culture and the French Revolution

6.1 Manuscripts Before the Age of Print

8.2 Print and the Poor People

What does the Chapter 5 of NCERT Solutions for Class 10 History deal with?

The history of print and the development of print from its beginnings in East Asia to its expansion in Europe and India have elaborately explained in Chapter 5 of NCERT Solutions for Class 10 History. The spread of technology, how social lives and cultures changed with the introducing of print are also well explained in this chapter. To learn more about these topics in detail, students can refer to the NCERT Solutions created by subject experts at BYJU’S.

How can I make use of the NCERT Solutions for Class 10 History Chapter 5 for board exam preparation?

The NCERT Solutions for Class 10 History Chapter 5 consists of answers to the textbook problems presented in a detailed manner highlighting the main topics. Studying these answers using this resource from BYJU’S will give proper guidance about the important topics covered in the chapter. It’s effective when students use this resource while reading new topics of the chapter or during their revisions.

What are the main topics discussed in Chapter 5 of NCERT Solutions for Class 10 History?

The main topics present in chapter 3 of NCERT Solutions for Class 10 History are:
1. The First Printed Books
2. Print Comes to Europe
3. The Print Revolution and Its Impact
4. The Reading Mania
5. The Nineteenth Century
6. India and the World of Print
7. Religious Reform and Public Debates
8. New Forms of Publication
9. Print and Censorship