NCERT Solutions for Class 8 History Chapter 6 – Weavers, Iron Smelters and Factory Owners contains the solutions to the exercises given in the History book – Our Pasts-III. NCERT Solutions to the exercises are provided which will be useful for school exams as the source of these are from the NCERT textbooks. The NCERT solutions are easy and accurate which will align school students’ preparation with the questions asked in the examinations. 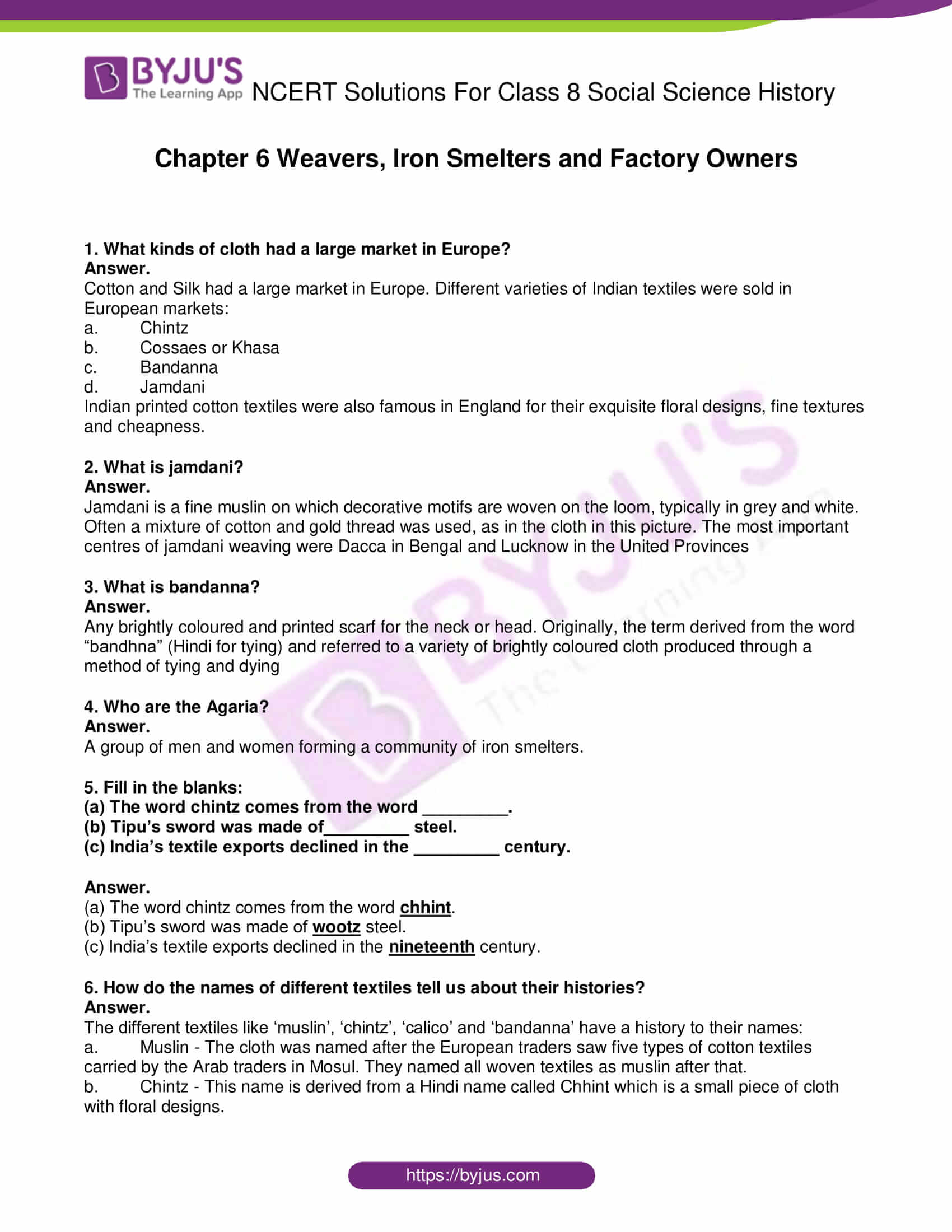 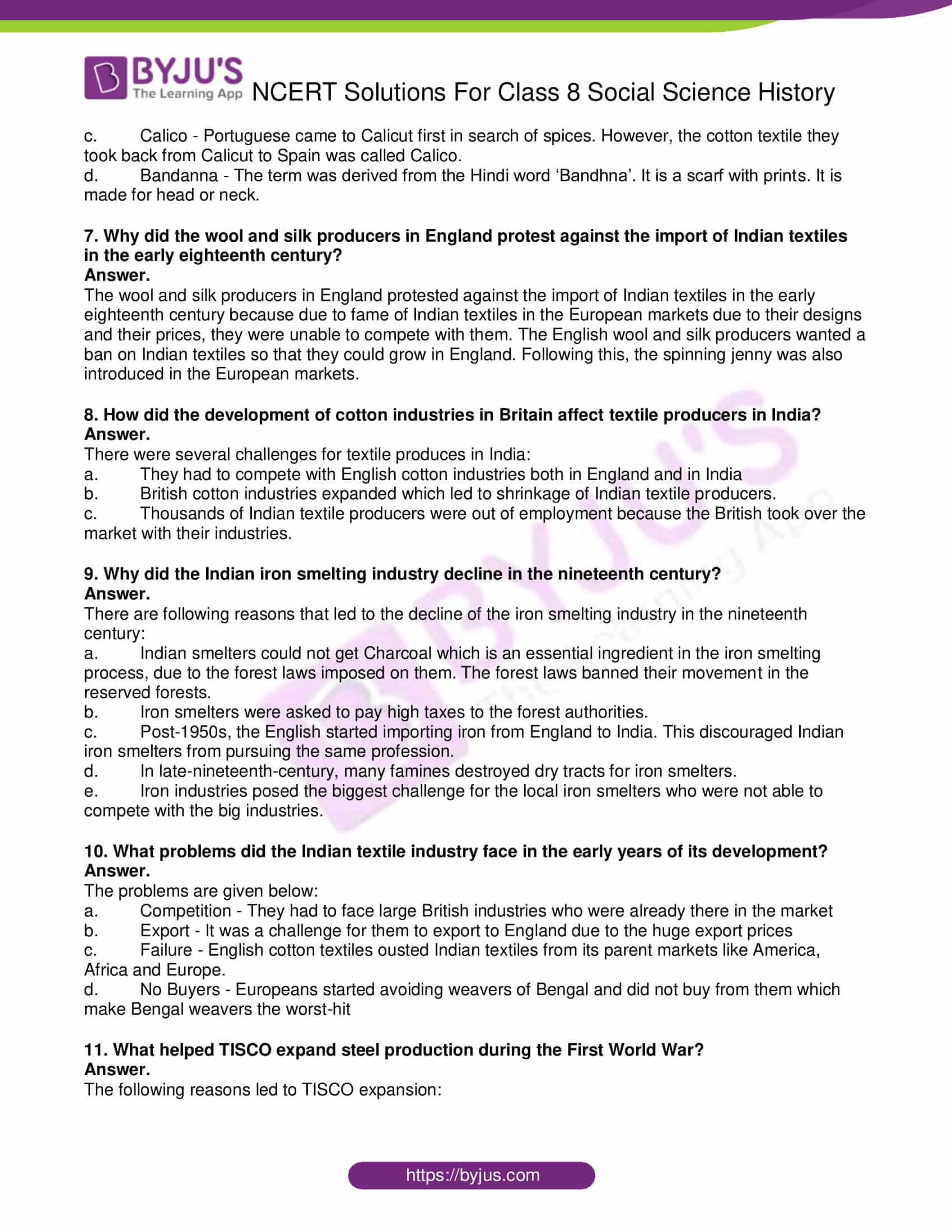 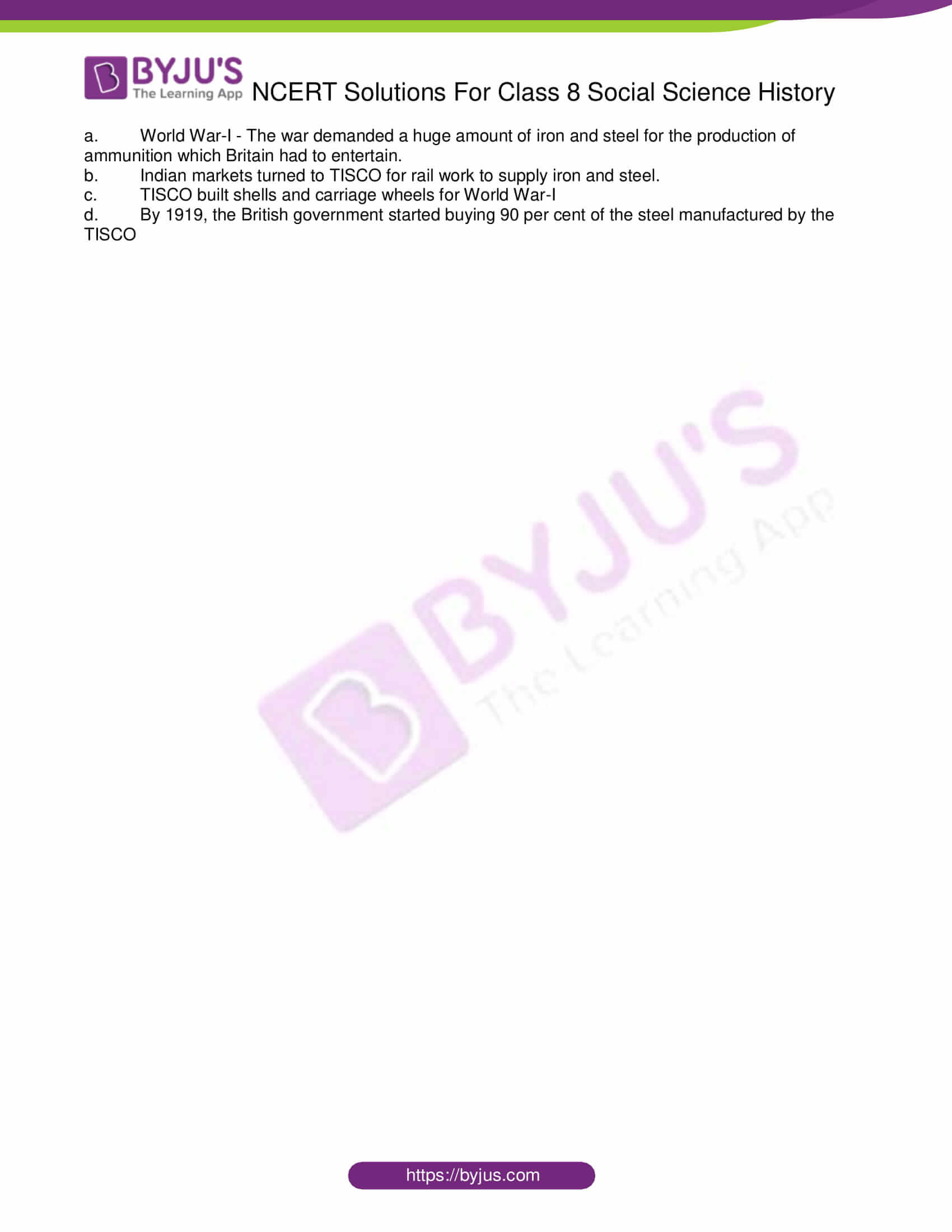 The solutions for chapter 6 of Our Pasts-III are given below. Students should also check NCERT Solutions for Class 8 for other subjects.

1. What kinds of cloth had a large market in Europe?

Cotton and Silk had a large market in Europe. Different varieties of Indian textiles were sold in European markets:

Jamdani is a fine muslin on which decorative motifs are woven on the loom, typically in grey and white. Often a mixture of cotton and gold thread was used, as in the cloth in this picture. The most important centres of jamdani weaving were Dacca in Bengal and Lucknow in the United Provinces.

Bandannas are any brightly coloured and printed scarf for the neck or head. Originally, the term derived from the word “bandhna” (Hindi for tying) and referred to a variety of brightly coloured cloth produced through a method of tying and dying.

A group of men and women forming a community of iron smelters.

(a) The word chintz comes from the word chhint.

(b) Tipu’s sword was made of wootz steel.

6. How do the names of different textiles tell us about their histories?

The different textiles like ‘muslin’, ‘chintz’, ‘calico’ and ‘bandanna’ have a history to their names:

a. Muslin – The cloth was named after the European traders who saw five types of cotton textiles carried by the Arab traders in Mosul. They named all woven textiles as ‘muslin’ after that.

b. Chintz – This name is derived from a Hindi name called ‘Chhint’ which is a small piece of cloth with floral designs.

c. Calico – Portuguese came to Calicut first in search of spices. However, the cotton textile they took back from Calicut to Spain was called Calico.

d. Bandanna – The term was derived from the Hindi word ‘Bandhna’. It is a scarf with prints. It is made for head or neck.

7. Why did the wool and silk producers in England protest against the import of Indian textiles in the early eighteenth century?

8. How did the development of cotton industries in Britain affect textile producers in India?

There were several challenges for textile produces in India:

a. They had to compete with English cotton industries both in England and in India

b. British cotton industries expanded, which led to the shrinkage of Indian textile producers.

c. Thousands of Indian textile producers were out of employment because the British took over the market with their industries.

9. Why did the Indian iron smelting industry decline in the nineteenth century?

There are following reasons that led to the decline of the iron smelting industry in the nineteenth century:

a. Indian smelters could not get Charcoal due to the forest laws imposed on them. Charcoal is an essential ingredient in the iron smelting process and the industry could not thrive without it’s supply. The forest laws banned their movement in the reserved forests.

b. Iron smelters were asked to pay high taxes to the forest authorities.

e. Iron industries posed the biggest challenge for the local iron smelters who were not able to compete with the big industries.

10. What problems did the Indian textile industry face in the early years of its development?

The problems are given below:

a. Competition – They had to face large British industries who were already there in the market.

b. Export – It was a challenge for them to export to England due to the huge export prices.

d. No Buyers – Europeans started avoiding the weavers of Bengal and did not buy from them, which made the Bengal weavers the worst-hit.

a. World War-I – The war demanded a huge amount of iron and steel for the production of ammunition, which was a demand that Britain had to entertain.

b. Indian markets turned to TISCO for rail work to supply iron and steel.

d. By 1919, the British government started buying 90 per cent of the steel manufactured by the TISCO

Chapter 6 of NCERT Our Pasts-III deals with the state of weavers, iron smelters and factory owners. The chapter talks about the weavers and iron smelters and how they attained their livelihood under colonial rule. The export of Indian cloth to European markets, the suppression of the Indian weavers by the British textiles industry and the role of TISCO are discussed as well.

a. Words tell us histories

b. Indian textiles in European markets

c. Who were the weavers?

d. The decline of Indian textiles

a. Abandoned furnaces in villages

b. Iron and steel factories come up in India