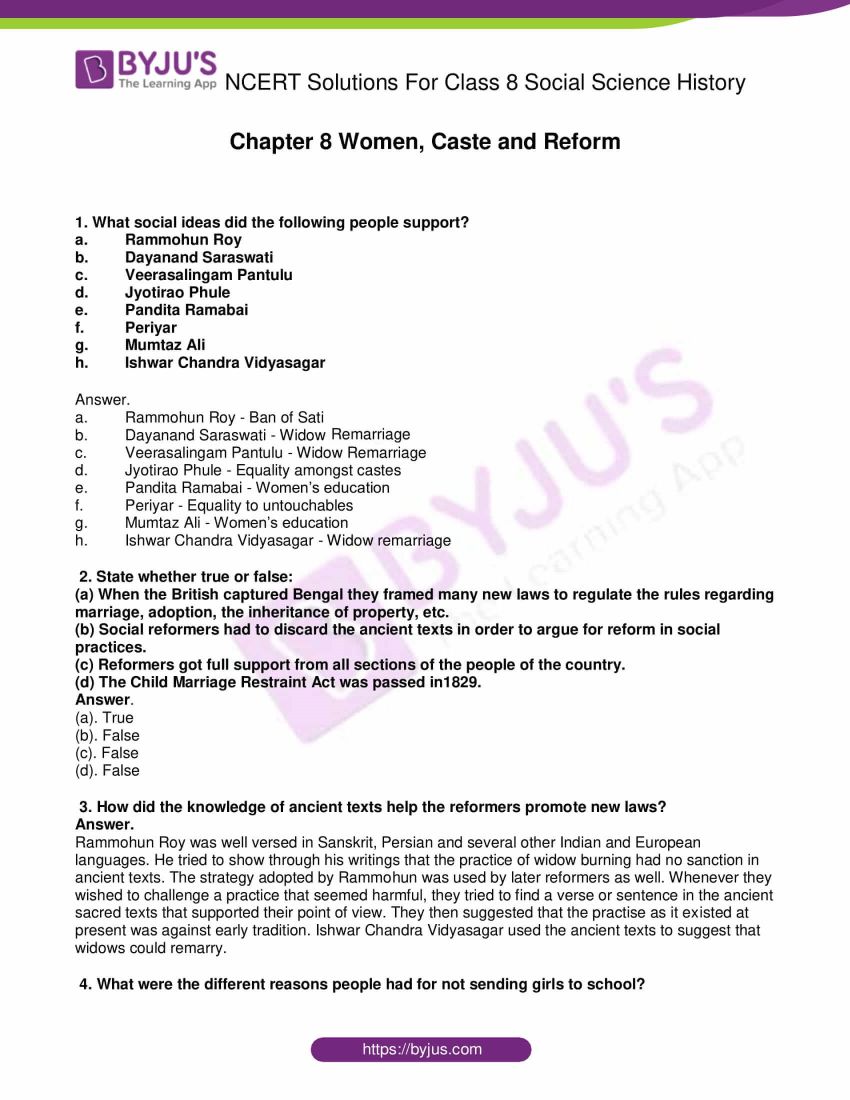 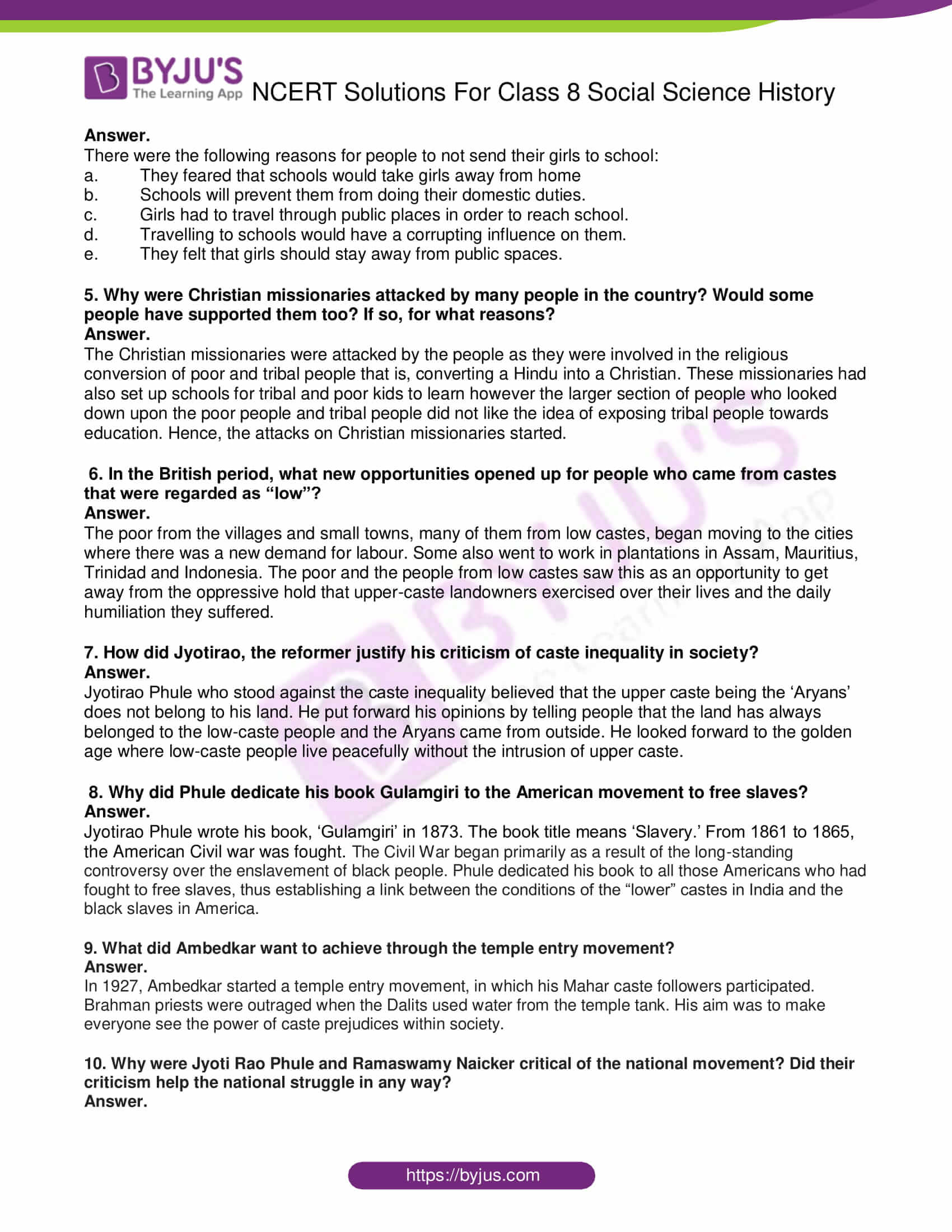 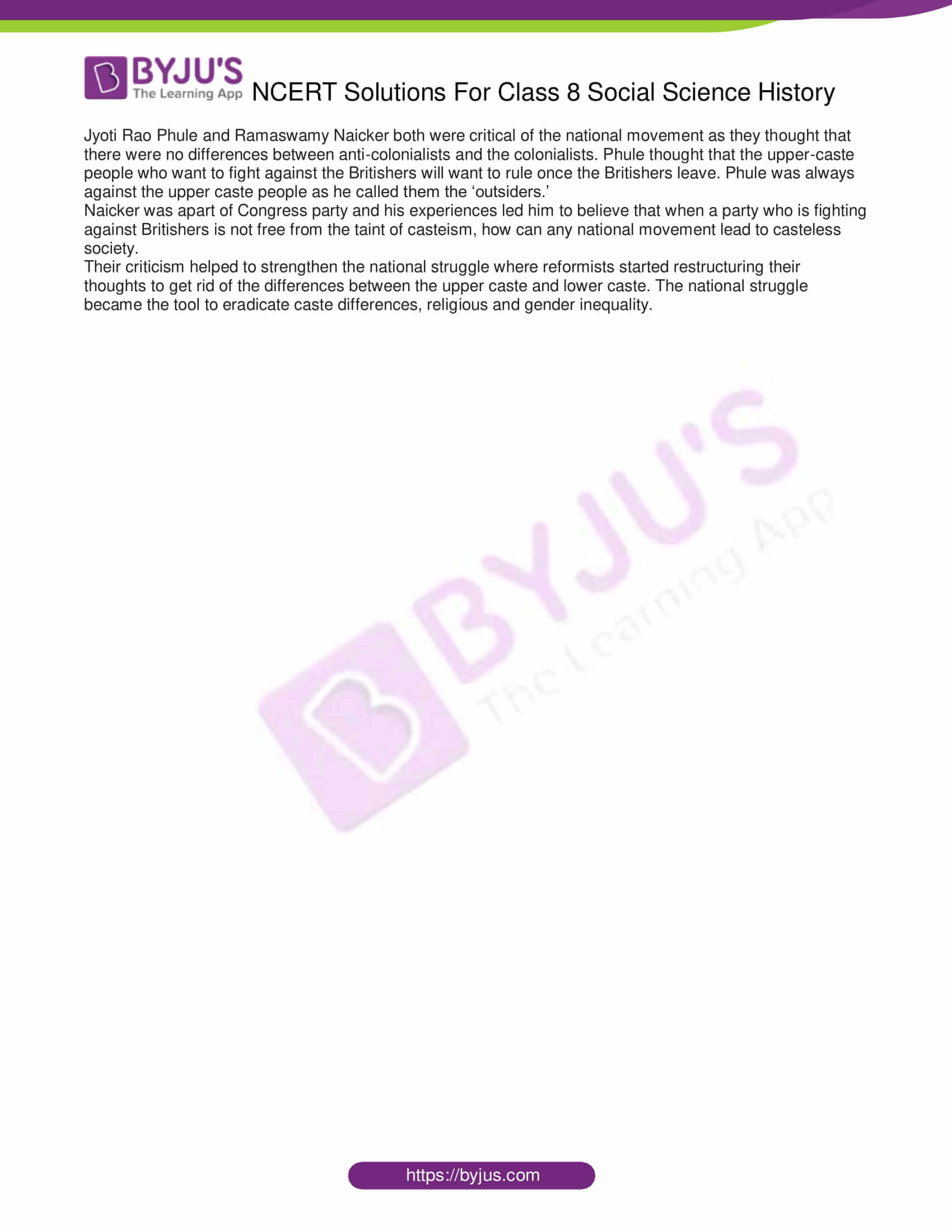 The solutions for Chapter 8 of Our Pasts-III are given below. Students should also check NCERT Solutions for Class 8 for other subjects.

1. What social ideas did the following people support?

a. Rammohun Roy – Ban of Sati

(a) When the British captured Bengal they framed many new laws to regulate the rules regarding marriage, adoption, the inheritance of property, etc.

(b) Social reformers had to discard the ancient texts in order to argue for reform in social practices.

(c) Reformers got full support from all sections of the people of the country.

(d) The Child Marriage Restraint Act was passed in1829.

3. How did the knowledge of ancient texts help the reformers promote new laws?

Ram Mohan Roy was well versed in Sanskrit, Persian and several other Indian and European languages. He tried to show through his writings that the practice of widow burning had no sanction in ancient texts. The strategy adopted by Ram Mohan Roy was used by later reformers as well. Whenever they wished to challenge a practice that seemed harmful, they tried to find a verse or sentence in the ancient sacred texts that supported their point of view. They then suggested that the practice, as it existed at present, was against early tradition. Ishwar Chandra Vidyasagar used the ancient texts to suggest that widows could remarry.

4. What were the different reasons people had for not sending girls to school?

There were the following reasons for people to not send their girls to school:

a. They feared that schools would take girls away from home.

b. Schools will prevent them from doing their domestic duties.

c. Girls had to travel through public places in order to reach school.

d. Travelling to schools would have a corrupting influence on them.

e. They felt that girls should stay away from public spaces.

5. Why were Christian missionaries attacked by many people in the country? Would some people have supported them too? If so, for what reasons?

6. In the British period, what new opportunities opened up for people who came from castes that were regarded as “low”?

The poor from the villages and small towns, many of them from low castes, began moving to the cities where there was a new demand for labour. Some also went to work in plantations in Assam, Mauritius, Trinidad and Indonesia. The poor and the people from low castes saw this as an opportunity to get away from the oppressive hold that upper-caste landowners exercised over their lives and the daily humiliation they suffered.

7. How did Jyotirao, the reformer justify his criticism of caste inequality in society?

Jyotirao Phule, who stood against caste inequality, believed that the upper castes being ‘Aryans’, are not the original inhabitants of their lands. He put forward his opinions by telling people that the land has always belonged to the lower-caste people and that the Aryans were outsiders. He looked forward to the golden age when lower-caste people would live peacefully without the intrusion of upper castes.

8. Why did Phule dedicate his book Gulamgiri to the American movement to free slaves?

Jyotirao Phule wrote his book, ‘Gulamgiri’ in 1873. The title of the book means ‘Slavery.’ From 1861 to 1865, the American Civil war was being fought. The Civil War began primarily as a result of the long-standing controversy over the enslavement of black people. Phule dedicated his book to all those Americans who had fought to free slaves, thus establishing a link between the conditions of the “lower” castes in India and the black slaves in America.

9. What did Ambedkar want to achieve through the temple entry movement?

In 1927, Ambedkar started a temple entry movement, in which his Mahar caste followers participated. Brahman priests were outraged when the Dalits used water from the temple tank. His aim was to make everyone see the power of caste prejudices within society.

10. Why were Jyoti Rao Phule and Ramaswamy Naicker critical of the national movement? Did their criticism help the national struggle in any way?

Jyoti Rao Phule and Ramaswamy Naicker both were critical of the national movement, as they thought that there were no differences between anti-colonialists and the colonialists. Phule thought that the upper-caste people who wanted to fight against the Britishers will want to rule once the Britishers leave. Phule was always against the upper caste people as he called them the ‘outsiders.’

Naicker was a part of the Congress party, and his experiences led him to believe that the party was not free from the taint of casteism. So, he was reluctant to take part in the anti-British national movement that was not concerned about creating a caste-less society.

Chapter 8 of NCERT Our Pasts-III deals with reforms in favour of women, anti-casteism and other related topics. The nature and history of gender inequality in Indian society are discussed in the chapter. Students will read about the historical plight of widows in India, illiteracy among girl children and the desperate conditions of the lower caste people. The role of social reformists like Raja Ram Mohan Roy, Jyotirao Phule and others are discussed.

Is Chapter 8 of NCERT Solutions for Class 8 History important from the examination perspective?

All chapters in the NCERT Solutions for Class 8 History are evenly important for the Class 8 exam. Hence, if students opt to skip preparations for any chapter, they might score low marks in the exam. Thus, a student must have a solid study plan allocating equal time for all the chapters. Further, students can access the NCERT Solutions of BYJU’S while answering the textbook questions. All the solutions are available in both offline and online modes to boost exam preparation of the students.

List out the main topics important in Chapter 8 of NCERT Solutions for Class 8 History.

The main topics that are important in Chapter 8 of NCERT Solutions for Class 8 History are –
1) Working Towards Change
a. Changing the lives of widows
b. Girls begin going to school
c. Women write about women
2) Caste and Social Reform
a. Demands for equality and justice
b. Gulamgiri
c. Who could enter temples?
d. The Non-Brahman movement

What are the merits of using the NCERT Solutions for Class 8 History Chapter 8?

The merits of using the NCERT Solutions for Class 8 History Chapter 8 are –
1. All the fundamentals and complex topics are explained in simple language.
2. Subject experts have created the solutions carefully according to the latest CBSE guidelines.
3. Relevant diagrams are given wherever required to aid students to understand concepts effectively.
4. Provide accurate answers to all the textbook questions present in the textbook.
5. The solutions PDF help students during their revisions.