NCERT Solutions for Class 8 History Chapter 4 – Tribals, Dikus and the Vision of a Golden Age contains the solutions to the exercises given in the History book – Our Pasts-III. NCERT Solutions to the exercises are provided, which will be useful for school exams, as they are sourced from the NCERT textbooks. The NCERT solutions are easy and accurate, which will align school students’ preparation with questions asked in the examination.

Chapter 4 Tribals Dikus And The Vision Of A Golden Age

NCERT Solutions for Class 8 History (Our Pasts-III) Chapter 4 Tribals, Dikus and the Vision of a Golden Age 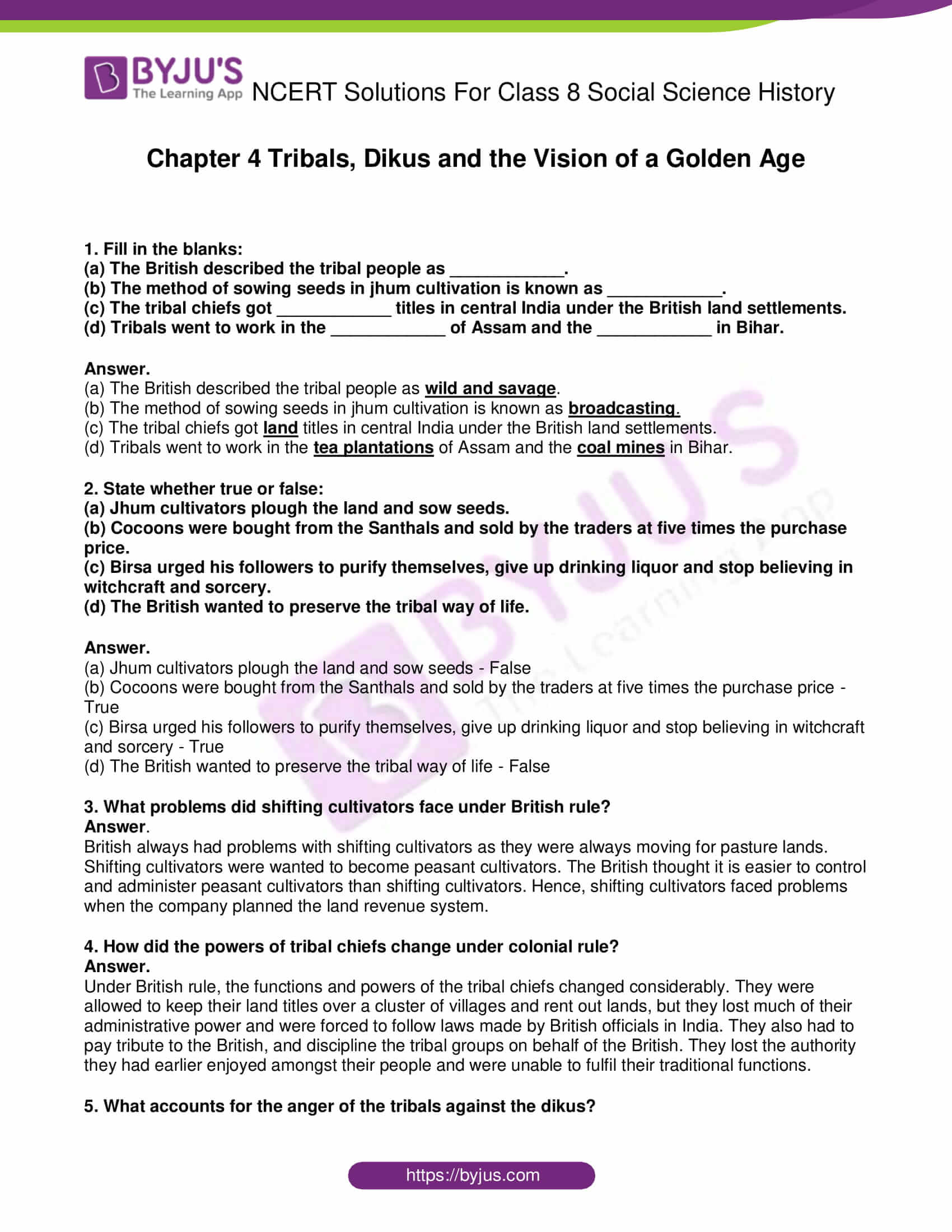 NCERT Solutions for Class 8 History Chapter 4 – Tribals, Dikus and the Vision of a Golden Age

The solutions for Chapter 4 of Our Pasts-III are given below. Students should also check NCERT Solutions for Class 8 for other subjects.

(c) The tribal chiefs got ____________ titles in central India under the British land settlements.

(a) The British described the tribal people as wild and savage.

(b) The method of sowing seeds in jhum cultivation is known as broadcasting.

(c) The tribal chiefs got land titles in central India under the British land settlements.

(d) Tribals went to work in the tea plantations of Assam and the coal mines in Bihar.

(a) Jhum cultivators plough the land and sow seeds.

(b) Cocoons were bought from the Santhals and sold by the traders at five times the purchase price.

(c) Birsa urged his followers to purify themselves, give up drinking liquor and stop believing in witchcraft and sorcery.

(d) The British wanted to preserve the tribal way of life.

(a) Jhum cultivators plough the land and sow seeds – False

(c) Birsa urged his followers to purify themselves, give up drinking liquor and stop believing in witchcraft and sorcery – True

3. What problems did shifting cultivators face under British rule?

4. How did the powers of tribal chiefs change under colonial rule?

Under British rule, the functions and powers of the tribal chiefs changed considerably. They were allowed to keep their land titles over a cluster of villages and rent outlands, but they lost much of their administrative power and were forced to follow laws made by the British officials in India. They also had to pay tribute to the British, and discipline the tribal groups on behalf of the British. They lost the authority that they had earlier enjoyed among their people and were unable to fulfil their traditional functions.

5. What accounts for the anger of the tribals against the dikus?

Tribals were not happy with dikus who were considered as ‘outsiders’ by them. Tribals wanted to be shifting cultivators and not be peasant cultivators. The dikus were settling in at the tribals’ lands, wanting the latter to sell their lands or rent their lands at very high-interest rates. This made the tribals unhappy. Also, the tribal chiefs lost their administrative powers under British rule. Later, the tribals were evacuated from their lands, and they had to look for other livelihood options.

6. What was Birsa’s vision of a golden age? Why do you think such a vision appealed to the people of the region?

Birsa’s vision of golden age was to have their land free of dikus. He considered that age to be the ‘age of truth’. According to Birsa, in the golden age, the tribal sirdars will be able to rule among themselves and no one will be there to dictate terms to them. His golden age vision was to have an age with no vices like liquor, witchcraft, sorcery and uncleanliness. He did not want any role of outsider participants like missionaries, Hindu landlords, moneylenders, traders and Europeans.

Tribals, Dikus and the Vision of a Golden Age Summary

Chapter 4 of Our Pasts-III deals with different categories of people like tribals, shifting cultivators and herders. Class 8 Chapter 4 talk about how the tribals faced problems with the advent of money lenders, traders and Europeans who they considered as ‘Dikus.’ The chapter will also talk about a tribal leader called Birsa Munda, who led a revolt against the dikus, to free the tribal land from their clutches.

a. Some were jhum cultivators

b. Some were hunters and gatherers

d. Some took to settled cultivation

a. What happened to tribal chiefs?

b. What happened to the shifting cultivators?

c. Forest laws and their impact

d. The problem with trade

e. The search for work