NCERT Solutions for Class 8 History Chapter 9 – The Making of the National Movement: 1870s –1947 are provided here. To cover the entire syllabus in History, the NCERT is an essential material as it offers a wide range of questions that test the students understanding of concepts. Our expert personnel have answered the questions with neat explanations. Students who aspire to score good marks, then refer to NCERT Solutions for Class 8 History.

Expert tutors have designed the NCERT Solutions for Class 8 History with utmost care, where students can secure good marks in academics by practicing all the questions and cross-checking with the NCERT Syllabus.

NCERT Solutions for Class 8 History (Our Pasts-III) Chapter 9 The Making of the National Movement: 1870s–1947 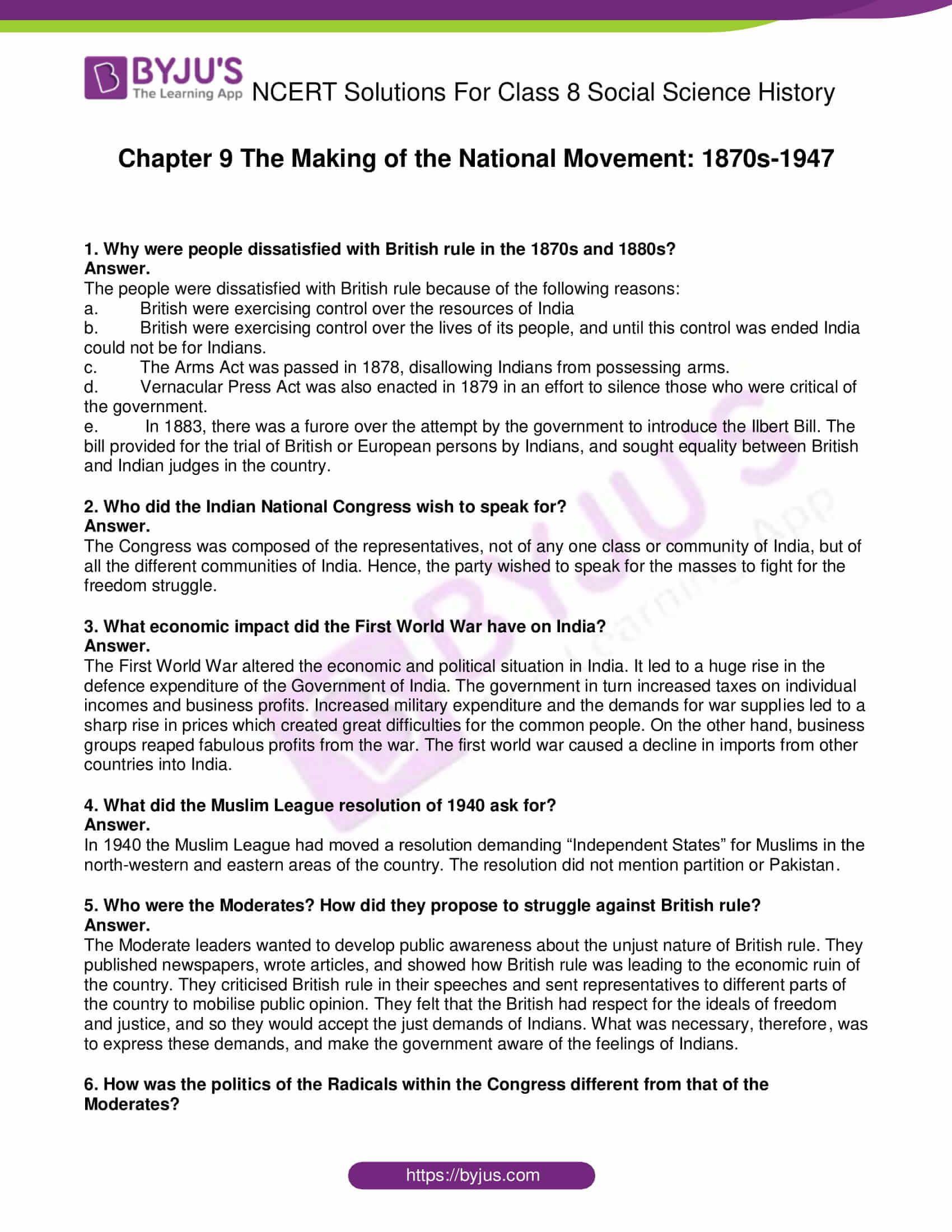 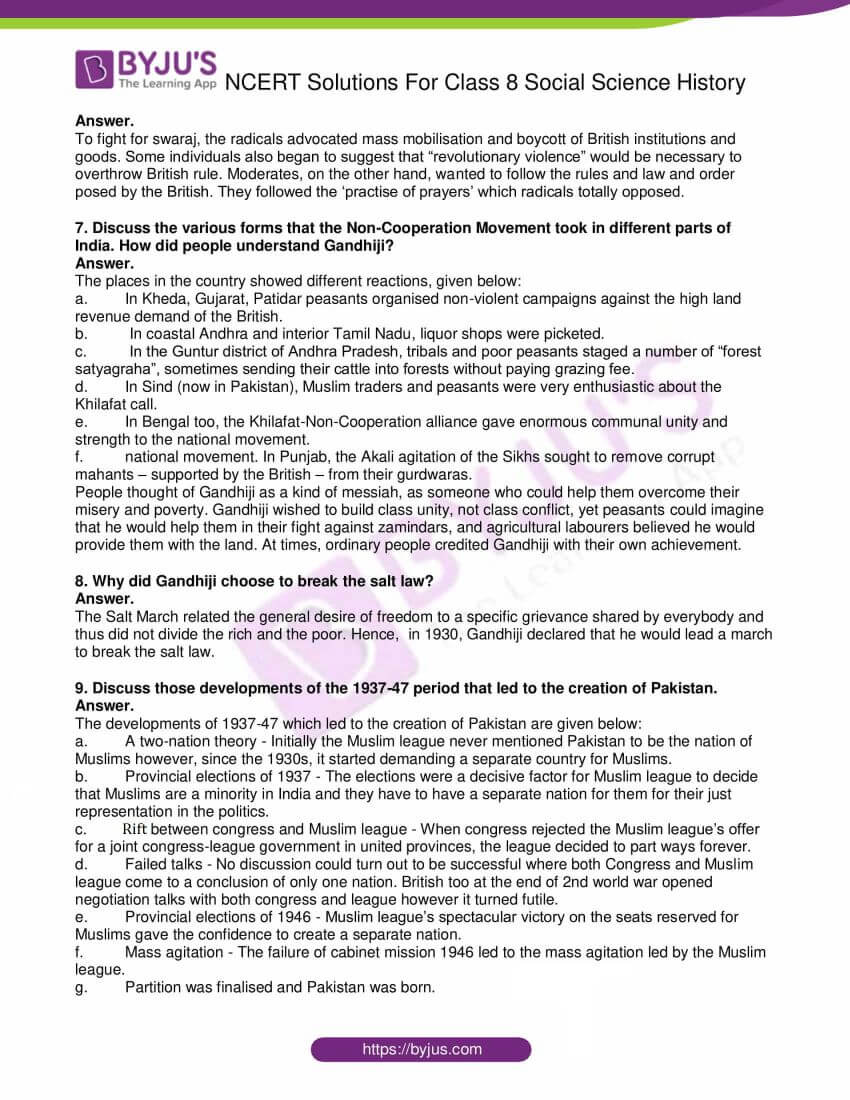 NCERT Solutions for Class 8 History Chapter 9 – The Making of the National Movement: 1870s–1947

The solutions for Chapter 9 of Our Pasts-III are given below. Students should also check NCERT Solutions for Class 8 for other subjects.

The people were dissatisfied with British rule because of the following reasons:

a. British were exercising control over the resources of India

b. British were exercising control over the lives of its people and until this control ended, India could not be for Indians.

c. The Arms Act was passed in 1878, disallowing Indians from possessing arms.

d. Vernacular Press Act was also enacted in 1879, in an effort to silence those who were critical of the government.

e. In 1883, there was a furor over the attempt by the government to introduce the Ilbert Bill. The bill provided for the trial of British or European persons by Indians, and sought equality between British and Indian judges in the country.

2. Who did the Indian National Congress wish to speak for?

The Congress was composed of the representatives, not of any one class or community of India, but of all the different communities of India. Hence, the party wished to speak for the masses in the fight for freedom.

3. What economic impact did the First World War have on India?

The First World War altered the economic and political situation in India. It led to a huge rise in the defence expenditure of the Government of India. The government, in turn, increased taxes on individual incomes and business profits. Increased military expenditure and the demands for war supplies led to a sharp rise in prices, which created great difficulties for the common people. On the other hand, business groups reaped fabulous profits from the war. The first world war caused a decline in imports from other countries into India.

4. What did the Muslim League resolution of 1940 ask for?

In 1940 the Muslim League had moved a resolution demanding “Independent States” for Muslims in the north-western and eastern areas of the country. The resolution did not mention partition or Pakistan.

5. Who were the Moderates? How did they propose to struggle against British rule?

The Moderate leaders wanted to develop public awareness about the unjust nature of British rule. They published newspapers, wrote articles and showed how British rule was leading to the economic ruin of the country. They criticised British rule in their speeches and sent representatives to different parts of the country to mobilise public support. They felt that the British had respect for the ideals of freedom and justice and so would accept the just demands of Indians. What was necessary, therefore, was to express these demands and make the government aware of the feelings of Indians.

6. How was the politics of the Radicals within the Congress different from that of the Moderates?

In the fight for swaraj, the radicals advocated mass mobilisation and boycott of British institutions and goods. Some individuals also began to suggest that “revolutionary violence” would be necessary to overthrow British rule. Moderates, on the other hand, wanted to follow the rules, the laws and the order posed by the British. They followed the ‘practise of prayers’ which the radicals totally opposed.

7. Discuss the various forms that the Non-Cooperation Movement took in different parts of India. How did people understand Gandhiji?

Different places in the country showed different reactions, given below:

a. At Kheda in Gujarat, Patidar peasants organised nonviolent campaigns against the high land revenue demand of the British.

b. In coastal Andhra and interior Tamil Nadu, liquor shops were picketed.

c. In the Guntur district of Andhra Pradesh, tribals and poor peasants staged a number of “forest satyagraha”, sometimes sending their cattle into forests without paying grazing fee.

d. In Sind (now in Pakistan), Muslim traders and peasants were very enthusiastic about the Khilafat call.

e. In Bengal too, the Khilafat-Non-Cooperation alliance gave enormous communal unity and strength to the national movement.

f. In Punjab, the Akali agitation of the Sikhs sought to remove corrupt mahants – supported by the British – from their gurdwaras.

People thought of Gandhiji as a kind of messiah, as someone who could help them overcome their misery and poverty. Gandhiji wished to build class unity and not class conflict. Yet, peasants could imagine that he would help them in their fight against zamindars, and agricultural labourers believed he would provide them with the land. At times, ordinary people credited Gandhiji with their own achievement.

8. Why did Gandhiji choose to break the salt law?

The Salt March related the general desire of freedom to a specific grievance shared by everybody and thus did not divide the rich and the poor. Hence, in 1930, Gandhiji declared that he would lead a march to break the salt law.

9. Discuss those developments of the 1937-47 period that led to the creation of Pakistan.

The developments of 1937-47, which led to the creation of Pakistan, are given below:

a. A two-nation theory – Initially the Muslim league never mentioned Pakistan to be the nation of Muslims however; since the 1930s, it started demanding a separate country for Muslims.

b. Provincial elections of 1937 – The elections were a decisive factor for Muslim league to decide that Muslims are a minority in India and they have to have a separate nation for them for their just representation in the politics.

c. Rift between congress and Muslim league – When congress rejected the Muslim league’s offer for a joint congress-league government in united provinces, the league decided to part ways forever.

d. Failed talks – No discussion could turn out to be successful, where both Congress and Muslim league could come to a conclusion of a single nation. British too, at the end of 2nd world war, opened negotiation talks with both congress and the league. However, it turned futile.

e. Provincial elections of 1946 – Muslim league’s spectacular victory on the seats reserved for Muslims gave them the confidence to create a separate nation.

f. Mass agitation – The failure of cabinet mission of 1946 led to the mass agitation led by the Muslim league.

g. Partition was finalised and Pakistan was born.

Chapter 9 of NCERT Our Pasts-III deals with the emergence of nationalism. The nationalists’ consciousness began to be clearly stated by the political associations formed after 1850, especially those that came into being in the 1870s and 1880s. Students will read about the role of Congress in the freedom struggle, how the 1st and 2nd world wars impacted the Indian freedom struggle, discussion on how the struggle took the form of satyagrahas and agitation. Mahatma Gandhi’s involvement in the struggle and the Dandi march is also discussed in Chapter 9 of Our Pasts-III. The birth of the Muslim league and the demand for Pakistan in the later stage will also be discussed.

‘Our Pasts-III’ is an important book for Class 8 Social Science subject. Apart from this chapter, solutions for the full set of NCERT Solutions for Class 8 Social Science is given in the links. Students who aim to score top scores in the main examinations, then refer to the NCERT Solutions and can download the solutions pdf for free from the links given.

What are the key developments of the 1937-47 period that led to the creation of Pakistan as mentioned in Chapter 9 of NCERT Solutions for Class 8 History?

Mention the topics/subtopics that are covered in Chapter 9 of NCERT Solutions for Class 8 History.

The topics/subtopics covered in Chapter 9 of NCERT Solutions for Class 8 History are:
1) The Emergence of Nationalism
a. A nation in the making
b. “Freedom is our birthright”
2) The Growth of Mass Nationalism
a. The advent of Mahatma Gandhi
b. The Rowlatt Satyagraha
c. Khilafat agitation and the Non-Cooperation Movement
d. People’s initiatives
e. The people’s Mahatma
f. The happenings of 1922-1929
3) The March to Dandi
4) Quit India and Later
a. Towards Independence and Partition

Are the NCERT Solutions for Class 8 History Chapter 9 from BYJU’S ample for students to prepare for their exams?

The NCERT Solutions for Class 8 History Chapter 9 from BYJU’S are created by subject experts having vast experience teaching the subject. All the topics are explained in a simple and easy to understand language to help students grasp them quicker. Tables and charts are used wherever needed to boost the exam preparation of students. Pointers/bulletins are used for a neat presentation of the answer and help students learn them effortlessly. By using the NCERT Solutions from BYJU’S regularly students can also improve their confidence in attempting various competitive exams like UPSC, NTSE, JEE, NEET etc.