Marchantia is a genus of bryophytes. They are liverworts and found in moist and shady places. They lack true roots, stem and leaves. The plant body is thalloid.

Bryophytes are known as the amphibians of the plant kingdom as they require water to reproduce sexually and complete their life cycle.

Marchantia reproduce asexually as well as sexually. The life cycle is haplodiplontic and the haploid gametophyte is the dominant phase. The diploid sporophyte is short-lived and dependent on the gametophyte.

Marchantia is classified under division Hepaticophyta, which includes all the liverworts. Riccia is also a liverwort. Bryophyta is divided into three main classes:

The genus Marchantia contains around 65 species. They are present in moist and shady places all over the world. Some of the examples are:

Asexual reproduction in Marchantia is by fragmentation or by forming specialised structures known as gemmae.

They reproduce asexually by gemmae, which are asexual buds. They are formed in the receptacles known as gemma cups. Gemma cups are present on the dorsal surface, near the midrib of the gametophytic thalli. Gemmae are multicellular and green.

Gemmae detach from the parent plant and germinate to give rise to the new plant.

The archegonium is a flask-shaped structure. It consists of several neck canal cells, a ventral canal cell and an egg.

They need water for fertilization like other bryophytes. The neck canal cells and the ventral canal cell disintegrate and form a mucilaginous mass, which oozes out as the archegonia swells after absorbing water. It consists of chemical substances, which triggers the chemotactic response. The antherozoids get attracted and swim towards archegonia. One of the antherozoids fuses with egg and fertilization takes place. The male and female nuclei fuse together to form a diploid cell called the zygote.

The diploid zygote does not undergo meiosis (reduction division) immediately. It rather divides mitotically and develops into a multicellular structure called the sporophyte. The sporophyte is differentiated into foot, seta and capsule. It is not the free-living stage, it is dependent on the gametophyte for nourishment.

These haploid spores are released by the dehiscence of the capsule. Under favourable conditions, they germinate to form the new haploid plant or gametophyte. 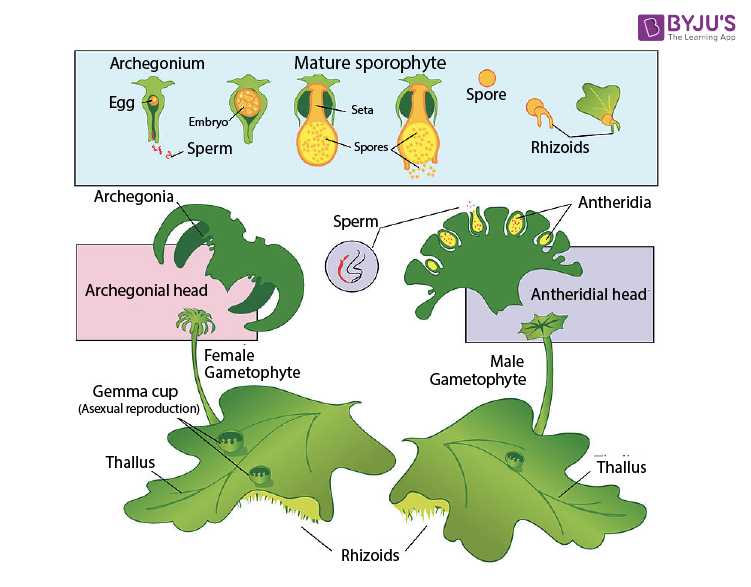 Marchantia show alternation of generation, i.e. the haploid sexual and diploid asexual phase alternates. The life cycle of Marchantia is haplodiplontic. Both the haploid and diploid phases are represented by multicellular structures.

This was all about Marchantia. For more such topics related to NEET, visit BYJU’S. Check NEET Biology Flashcards for the revision of important concepts.

Is marchantia a bryophyte?

Yes, Marchantia is a bryophyte. It is a type of liverworts. Marchantia belongs to the family Marchantiaceae and the order Marchantiales.

How many types of Rhizoids are seen in marchantia?

Rhizoids are the root-like unicellular structure present in non-vascular plants that help in anchoring the plant. Marchantia polymorpha has two types of rhizoids tuberculate rhizoids and smooth-walled rhizoids.

Why is marchantia called liverworts?

The term ‘liverworts’ means liver-like small plant. Marchantia is called liverworts due to the resemblance of its thallus to the liver.

What are the 3 types of bryophytes?

Bryophytes are non-vascular plants. They are divided into three types: liverworts, hornworts and mosses.

What is Gemmae in marchantia?

Marchantia reproduces asexually by gemmae, which are asexual buds. They are formed in the receptacles known as gemma cups. Gemma cups are present on the dorsal surface, near the midrib of the gametophytic thalli. Gemmae are multicellular, green and haploid tissue. Gemmae detach from the parent plant and germinate to give rise to the gametophyte.

Test your Knowledge on Marchantia!
Q5