AP Board Class 10 Science Paper I 2016 Question Paper with solutions is the best resource for students who practise hard to score high in the board exams. This Class 10 exam question paper is useful for the students, as it helps them to perform well in the Science exams. With just a click, students can now download the PDF formats of the solved or the unsolved question paper, as per their preference. These clickable links that are listed below in this article are considered as a very helpful resource to prepare effectively for the exams.

Also, for students who are aspiring to achieve good scores in Science, mastering all the complex concepts related to the subject seems the best possible solution. Students can easily ace the AP Board Class 10 Science Paper I exam, if they have learned the complex formulas and equations of the subject, thoroughly. Students are advised to revise the entire subject before the exam and solve the previous papers of AP Board Class 10 Science Part I. Solving these papers is the best way to get an idea about the exam pattern and help the students become more familiar with the various question types that are normally repeated for board exams. Students will also be able to gauge the difficulty level of the exams from these AP SSC question paper solutions. This will help them to scale their exam preparations. 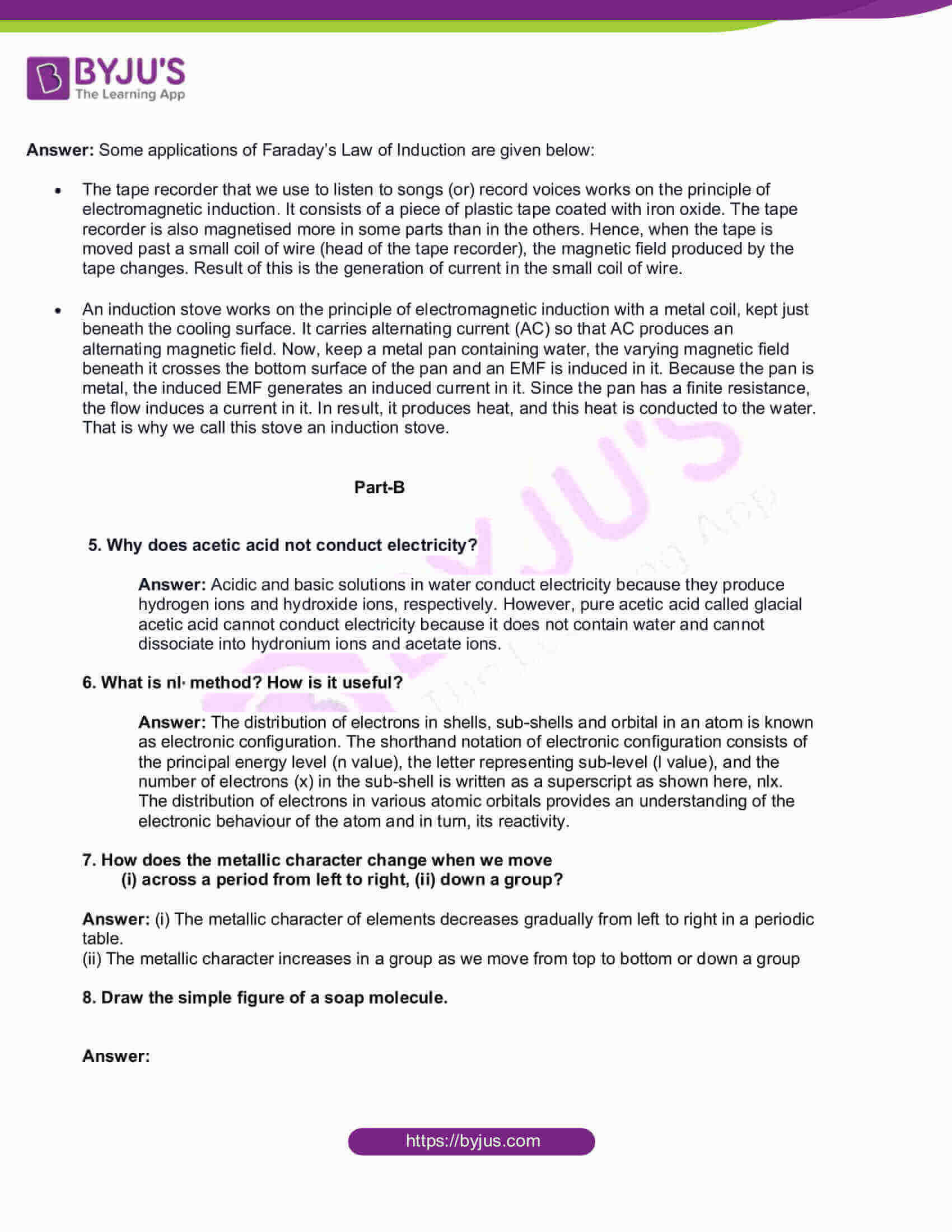 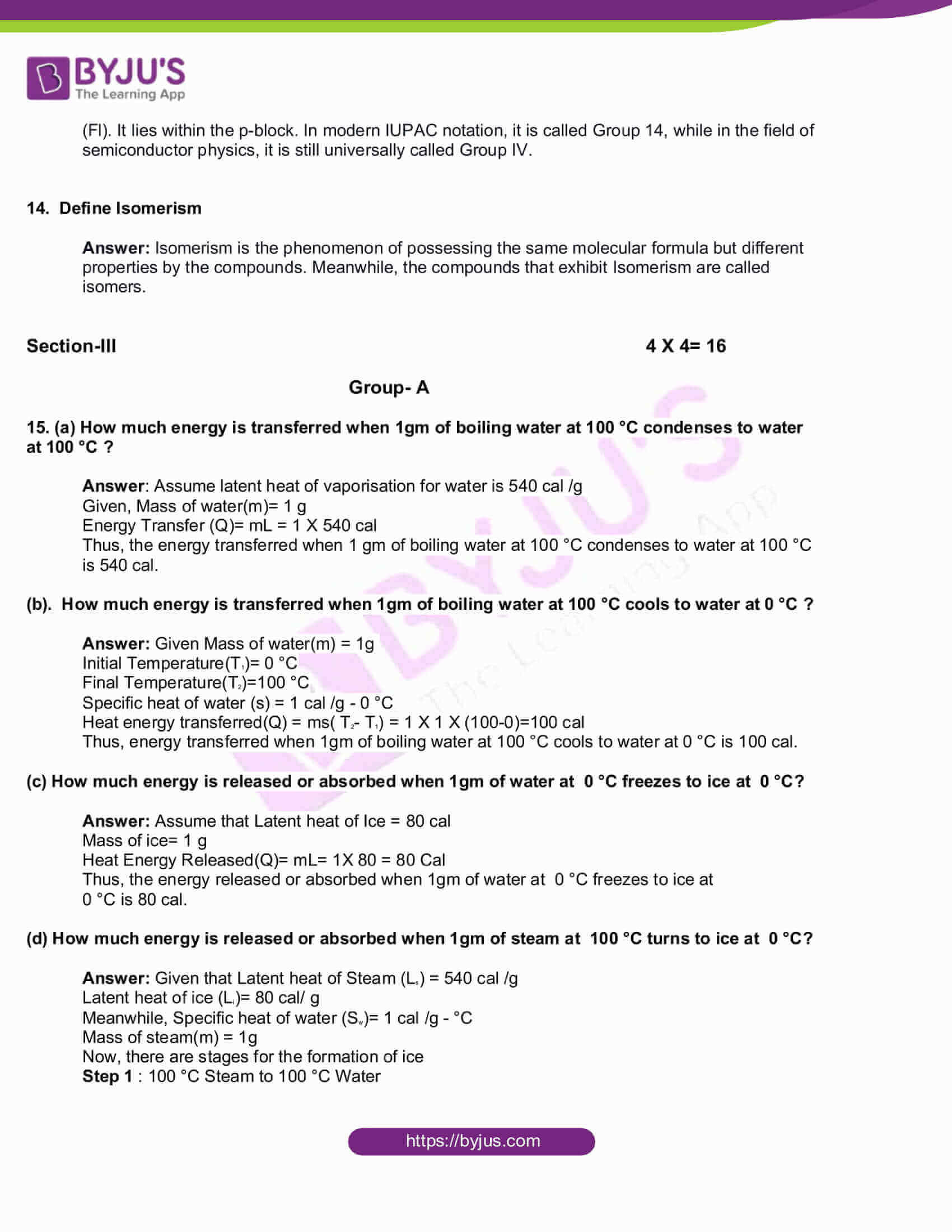 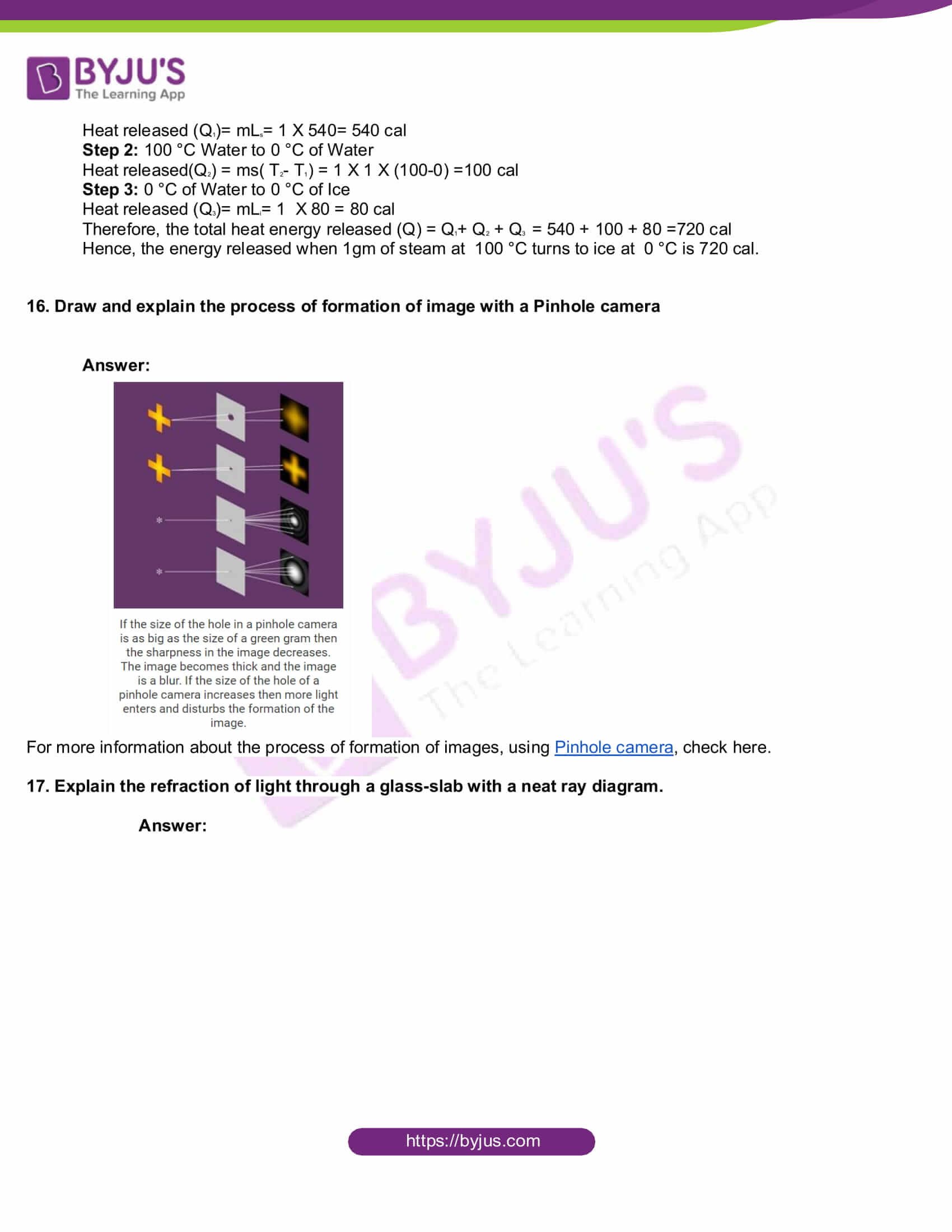 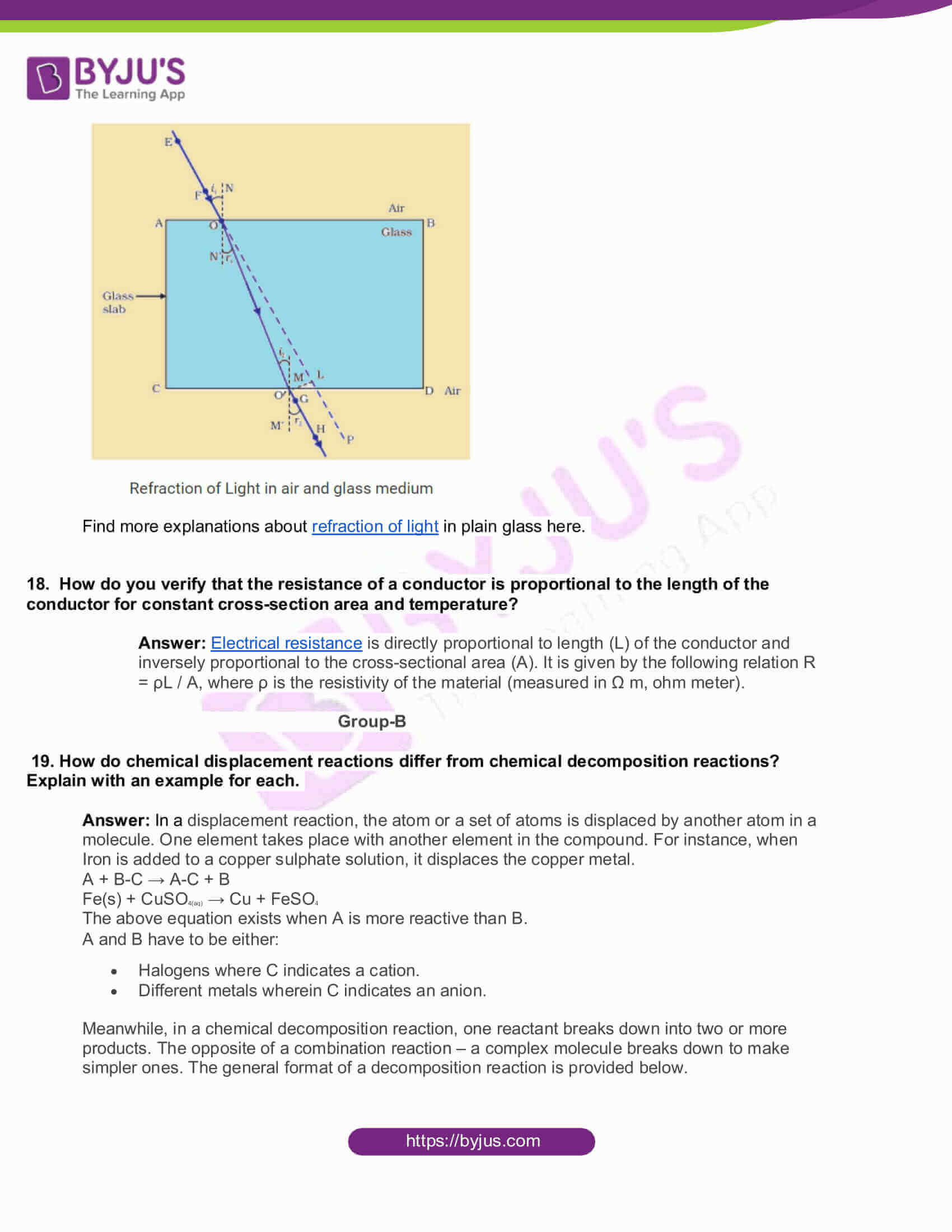 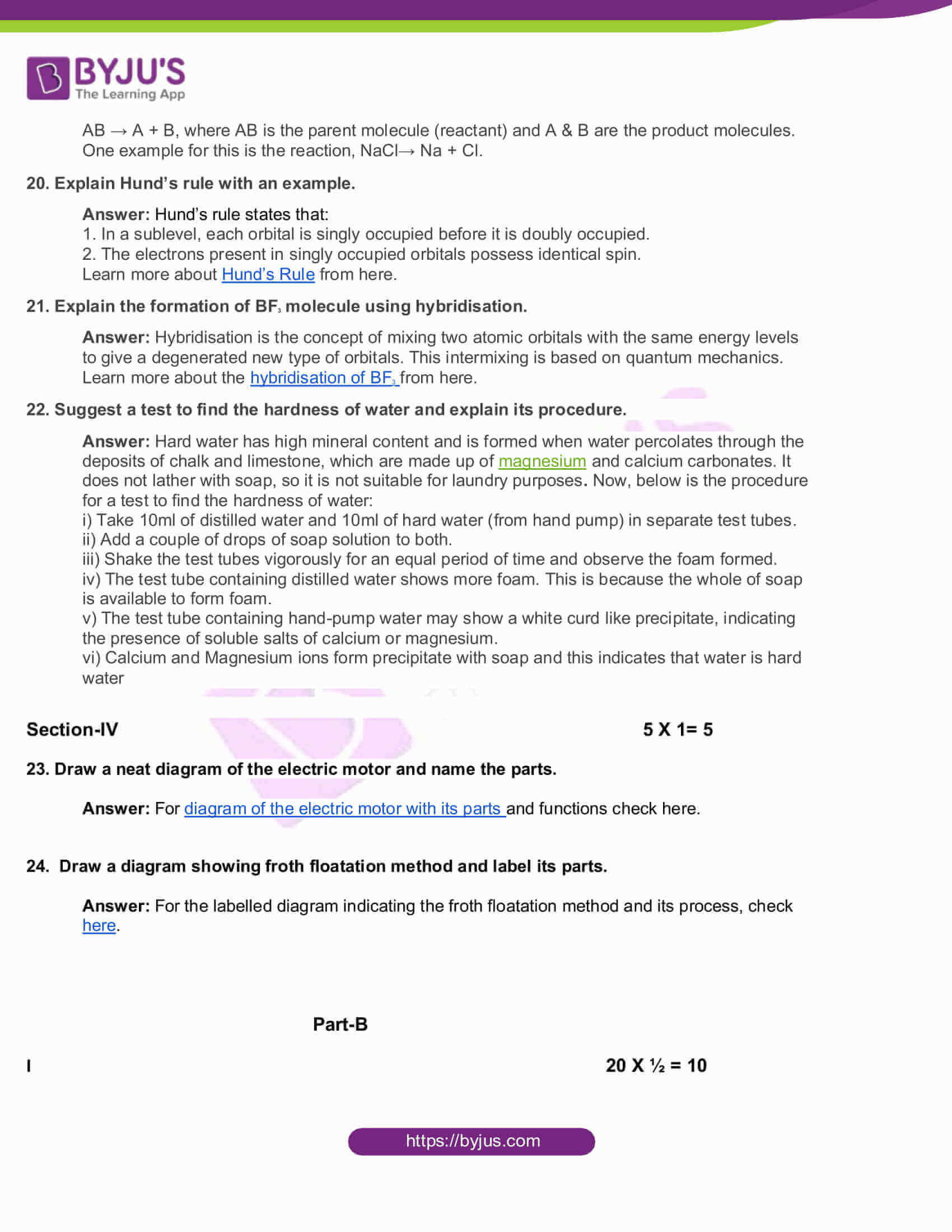 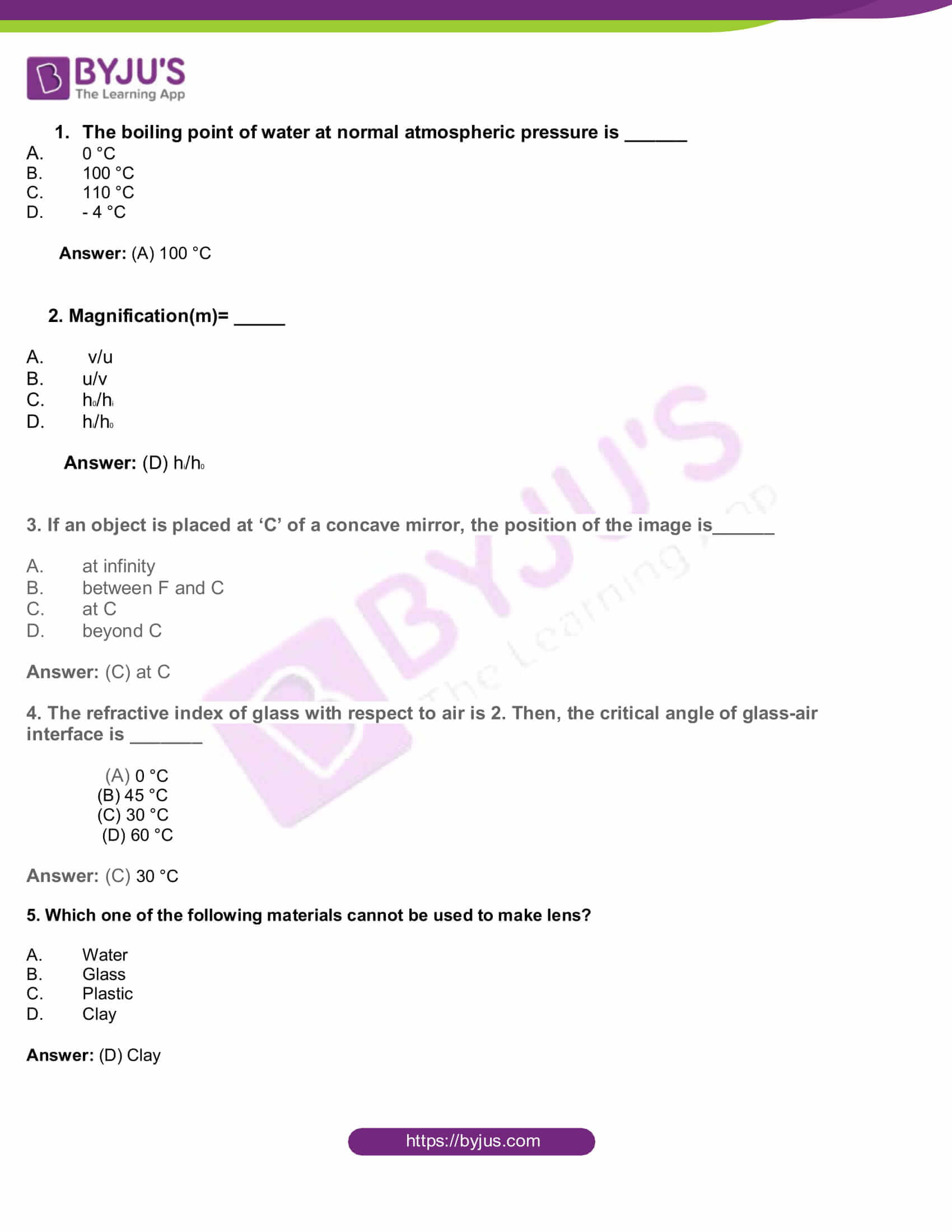 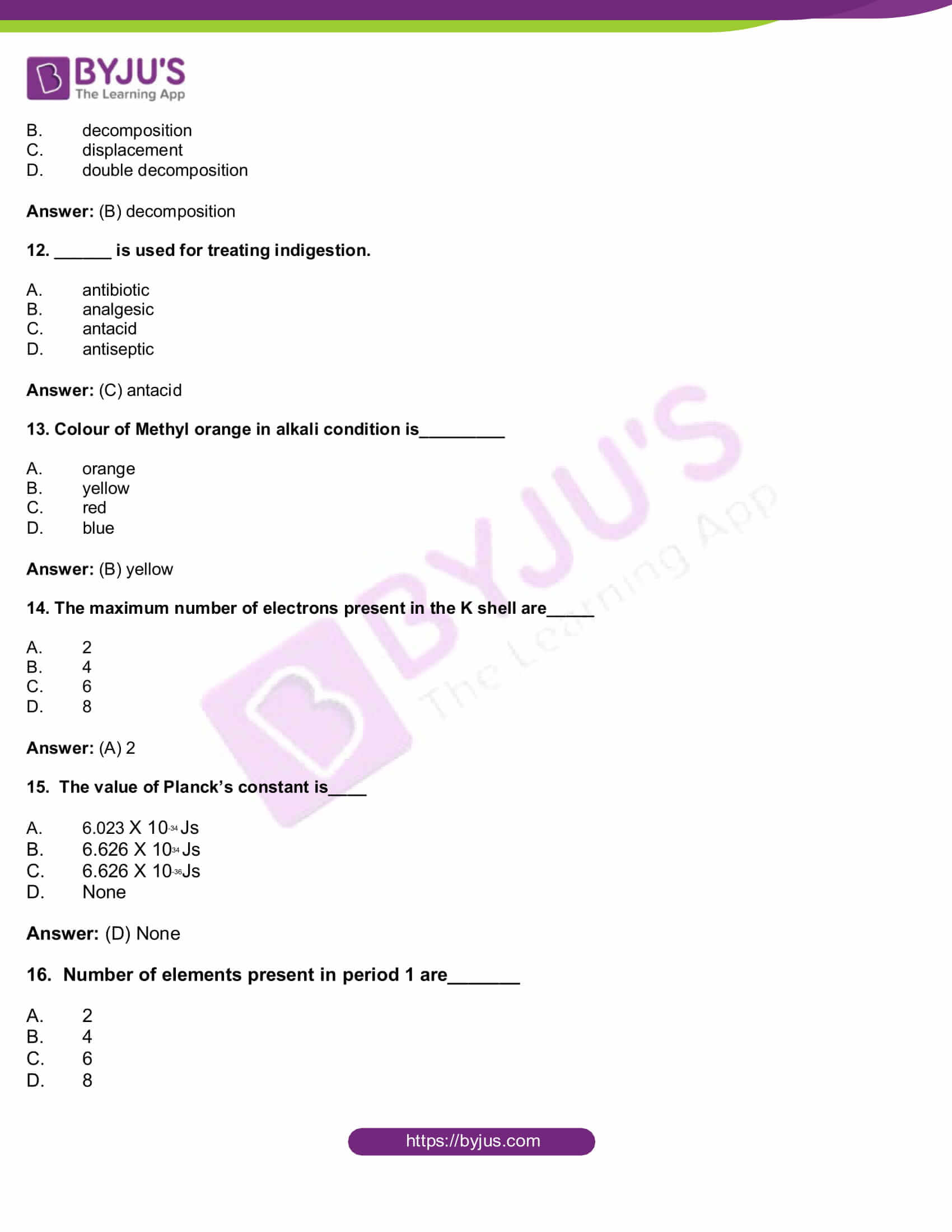 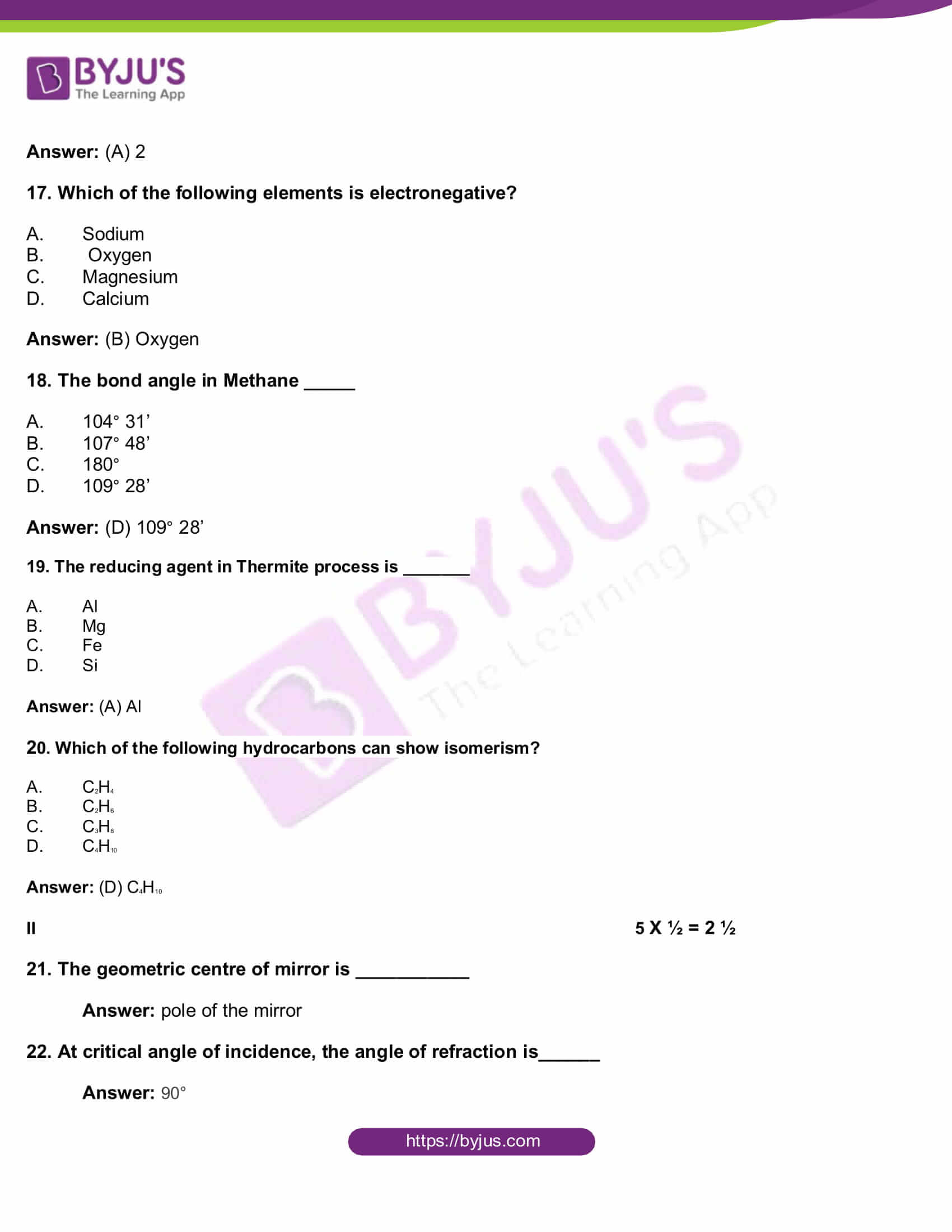 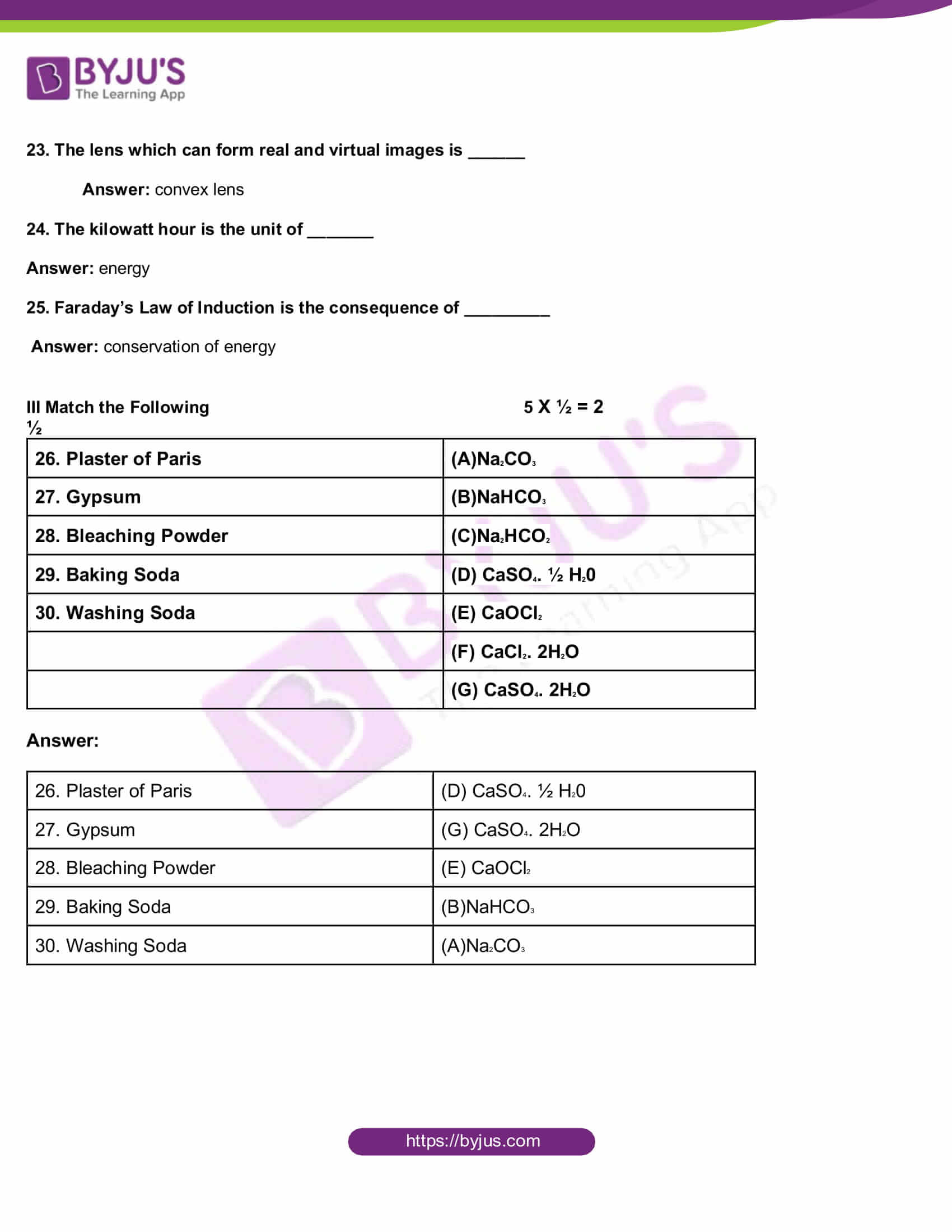 Answer: If a light ray does not deviate at the interface of two media the two possibilities are:

2. What happens to the water molecules, when the wet clothes are dried up?

3. Explain the reason for the blue colour of the sky briefly.

Answer: Light of particular frequency falls on a free atom or molecule in space. This atom or molecule responds to the light, whenever the size of the atom or molecule is comparable to the wavelength of light. If this condition is satisfied, the atom absorbs light and vibrates. Due to these vibrations, the atom re-emits a certain fraction of absorbed energy in all directions with different intensities. The re-emitted light is called scattered light, and the process of re-emission of light in all directions with different intensity is called scattering of light. Our atmosphere contains different types of molecules and atoms. According to their sizes, they can scatter different wavelengths of light. The reason for the blue sky is due to the molecules N2 and O2. The sizes of these molecules are comparable to the wavelength of blue light. These molecules act as scattering centres for the scattering of blue light.

4. Give any two applications of Faraday’s Law of Induction in daily life?

Answer: Some applications of Faraday’s Law of Induction are given below:

5. Why does acetic acid not conduct electricity?

6. What is nlx method? How is it useful?

7. How does the metallic character change when we move

(i) across a period from left to right, (ii) down a group?

Answer: (i) The metallic character of elements decreases gradually from left to right in a periodic table.

8. Draw the simple figure of a soap molecule.

9. Define the Latent heat of Fusion.

Answer: Latent heat of Fusion is the heat energy required to convert 1gm of solid ultimately into a liquid at a constant temperature.

10. What is the relationship between the focal length(f) and the radius of curvature(R)?

Answer: First, hold a concave mirror such that sunlight falls on it. Then, take a small paper and slowly move it in front of the mirror and find out the point where you get the smallest and brightest spot, which will be the image of the sun. The rays coming from the sun parallel to the principal axis of the concave mirror converge to a point called Focus or focal point (F) of the concave mirror. Measure the distance of this spot from the pole of the mirror. This distance is the focal length (f) of the mirror. Now, the radius of curvature will be twice this distance (R=2f). Thus, we can conclude that the radius of curvature(R) is equal to twice the focal length(2f).

11. What is electric shock?

Answer: The current passing through our body when we touch a live wire of 240V is given by I = 240/100000 = 0.0024A. When this quantity of current flows through the body, the functioning of organs inside the body gets disturbed. This disturbance inside the body is felt like an electric shock.

12. Why do we apply paint on iron articles?

Answer: Iron articles corrode easily when exposed to air. One of the simplest methods of preventing corrosion is to prevent the surface of the metallic object from coming in contact with the atmosphere. This can be done by covering the surface with paint. Hence, we apply paint on iron articles to prevent it from rusting.

Answer: Carbon family can be found towards the right side of the periodic table. The members of this family include carbon (C), silicon (Si), germanium (Ge), tin (Sn), lead (Pb), and flerovium (Fl). It lies within the p-block. In modern IUPAC notation, it is called Group 14, while in the field of semiconductor physics, it is still universally called Group IV.

Answer: Isomerism is the phenomenon of possessing the same molecular formula but different properties by the compounds. Meanwhile, the compounds that exhibit Isomerism are called isomers.

Thus, the energy released or absorbed when 1gm of water at 0 °C freezes to ice at

Now, there are stages for the formation of ice

16. Draw and explain the process of formation of image with a Pinhole camera For more information about the process of formation of images, using Pinhole camera, check here.

17. Explain the refraction of light through a glass-slab with a neat ray diagram. 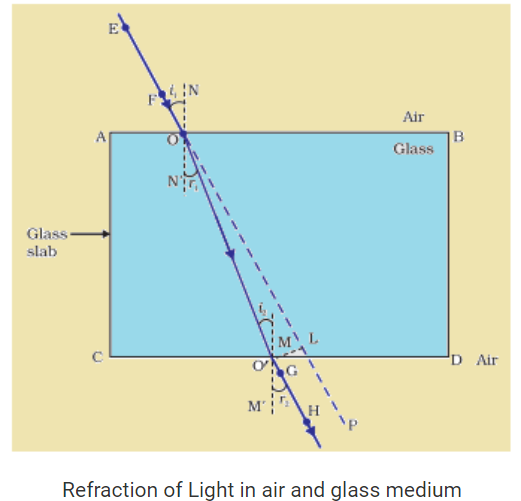 18. How do you verify that the resistance of a conductor is proportional to the length of the conductor for constant cross-section area and temperature?

Answer: Electrical resistance is directly proportional to length (L) of the conductor and inversely proportional to the cross-sectional area (A). It is given by the following relation R = ρL / A, where ρ is the resistivity of the material (measured in Ω m, ohm meter).

19. How do chemical displacement reactions differ from chemical decomposition reactions? Explain with an example for each.

Answer: In a displacement reaction, the atom or a set of atoms is displaced by another atom in a molecule. One element takes place with another element in the compound. For instance, when Iron is added to a copper sulphate solution, it displaces the copper metal.

The above equation exists when A is more reactive than B.

A and B have to be either:

AB → A + B, where AB is the parent molecule (reactant) and A & B are the product molecules. One example for this is the reaction, NaCl→ Na + Cl.

20. Explain Hund’s rule with an example.

1. In a sublevel, each orbital is singly occupied before it is doubly occupied.

Answer: Hybridisation is the concept of mixing two atomic orbitals with the same energy levels to give a degenerated new type of orbitals. This intermixing is based on quantum mechanics. Learn more about the hybridisation of BF3
from here.

22. Suggest a test to find the hardness of water and explain its procedure.

Answer: Hard water has high mineral content and is formed when water percolates through the deposits of chalk and limestone, which are made up of magnesium and calcium carbonates. It does not lather with soap, so it is not suitable for laundry purposes. Now, below is the procedure for a test to find the hardness of water:

i) Take 10ml of distilled water and 10ml of hard water (from hand pump) in separate test tubes.

ii) Add a couple of drops of soap solution to both.

iii) Shake the test tubes vigorously for an equal period of time and observe the foam formed.

iv) The test tube containing distilled water shows more foam. This is because the whole of soap is available to form foam.

v) The test tube containing hand-pump water may show a white curd like precipitate, indicating the presence of soluble salts of calcium or magnesium.

23. Draw a neat diagram of the electric motor and name the parts.

Answer: For diagram of the electric motor with its parts and functions check here.

Answer: For the labelled diagram indicating the froth floatation method and its process, check here.

1. The boiling point of water at normal atmospheric pressure is ______

4. The refractive index of glass with respect to air is 2. Then, the critical angle of glass-air interface is _______

5. Which one of the following materials cannot be used to make lens?

Answer: (D) Potential difference between A and B

14. The maximum number of electrons present in the K shell are_____

17. Which of the following elements is electronegative?

20. Which of the following hydrocarbons can show isomerism?

Answer: pole of the mirror

22. At critical angle of incidence, the angle of refraction is______