What is Froth Flotation Process?

Flotation is the process of separation of beneficial minerals from a mixture by creating froth on which minerals separate out. This method of froth floatation is a method of mineral processing in which different minerals are separated selectively. Such ores containing multiple metals such as lead, copper and zinc can be selectively extracted by using froth floatation. The minerals that do not float into the froth are called the flotation tailings or flotation tails.

The froth flotation process was first patented by H. F. K. Pickard, E. L.Sulman and John Ballot in the year 1906. This was nearly 19 years after the first cyanide process patents that were filed by MacArthur and the Forests. This process came into light while the scientists were experimenting with the Cattermole process.

The method of froth floatation can be classified into three steps:

1. True floatation – In this process minerals are selectively attached to froth. This process is very critical and important as the extraction of the valuable minerals is decided by this step only while the other two steps determine the separation efficiency between the mineral and the gangue.

2. Entrainment – Under this process of entrainment air bubbles are passed in liquid water to which the froth leads to the generation of air bubbles.

3. Aggregation – In this process, the mineral particles are trapped by the froth.

An important criterion of the separation of minerals by the froth floatation method is that the size of the particles of the ores must be very small equivalent to powder form. This is very important because the heavier and bigger particle would require a greater adhesive force without which they would no longer attach to the froth and settle down in the bottom. Thus separation will not be possible.

1. Direct floatation technique – In this method, the mineral sticks to the air bubble and the remaining gangue settles down at the bottom.

2. Reverse floatation technique – In this method, the gangue sticks to the air bubble and ore particles settle down in the bottom.

The process of froth floatation starts with the Comminution process in which the surface area of the ore is increased. First of all, the ores are crushed into very fine powder-sized particles and mixed with water. The mixture obtained is called Slurry. A Collector which acts as a surfactant chemical is added to the slurry. This is done to enhance the hydrophobic nature of the mineral.

The slurry has now been converted into pulp. This pulp is added to the container filled with water and then air jets are forced into it to create bubbles. The required mineral is repelled by water and thus gets attached to the air bubbles. As these air bubbles rise up to the surface with mineral particles sticking to them, these are called froth. This Froth is separated and further taken for the next process of refining and extraction. 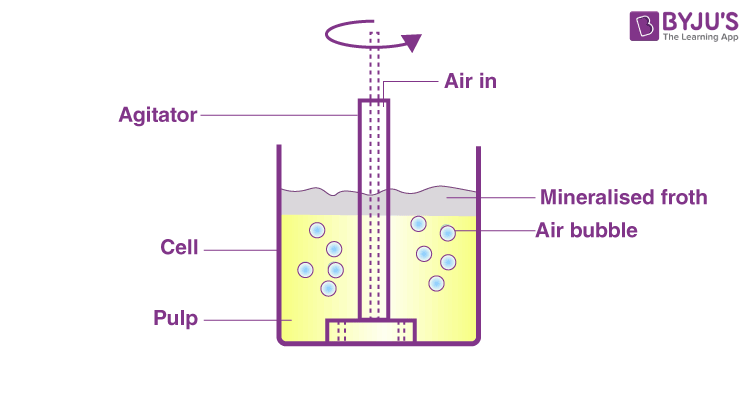 When we dealing with the process of froth flotation we should note that it is not solely dependent upon the density of the material. In addition, the froth flotation process is also dependent upon its hydrophobic nature. For example, as we have discussed above froth flotation is a technique that is used widely in the mining industry. Using this technique, particles of interest are physically separated from a liquid phase. This can be done mainly due to the differences in the ability of air bubbles to selectively adhere to the surface of the particles which is again based on their hydrophobicity. The hydrophobic particles containing the air bubbles that are attached to it are carried to the surface. This results in the formation of the froth that can be removed. Hydrophilic materials usually remain in the liquid phase.

The basic principle applied in the process of Froth Flotation is the difference in the wetting ability of the ore and remaining impurities. The particles are categorized into two types on the basis of their wetting ability;

If the minerals are of Hydrophobic nature then only can get attracted toward froth and not with water. Once these minerals come to the surface with the help of buoyant force applied on the froth, the particle-bubble contact will be intact only when there is the formation of a stabilized foam. The deciding factor of the stability of the froth is the strength of the attachment of the bubble to the mineral. This is calculated with the help of YOUNG-DUPRE EQUATION. This equation gives the relation between the strength of attachment and the interfacial energies.

Flotation is typically conducted in rectangular or cylindrical mechanically agitated cells or tanks including flotation columns, Jameson Cells or deinking flotation machines. While this method is based on the air absorption concept, there are significantly two distinct groups of flotation equipment namely pneumatic and mechanical machines. With pneumatic machines, we obtain low-grade concentrate and little operating trouble.

Mechanical cells, on the other hand, have a large mixer and diffuser mechanism at the bottom of the mixing tank. This is set in such a way as to allow air to flow and provide seamless mixing action. Flotation columns also make use of air spargers that allows us to introduce air at the bottom of a tall column. The slurry is introduced above. The motion of the slurry flowing downwards and the air flowing upwards sort of generates a mixing action. Mechanical cells have a high throughput rate. However, the material produced is of lower quality.

A common industrial column cell consists of a long cylindrical tank fitted with a feed inlet pipe in the upper portion of the cylinder. Two launders are also connected, one internally and one externally to collect and separate the foam. In the lower portion of the cylinder, an outlet pipe is also connected to remove the slurry and the non -floating material. Pipes for proper drainage and many nozzles for re-pulping are also fitted in the lower section of the column.

Many obstructing panels are also fitted in the column to ensure proper and uniform mixing inside the tank. The number of such panels depend on the geometry and size of the tank. A gas bubble generator system that is utilized for the generation of the bubbles is also fixed at the bottom of the column. A froth washing system, whose purpose is to separate the impurities from the froth, is attached to the top of the tank. 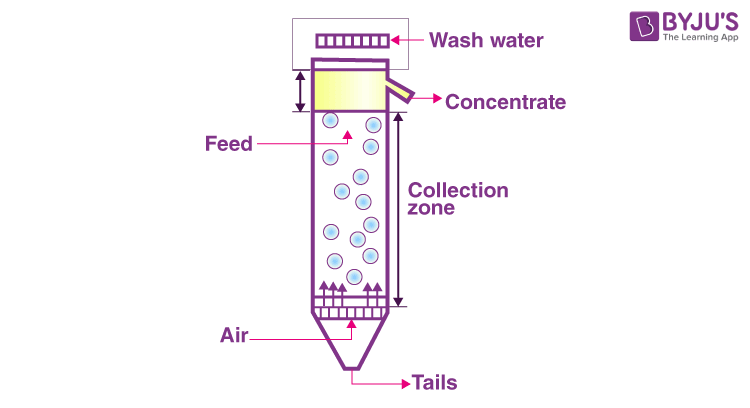 These methods are extensively utilized for metals of low reactivity generally sulphur compounds. Sulphide ores can be easily wetted by the oils which will float on water. These minerals are first converted into a fine powder and then mixed with water. After that pine oil is poured into this slurry. Then Air bubbles are created by injecting high-pressure air. Thus the sulphide ore comes on the top with the froth and oil. The remaining gangue particles which did not dissolve in oil settle down. The foam is removed and taken for further processing. Thus the minerals are separated by the froth-flotation process. This method is extensively utilized for Copper sulphide, lead sulphide and Zinc sulphide.

A collector is such a type of organic compound that selectively attaches to the surface of the minerals and adds water repelling nature to the particles, a very critical factor for the adhesion of mineral particles to the air bubble.

Non-Ionic collectors: These are simple hydrocarbon oils that are needed to increase the water-repelling nature of those minerals which have low hydrophobic strength such as coal. This is done by selective adsorption of oils by the minerals. Examples of non-ionic collectors are Fuel oil and Kerosene oil.

Anionic collectors: These collectors consist of a non-polar part and an ionic part in the anionic part of the compound while the cationic part has no important function enhancement of hydrophobic nature.

Examples of carboxylates are salts of oleic acid and linoleic acid. Soaps generally are more beneficial compared to other ionic collectors because they have a long chain of fatty acids and can easily dissolve in water. These anionic collectors can be used for the separation of ores of alkali metals and alkaline earth metals like calcium, magnesium, barium, strontium etc.

Cationic collectors: in such collectors, the cationic part of the compound plays a very important role in increasing the surface properties of the mineral. The ionic part is generally the nitrogen of the compound amines. They undergo physisorption and get bonded to the mineral through electrostatic force of attraction. Due to this reason these cationic collectors have low adhesive force.

Frothers These are the group of compounds that help to stabilize the foam. Apart from stabilizing the bubbles they also help in the effective removal of foam and separation of gangue. The desired properties of a typical frother are that it should be able to generate foam so that minerals can be separated. They must be easily soluble in water with a fair degree of homogeneity.

Frothers can be divided into two parts;

These reagents activate the mineral surface towards the action of the Collectors, by enhancing their chemical properties. Therefore, they are often called friends of collectors. Generally, they are easily ionizable soluble salts that react with the mineral surface. A very common example of an activator is in the case of the Sphalerite ore in which zinc is easily separated by the formation of zinc -Xanthate.

These reagents deactivate the mineral surface towards the action of Collectors, by changing their chemical properties. Hence, they are also called the enemies of the Collectors. They increase the Selectivity of flotation, by preventing one mineral from flotation while allowing another mineral to float unrestricted.

Depressants can be classified into two categories;

pH is also a very important factor in the process of floatation. Even a slight change in the pH of the slurry can result in loss of productivity and efficiency of the operation. Thus to ensure the optimum use of the resources and production is maximum pH modifiers are used. Lime, Sodium carbonate, Sodium hydroxide and Ammonia are often used to maintain the basic nature of the slurry whereas Sulphurous and Sulphuric acids are used to maintain the acidic medium.

Advantages and Disadvantages of Froth Flotation

Some of the advantages of froth flotation are:

The main disadvantage of the froth flotation process is that this method is highly complex and expensive. The results can vary as it can be easily influenced by the slime. 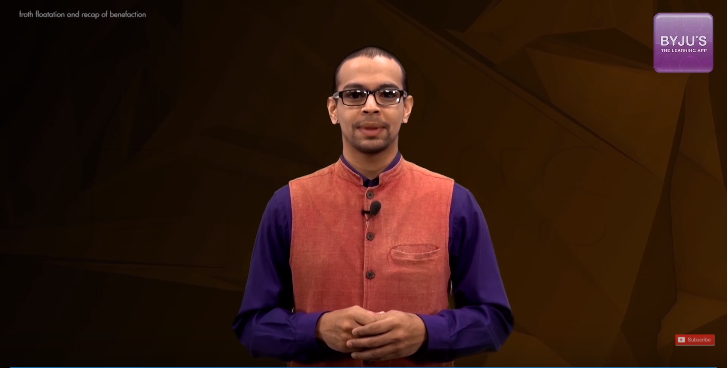 What is the froth floatation process?

The Froth Floatation process is a technique to separate hydrophobic material from hydrophilic material in wastewater treatment industries or mineral industries.

Give an example of froth stabilizer.

Aniline is used as a froth stabilizer for the processing of sulfide ores.

Why is pine oil used in froth floatation?

Pine oil is used in froth floatation to attract impurities from the ore.

Write an example of organic depressant.

Starch is an example of an organic depressant.

Give an example of an inorganic depressant.

Sodium cyanide is an example of an inorganic depressant.
Test Your Knowledge On Froth Flotation Process!
Q5