Algae exist in environments ranging from oceans, rivers, and lakes to ponds, brackish waters and even snow. Algae are usually green, but they can be found in a variety of different colours. For instance, algae living in snow contain carotenoid pigments in addition to chlorophyll, hence giving the surrounding snow a distinctive red hue.

Read on to explore more about the types and characteristics of algae in the algae notes provided below. 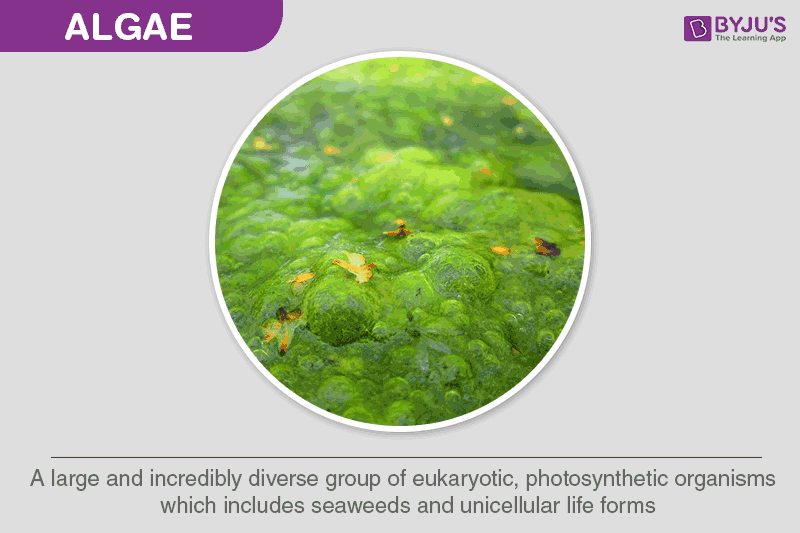 “Alga is a term that describes a large and incredibly diverse group of eukaryotic, photosynthetic lifeforms. These organisms do not share a common ancestor and hence, are not related to each other (polyphyletic).”

Most algae require a moist or watery environment; hence, they are ubiquitous near or inside water bodies. Anatomically, they are similar to another major group of photosynthetic organisms – the land plants. However, that is where the differences end as algae lack many structural components typically present in plants, such as true stems, shoots, and leaves. Furthermore, they also do not have vascular tissues to circulate essential nutrients and water throughout their body.

Specific general characteristics of algae are common to plants as well as animals.

For instance, algae can photosynthesize like plants, and they possess specialized structures and cell-organelles, like centrioles and flagella, found only in animals. Listed below are some of the general characteristics of algae.

There are many types of algae. However, these are some of the more prominent types:

Also called Rhodophyta, it is a distinctive species found in marine as well as freshwater ecosystems. The pigments phycocyanin and phycoerythrin are responsible for the characteristic red colouration of the algae. Other pigments that provide green colouration (such as chlorophyll a) are present. However, they lack chlorophyll b or beta-carotene.

It is a large, informal grouping of algae having the primary photosynthetic pigments chlorophyll a and b, along with auxiliary pigments such as xanthophylls and beta carotene.

Not an Algae: Blue-Green Algae

In the past, blue-green algae were one of the most well-known types of algae. However, since blue-green algae are prokaryotes, they are not currently included under algae (because all algae are classified as eukaryotic organisms).

Also called cyanobacteria, these organisms live in moist or aquatic environments just like other algae. These include dams, rivers, reservoirs, creeks, lakes and oceans. This class of bacteria obtains energy through the process of photosynthesis. Ecologically, some species of blue-green algae are significant to the environment as it fixes the nitrogen in the soil. Hence, these are also called nitrogen-fixing bacteria. E.g. Nostoc, Anabaena, etc.

However, other types of blue-green algae can be toxic to human beings. They can either be neurotoxic (affects the respiratory or nervous system, causing paralysis) or hepatotoxic (causes the liver to fail). Moreover, some can act as indicators of environmental health, signalling the extent of pollution.

Prominent examples of algae include:

Recent developments in science and technology have enabled algae to be used as a source of fuel. Global demand for petroleum products and declining environmental health have prompted the use of eco-friendly alternatives such as algal biofuel. Hence, algae fuel is an increasingly viable alternative to traditional fossil fuels. It is used to produce everything from “green” diesel to “green” jet fuel. It is similar to the other biofuels made from corn and sugar cane.

For more information about algae, its types and characteristics of algae, or any other concepts in biology, explore BYJU’S Biology.

Algae is a large, diverse group of eukaryotic, photosynthetic organisms that are not necessarily related to each other.

2. How are algae different from traditional plants?

Unlike traditional plants, algae do not have true roots, stems and leaves. Hence, they need to be near a moist or watery environment to survive. In other words, they do not possess vascular tissue necessary for the conduction of water and minerals.

3. Briefly outline the types of algae.

Algae are primarily classified into the following types:

4. State the general characteristics of algae.

6. Are algae bacteria or a plant?

Algae are neither bacteria nor plants. The term algae is used to describe a large collection of photosynthetic, eukaryotic organisms.

7. Are algae toxic to humans?

Algae are generally harmless to humans. However, certain species of algae can form algal blooms, which can have detrimental effects on human health and the environment.

8. How are algae useful?

Algae are known to fix 50% carbon dioxide. Being photosynthetic, they increase the oxygen content of their environment. They are primary producers and many organisms derive food from them. Many commercial products are obtained from algae such as align, etc.

9. Why are algae important?

Algae form the primary source of food for many organisms in the food chain. From an economical perspective, algae are very useful for creating biomass or fertilizers as they grow very fast.

Algal bloom is the rapid increase in the algal population in a water body such as rivers or lakes. Often, it is characterized by discolouration of the water and a peculiar odour.

Register at BYJU’S for easy and interesting algae notes. Refer to these notes for reference.