A lichen is not a single organism but a symbiosis among different organisms like fungus and a cyanobacterium or algae. Cyanobacteria are also referred to as blue-green algae despite the fact of being distinct from algae.

The fungal partner is viewed to be composed of filamentous cells and every filament is known as hypha. These hyphae may branch but maintain a constant distance and grow by extension. There are a few lichens with filamentous structure among the photobionts while others consist of chains of more or fewer cells.

The species of Ascomycetes or Basidiomycetes are the most common fungi in lichens. The common algal partners are either green algae Chlorophyta or Cyanophyceae family of blue-green bacteria. Normally, fungal partners cannot live without its phycobiont, but algae are often capable of living independently in water or moist soil. The largest lichen can make a thallus up to 3ft long, although most of them are smaller than a few centimetres. They are colourful, ranging from yellow to greens and black hues.

Mostly, lichens grow slowly. The one in which the phycobiont is a blue-green bacterium has the ability to convert nitrogen gas into ammonia. Some can reach the age of many centuries, mainly the one living in stressful environments such as arctic tundra or alpine. 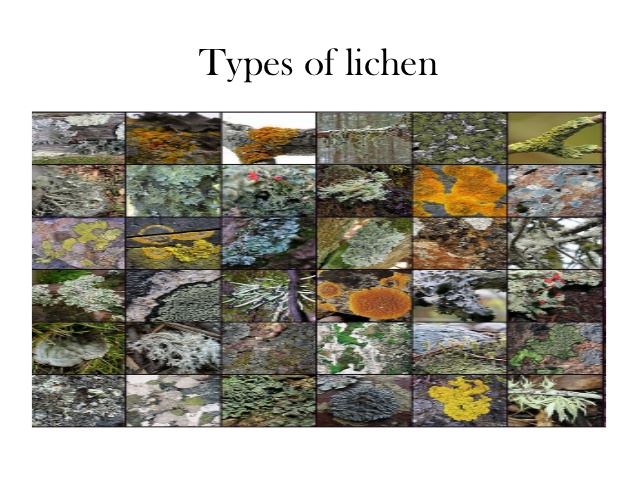 The growth form in which the lichens are leafy or bush-like are termed macrolichens. The other forms are called microlichens.

Lichens exist in one of the below-mentioned growth forms.

Likewise, lichens can also be seen in various colours like yellow, orange, red, brown, etc. These colours are due to the presence of special pigment called usnic acid. In the absence of this pigment, they are generally olive gray or green.

As per the diversity of basic growth, lichens have an identical internal morphology. The filaments of the fungal partner form the bulk of lichen’s body, and the layers in the lichen are defined by the relative density of these filaments.

The filaments are packed closely at the outer surface to form cortex that helps in contact with their surroundings.

The algal partner cells are not distributed below the cortex as the fungal filaments are scattered. The medulla is below the algal layer which is a loosely woven layer of fungal filaments. There is another layer beneath the medulla in foliose lichens and is in direct contact with the underlying substrate in squamulose and crustose lichens.

Where are lichens found?

Lichens cover around 6-8% of the Earth’s surface and are found in a variety of environmental conditions. They occur from high alpine elevations to low sea levels. Lichens abundantly grow on tree barks, mosses, rocks, roofs, leaves and also on other lichens.

What are some uses of lichens?

Lichens produce pigments and other secondary compounds that can be used as dyes. In some parts, they are used as delicacies and also in traditional medicine. Some lichens can also degrade polyester resins and pollutants like lead and copper.

How do lichens respond to environmental stress?

Lichens grow in a wide range of environmental conditions. But they are sensitive to atmospheric pollutants like sulfur and nitrogen. Air pollution leads to a decline in the lichen population and thus, they can be used as indicator organisms.

To learn more about the Lichens, download BYJU’S-The Learning App.

Test your knowledge on Lichens
Q5